Supported by UN Women and UNICEF Innovation Labs, young people in Kosovo have developed innovative solutions to address violence against women. An initiative that boosts economic opportunities of violence survivors, and an app that educates teenagers about sexual health and rights are making strides. 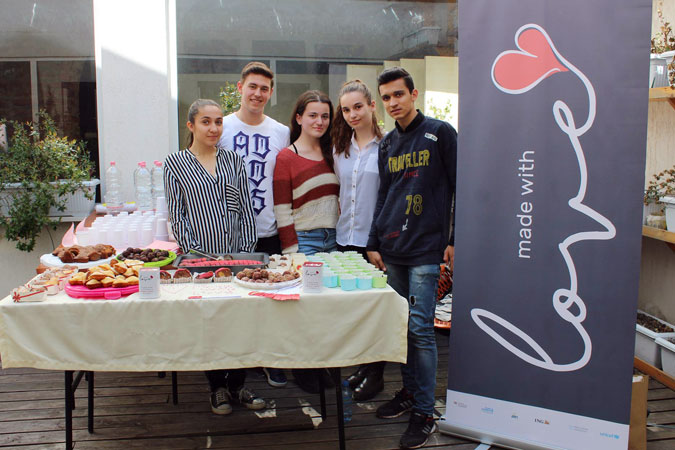 Members of the Made with Love team sell baked goods made by survivors of violence. UN Women/Ina Cenko

Harnessing the power of innovation and technology, young people in Kosovo[1] have joined efforts to empower survivors of violence and to educate youth about their sexual health and rights.

The UPSHIFT Social Impact Workshop, organized by UN Women and the Youth for Youth Programme of UNICEF Innovation Labs, as part of the 16 Days of Activism against Gender-Based Violence campaign in November 2016, brought together 45 young Kosovans to generate solutions to some of the most pressing issues of gender equality in their communities. Five winning teams received 2000 Euros each and three months of mentorship with experts to develop their ideas and prototypes. Now some of the ideas are being implemented, and with promising results.

“Made with Love”—a team of young people aged 15-18 years, from Gjakova, western Kosovo— developed an initiative to boost economic opportunities for survivors of domestic violence living in safe houses. The group engaged local organizations in providing trainings to survivors to improve their financial skills and connecting them to local markets. For those who wanted to produce and sell food items, such as sweets and pastries, the initiative provided additional cooking tools, and ingredients. The team also set up stalls to sell the products at various events, where they displayed information and messaging to raise awareness about domestic violence. All proceeds from the sales went directly to the women who produce the goods.

Dhurata Sefa, a Made with Love team member, describes the initiative as “sweet, happy and above all, loving.”

“Every time we visited the safe house, the smiles and the joy on the faces of women and children was indescribable…They were all very grateful and taught us how to appreciate our lives. The whole journey was a lesson for the team,” said Sefa. 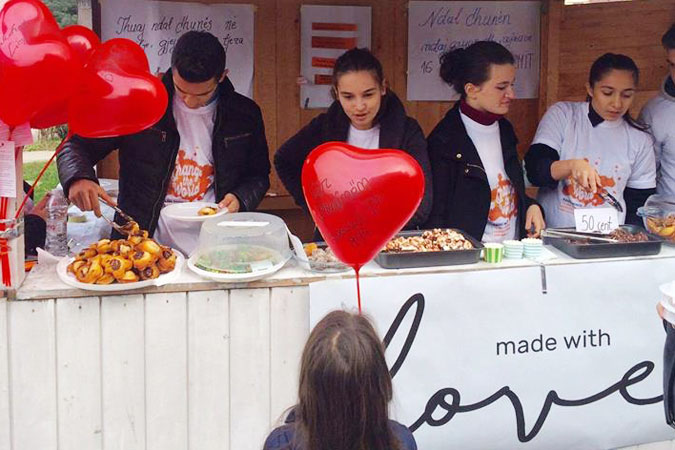 Members of the Made with Love team sell baked goods made by survivors of violence. UN Women/Ina Cenko

The three-month project was so successful that it was extended for another three months and secured the financial support of the Organization for Security and Co-operation in Europe (OSCE) and other donors.

The team has since been invited to several events, such as TEDx Tirana and the Conference for the Security of Women, organized by the United Nations Mission in Kosovo, to talk about the issue and their experience.

Another successful project that came out of the UPSHIFT Social Impact Workshop was “Shnet” (which means “health” in Albanian, the official language of Kosovo). A team of four psychology students from the University of Prishtina built Kosovo’s first digital application that provides free sexuality education for adolescents and youth, aged 13 – 18 years. The project aimed to equip teenagers with accurate information about their bodies and sexual health and rights.

The Shnet team members faced numerous challenges while developing the app. It wasn’t easy to translate specific terminologies in Albanian and many school administrations were hesitant to support their project. But for the team, the challenges were worth it once they could present the app to students.

“For each of us, it was a new experience, because it was the first time we were creating an app. Knowing that we were creating an educational information tool for adolescents and young people, our sense of responsibility grew even more,” said Dea Rexhepi, a Shnet team member.

Supported by UNICEF Innovation Labs, the application was further developed in close cooperation with Nebula, a software development company in Kosovo. It provides information about various sexual health issues including sexually transmitted diseases, abortion and sexual rights, explained in simple and friendly language. In the last five months, Shnet has been downloaded by over 2000 Android users, who are mainly high school students. The application is free; and available in Albanian, Serbian and English. It has been promoted in schools around Kosovo and on the media, and has received positive feedback and support from students and teachers alike.

“Until now, we discussed sexual issues only with friends and did not have access to accurate information. The application is practical because you can easily download it on your phone. Most importantly, the information is reliable and the app is safe,” said Ema Krasniqi, a high school student from Prishtina.

“UN Women supports young individuals who believe in an equal world and who strive to work towards empowering women and girls in our society. This project shows how young people can lead in raising awareness and knowledge on gender equality and gender-based violence among other youth. With education and knowledge, the harmful attitudes and behaviours that drive this violence and inequality will start to change,” said Linda Sanaja, UN Women project analyst.

Other initiatives emerging from the UPSHIFT Social Impact Workshop include a gender-neutral career counselling programme, which connects young students to internships and apprenticeships, regardless of their gender. Recognizing the cycle of inter-generational poverty among vulnerable women and girls who are cut off from educational and employment opportunities, another team created an educational programne to spread job and skills training information to girls and young women through the school system.

[1] All references to Kosovo shall be understood to be in full compliance with UN Security Council Resolution 1244 (1999).

Related News
In the words of Claudia Macz Chen: “I know the challenges for indigenous girls, I've had to overcome them myself”
I am Generation Equality: Nicholas Niwagaba, young leader, human rights advocate
I am Generation Equality: Abel Koka, champion for youth and reproductive rights
Every victim of violence must have prompt access to the full range of essential services" — Executive Director
“Son preference” Perpetuates Discrimination and Violations of Women’s Rights — It Must and Can End
END_OF_DOCUMENT_TOKEN_TO_BE_REPLACED