In the words of Nongnee Kondii: “I was told that being a lesbian woman is a sin” 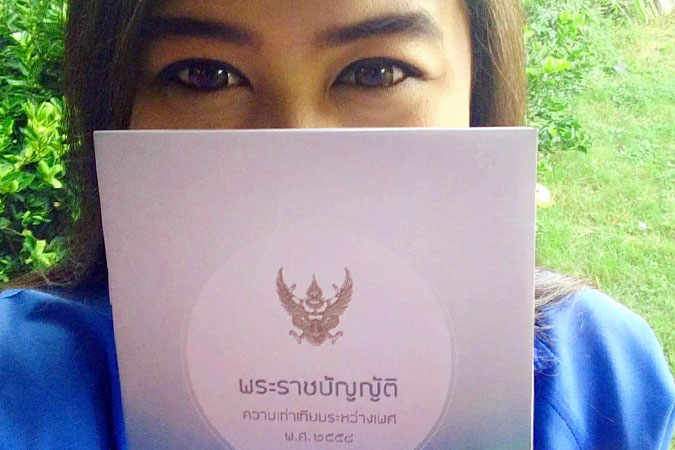 Discriminatory stereotypes, cultural norms and attitudes that normalize and trivialize violence against women and girls are prevalent in every part of the world. Nongnee Kondii*, 25, from Yala, a southern border province of Thailand, never felt safe expressing her sexual orientation at home or in her community. When she experienced a traumatic sexual assault, she kept silent at first. In May 2016, after participating in a gender retreat for young people organized by Rainbow Sky Association(RSAT), an organization that works to promote the rights of lesbian, gay, bisexual women, transgender and intersex persons (LGBTI) in Thailand, supported by the UN Trust Fund to end Violence against Women (managed by UN Women), Kondii decided to speak out and pursue the path of justice. With funding from the UN Trust Fund, RSAT continues to organize workshops with LGBTI individuals in Thailand to support them to combat stigma based on sexual orientation and gender identity.

I fell in love with a girl when I was in 10th grade. It felt right, and we were in a relationship for seven years. When my mother caught us, she separated us. I was sent off to live in my grandfather’s farm house, far from everyone. I was 17 at the time.

I was told that being a lesbian woman is a sin. People in my village gossiped and called me a sinner, a deviant, and a traitor to my religion.

It wasn’t until I went to college that I could express myself as a lesbian woman again.

But then something horrible happened—a man who was helping us obtain a public health certificate, sexually assaulted me and three of my friends. We were terrified and ashamed. I didn’t say a word about this to anyone, until attending the RSAT camp. There, we learned about our rights and the multitude of barriers, challenges and discrimination that we routinely face, because of our sexual orientation.

The experience in RSAT changed the way I saw things. I realized that my friends and I had been targeted and punished because we were lesbians. What happened to us was a punishable crime! I consulted with RSAT and Mae Ann, founder of Baan Boontem shelter, another RSAT affiliated NGO, and requested their support in my pursuit of justice.

When I first tried to report the crime, the police officer questioned why I was there at the police station at all. He wasn’t convinced that our case could be taken to court. I showed him all the relevant articles in the Thai law that would apply to my case. I spent two days reasoning with him. There was no privacy, no private room where I could talk. At one point, he asked me, “how do lesbians ‘do it’?”

When the police identified the perpetrator, with our help, they still suggested that we should drop the charge because the alleged perpetrator was psychologically unstable. But we didn’t give up. Our case went to court and the perpetrator was found guilty of sexual assaults. He was sentenced to 10 years of imprisonment by the Criminal Court of Yala Province.

The court proceedings took one year. After we won the case, seven minors came forward to report that they were assaulted by the same man.

Winning the case and my experience at RSAT camp changed me. If the same thing happens to anyone around me, this time I’m going to be the one to take their hand, take them to the police station, and help them seek justice.”

Note: *The name has been changed to protect the identity of the person