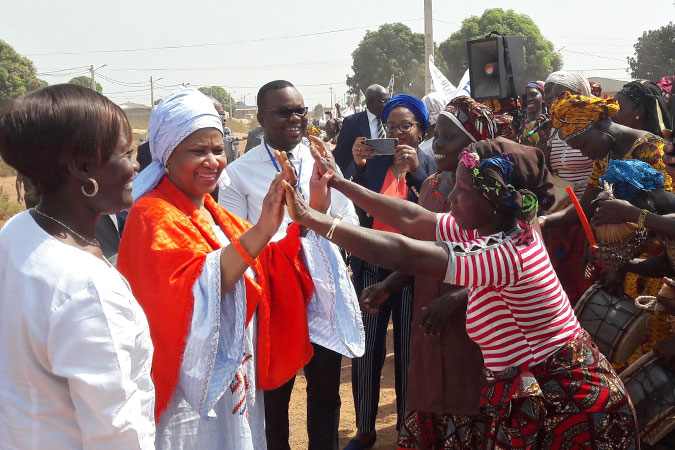 UN Women Executive Director, Phumzile Mlambo-Ngcuka, is visiting Cote d’Ivoire during the 16 Days of Activism Against Gender-Based Violence Campaign. In Côte d'Ivoire, the 16 Days will be marked with the launch of the HeForShe global solidarity movement in the country. Read more» 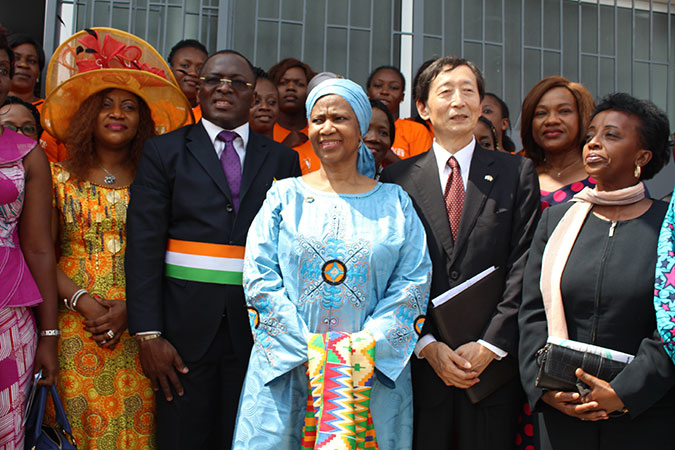 Today, UN Women Executive Director inaugurated the Centre for Women Entrepreneurs of Attécoubé, in the suburbs of Abidjan. With financial support from the Government of Japan, this 200 square-meter centre will facilitate training and coaching sessions for women who already lead companies as well as new and aspiring women entrepreneurs. "This centre is a link between established and starting-up women entrepreneurs, and a chain of solidarity and coaching. It shows a great example of partnership between the UN, the Government, bilateral partners and civil society," said Ms. Mlambo-Ngcuka. Hiroshi Kawamura, the Ambassador of Japan in Côte d'Ivoire, added that he was "proud to see such a centre built in a short time, thanks to the strong involvement of all the actors in the project." 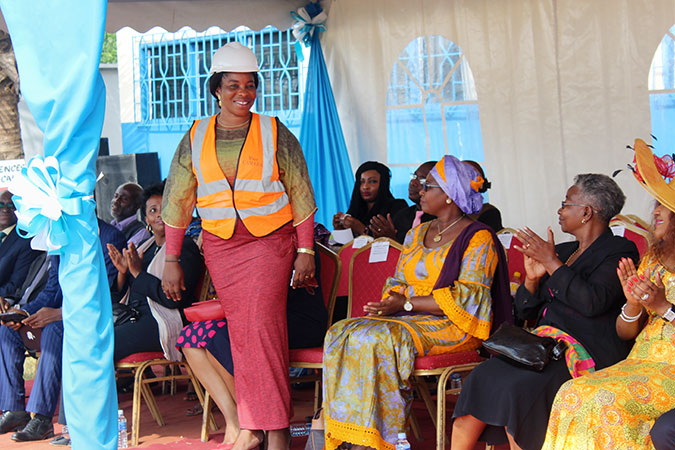 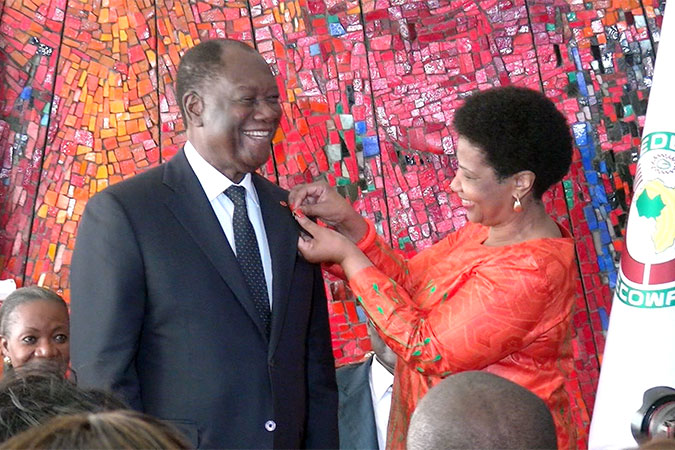 The President of Côte d'Ivoire, Alassane Dramane Ouattara, officially joined the HeForShe global solidarity movement in a ceremony marking the 16 Days of Activism Against Gender-Based Violence. After receiving his HeForShe pin, the President pledged to end female genital mutilation (FGM) and to join efforts to end all forms of violence against women by 2020. 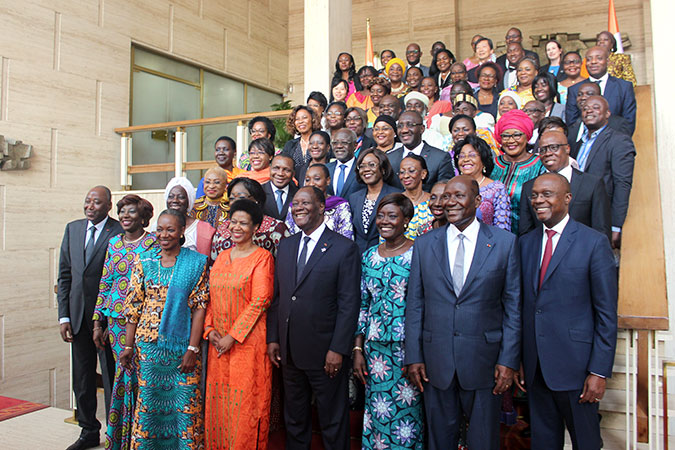 UN Women Executive Director and many Ivorian personalities, including the Chancellor of the Republic, Ms. Henriette Diabaté and the Minister of Women, Protection of Childhood and Solidarity, Ms. Koné, were present. The President also commended UN Women's role in the country, especially in empowering rural women. Ms. Koné highlighted gender equality as a national priority, now enshrined in the new Ivorian constitution.

Ms. Mlambo-Ngcuka also held meetings with the Minister of Foreign Affairs, Marcel Amon-Tanoh; the President of the National Assembly, Guillaume Soro; and the Prime Minister and Minister of Budget, Amadou Gon Coulibaly Marcel Amon-Tanoh.  Discussions focused on the collaboration between the Republic of Côte d’Ivoire and UN Women on issues of common interest in view of supporting the country’s efforts to advance the gender equality agenda. 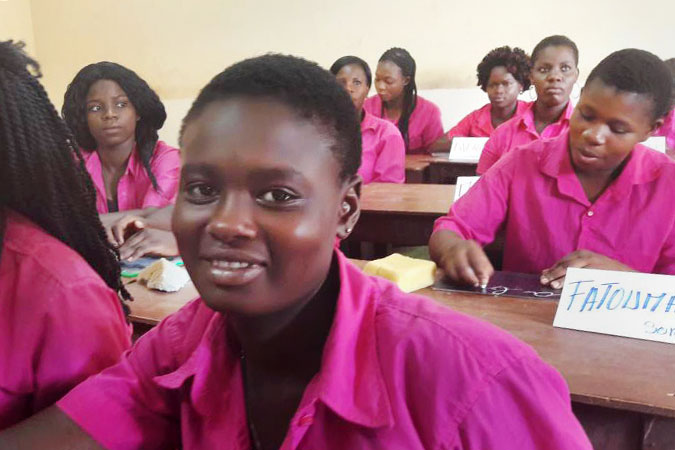 Young girls and women benefit from training at the Institute of Womenís Education, supported by UN Women, in the the town of Korhogo, 700 km from Abidjan. Photo: UN Women/Alpha Ba

UN Women Executive Director, Phumzile Mlambo-Ngcuka, began her visit to Côte d'Ivoire in the town of Korhogo, 700 km from Abidjan, where she met with women and girls attending the Institute of Women’s Education, which is supported by UN Women. The institute provides skills training for women and girls, such as sewing, embroidery, reading and writing, so that they can take up income-generating activities. Ms. Mlambo-Ngcuka was accompanied by the Minister of Women, Child Protection and Solidarity, Mariatou Koné and the Ambassador of Japan, Hiroshi Kawamura. She urged women to ensure their daughters remain at school and avoid child marriage.

The Executive Director also visited a women's cooperative that produces shea butter in the nearby town of Natio Kobadara, where a project supported by UN Women and funded by the Government of Japan, is empowering women farmers and helping them adapt to the challenges posed by climate change. “It is regrettable that only 3 per cent of women are actually land owners, when they are among the most dynamic farmers in this country, overcoming many obstacles,” she said.

The Executive Director met with members of civil society organisations in Abidjan, and discussed the global pandemic of violence against women. . Photo: UN Women/Alpha Ba

In a meeting with civil society organizations in Abidjan, discussions focused on solutions to overcome the various forms of violence that women in the country are experiencing. This includes the new joint EU-UN initiative Spotlight, which is an excellent opportunity to break the vicious cycle of poverty and violence. “Violence against women is the most widespread, the most persistent and the most devastating form of violence. As the 16 Days of Activism are under way, we need to recall that women have rights, and invite men to stand up to defend them, too”, added the Executive Director.

In her exchange with women parliamentarians, Ms. Mlambo-Ngcuka discussed the challenges faced by women in leadership and how to increase their participation in decision-making: "People in this room, you are a power house. You cannot do everything, but you can do a lot. I encourage you to work together to increase the number of women in the upcoming elections and make sure to involve young women”, she said.