Remarks by Under-Secretary-General of the UN and Executive Director of UN Women, Phumzile Mlambo-Ngcuka at the Official Commemoration of the International Day for the Elimination of Violence against Women 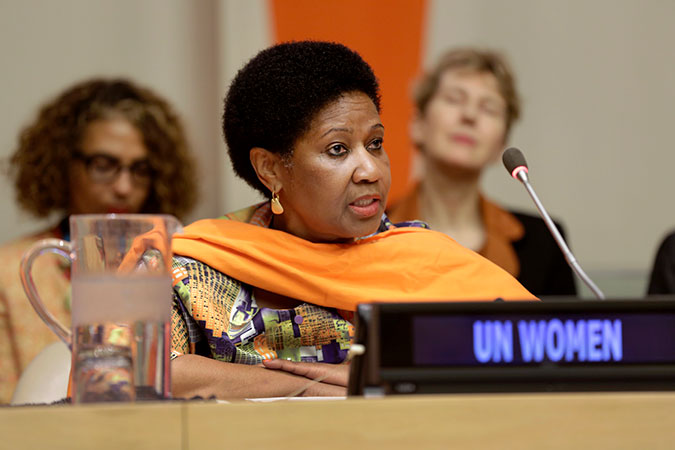 UN Women Executive Director Phumzile Mlambo-Ngcuka speaks at the official commemoration of the International Day for the Elimination of Violence against Women. Photo: UN Women/Ryan Brown

Every year, our global UNiTE campaign, led by the Secretary-General, kicks off the 16 Days of Activism to end gender-based violence. We start the 16 Days by gathering to mark the International Day to End Violence Against Women. Thank you for coming to join us every year as you have done today.

This year, our theme is: “Leave No One Behind”. This theme also supports the new urgent message from the Secretary-General that there is an end date for our campaign, “UNiTE to End Violence against Women by 2030”. This is not open-ended.

This means being there for all of those affected by gender-based violence and leaving no one out. It means especially paying attention to the least visible victims and survivors of violence: the missing adolescent trafficked as a sex slave; the little girl who moves tents in an IDP camp, after being married to an older man, old enough to be her father or grandfather; the baby girl cut with a razor in an FGM ceremony; the woman beaten by her partner behind closed doors; the women’s human rights defender silenced and brutally murdered; the teenager in her bedroom reading bullying messages on her mobile phone; the working women who are harassed and humiliated by bosses and colleagues; the woman tormented because of her sexual orientation. The list goes on.

When we talk about leaving no one behind we want to identify all these different forms of violence that women experience. This violence takes place hidden, but in plain sight, normalized so it is hardly noticeable. It becomes just part of life.

Today we UNiTE again to say this is NOT the world we want to live in.

We stand with women who are finding their voice and summoning their courage to expose powerful men who prey on the less powerful.

We note the momentum already created by the #MeToo movement. This moment has exposed how men in authority can become serial perpetrators, and that men’s rise to positions of power does not always mean they respect those they are responsible for leading. It also exposed how frightening it is for young women and young men to come to the front to expose those predators, because there is always the chance that they will not be believed. And it exposed how a culture of entitlement, where there are no consequences for sexual crimes, has left many women tormented in silence.

Sanctions and accountability are critical for behaviour change, and for the coming generations to be socialized differently, so that they know that this is not acceptable.

This is what we want to fight for everywhere: for every woman, for every girl and for every boy.

There must be justice for women everywhere, in all walks of life, focusing also on those women at the base of the pyramid. And there must be zero tolerance, which the Secretary-General has demonstrated with his new policies that we are adopting in the UN.

We must shine today with the colour orange, which is symbolic, and which illuminates the bright future that we wish for every girl and every woman; a life that is free of violence.

The fight to end gender-based violence everywhere is also fought together with partners. These partners are Member States, with whom we fight to break the cycle of violence for good. We also fight alongside civil society.

The Spotlight Initiative, supported by the EU and in partnership with the UN, exemplifies how we can intensify this action. The Secretary-General has described the range of this work, including the work of the 20-year old UN Trust Fund, with its extensive international reach, that has successfully supported civil society organizations all over the world. As we embark on implementing the Spotlight Initiative, we will use the lessons that we have learned from the UN Trust Fund.

We want to find our voices together with you, to speak louder and to speak with each other, and to leave no one behind.