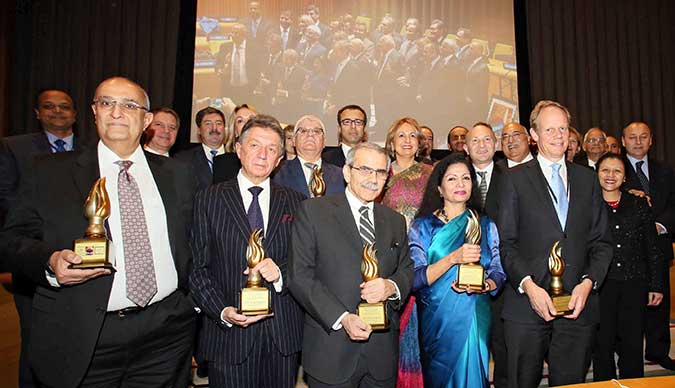 Assistant Secretary-General of the United Nations and Deputy Executive Director of UN Women, Lakshmi Puri was among top six diplomats and luminaries to receive the inaugural Diwali “Power of One” award at an award ceremony held at the UN Headquarters on 11 December.

Ms. Puri was recognized for her powerful advocacy and leadership in ensuring the adoption of a dedicated goal on gender equality and women’s empowerment (SDG 5) within the Sustainable Development Goals, and her championship of the cause through UN Women’s signature campaigns, including Planet 50-50 by 2030: Step it Up for Gender Equality, the HeForShe solidarity movement for gender equality and UN Secretary-General’s UNiTE to End Violence against Women.

Co-hosted by the Permanent Missions of Belarus, Georgia and India to the United Nations, and the Diwali Foundation USA, and backed by a number of other countries, the event marked the first anniversary of the US Postal Service issuing “the Diwali Forever Stamp”.

The United Nations General Assembly recognized the significance of Diwali in 2014, a Hindu festival representing the victory of good over evil and of light over darkness. The "Power of One" award, established by the Diwali Foundation USA, celebrates the important work done around the world to promote peace and development, especially at the United Nations.

Ms. Puri’s human rights advocacy and gender equality championship has won her several other accolades, including the innovative Novus Award for her contribution to the SDGs, the Millennium Campus Network 2015 Global Generation Award, for her work with and for youth, and the prestigious Eleanor Roosevelt Human Rights Award 2016.