The Executive Director of UN Women, Phumzile Mlambo-Ngcuka, will visit Washington D.C., USA, on 12 April to attend a series of events aiming to advance public discourse on gender equality.

Through an interactive conversation, the event will examine key issues of gender equality in both public and private spheres, identify the major factors driving and stalling progress towards women’s economic empowerment, and exchange ideas on effective actions for change.

Later that day, Ms. Mlambo-Ngcuka will join an international panel of judges, lawmakers and legal experts at the “Conflict and Constitutions: Ensuring Women's Rights” discussion, as part of the Second International Symposium on Gender, Law and Constitutions (April 12-13), co-hosted by the United States Institute of Peace (USIP). The panellists will discuss the opportunities that constitutional reforms offer to rethink the rights of citizens, particularly those of women and girls, and practical approaches to drafting post-conflict constitutions.

Constitutions are, for instance, indispensable for the reform of gender discriminatory laws. While there has been a significant growth in gender-responsive constitutions since the 1980s, gender-discriminatory provisions in some constitutions remain, and there is a lack of clear pathway between constitution-making and policy and legislative change that hinders progress towards gender equality.

Related story: Take five: “In too many countries laws still discriminate against women” 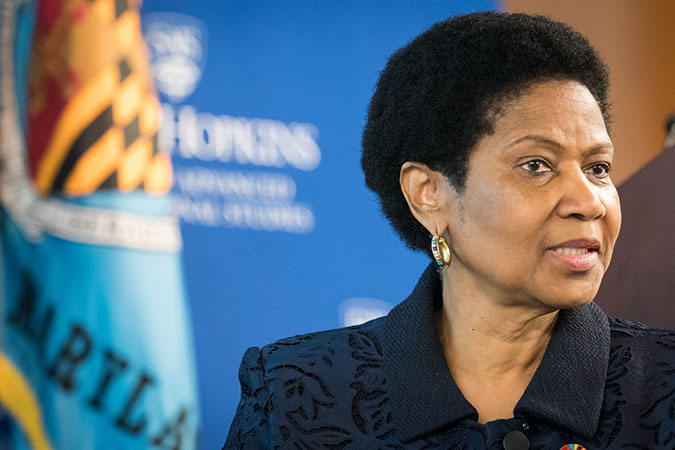 Speaking at a roundtable at the School of Advanced International Studies of the Johns Hopkins University, UN Women Executive Director Phumzile Mlambo-Ngcuka stressed on women’s economic empowerment, by advancing women’s and girl’s digital inclusion, providing second chances in education and employment for girls who had been forced to marry as children, and ensuring that women entrepreneurs benefit from private sector. Photo courtesy of Noel St. John 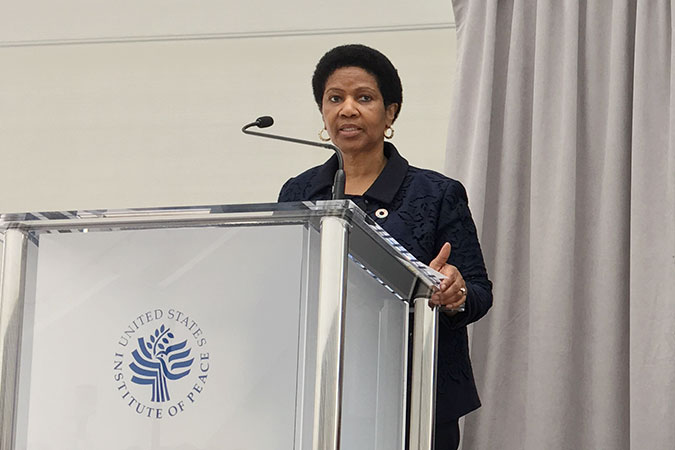 At the panel on “Conflict and Constitutions: Ensuring Women's Rights” co-hosted by the United States Institute of Peace, UN Women Executive Director Phumzile Mlambo-Ngcuka said, "We have seen that if we do not engage and involve women, then the peace is not as endurable and long-lasting as it can be… When women participate in negotiations, they negotiate for their communities, for schools and for clinics. Although we have seen an increase in women in peace negotiations, it has not been enough."
Related News
20/05/2016
UN Women Executive Director meets with President of Finland and key partners
11/11/2015
“Through sport we can teach some of life’s biggest lessons about equality” — Executive Director
23/09/2022
Speech: Taking stronger action to keep the promises of Generation Equality
23/11/2020
Addressing the economic fallout of COVID-19: Pathways and policy options for a gender-responsive recovery
23/08/2019
Op-ed: Every G7 country should have a feminist foreign policy
END_OF_DOCUMENT_TOKEN_TO_BE_REPLACED