From where I stand: “It was my dream to wear the uniform”

Lieutenant Colonel Wafa Sharqawi was among the first women to join the Palestinian Civil Police in 1997, going against all norms. The only family member who supported her decision at the time was her brother, who followed in her footsteps and became a police officer later. Today, Colonel Sharqawi liaises with UN Women and other international agencies on security sector reform and gender-responsive police services. Gender equality is becoming a priority within the Palestinian police force, and public perceptions about women in police are shifting. 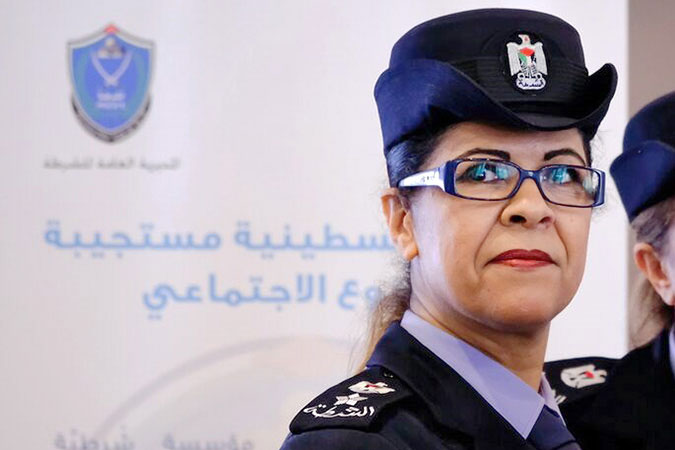 ‘Have you lost your mind?’ was the typical reaction from friends and family when I decided to quit my job as a teacher in UNRWA school at my refugee camp to join the Palestinian Civil Police in 1997.

We were living in the Al Amari refugee camp near Ramallah city. Not only was it unusual for a woman to join an all-male police force, but the public did not trust the security forces.

But, it was my dream to wear the uniform!

I refused to take administrative roles. While serving in challenging positions, such as the head of the Correction and Rehabilitation Center of Ramallah, I strived to set an example for other women.

Almost 20 years later, public perceptions about the police and women in the force are shifting. Today, women make up 3.5 per cent of the Palestinian police force, and 18 women are serving in high ranking positions. There is an active gender unit, the first gender strategy and a professional family protection unit. Gender equality is becoming a priority, within the police.

Palestinian women’s involvement in policing has enhanced the overall credibility of the force and improved our communication with the citizens. I want to see more women joining the police so that the force truly reflects and serves all citizens.

My message for young Palestinian women who are interested in policing as a career is simple—It’s a journey worth exploring.”

Lt. Col. Wafa Sharqawi, 48 years old was among the first women to join the Palestinian Civil Police in 1997. Today, she works in the Office of the Chief of Police’s Assistant for Development and Planning, where she liaises with international agencies on security sector reform. She works with UN Women on promoting gender-responsive police services and increasing the number of women in the police. Her story shows the importance of women’s leadership and participation in the security sector, and relates to Sustainable Development Goal 16, which aims to promote peaceful and inclusive societies and build effective, accountable and inclusive institutions at all levels.