Across rural Africa, women farmers are benefiting from Savings and Loans Groups to grow their businesses. Some 40 per cent of the UN Women’s Fund for Gender Equality grantees in Africa are now using this methodology, leading to better nutrition, business development and sustainable land management outcomes. The Miguéze’ programme, for example, has impacted 2,780 people, and women are emerging as leaders and role models. 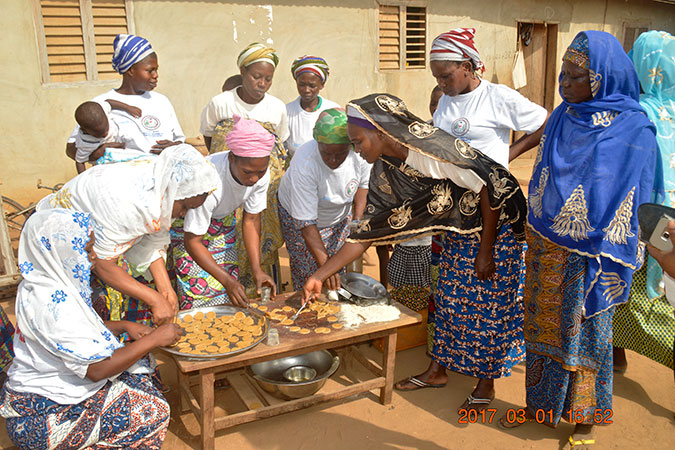 Adja Rainatou is a 35-year-old women living in the Bantè area, in central Benin. She has been farming for years, growing maize, soy, peanuts and cashew nuts, but had no idea if she was making any profit. Accounting was not her strong suite. After joining the Miguéze’ programme in 2016, a Savings and Loans Group supported by UN Women’s Fund for Gender Equality, Rainatou learned basic accounting and book-keeping for the first time. Equipped with new skills, she adjusted the prices of her crops and focused on more profitable crops. “My husband is proud of the knowledge I acquired. Since joining this group, it has had a positive impact on my family financially and also there is more equality within my household now,” says Rainatou.

Mouniratou Djiman, a member of the same Savings and Loans Groups (SLG), took out a loan of USD 40. She bought cashew fruits when the price was low, and a few weeks later, she extracted and sold the nuts for double the price, making a sizeable profit. 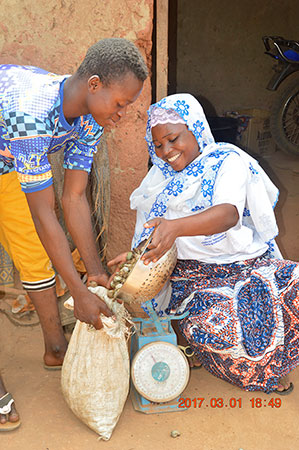 “I like to purchase soja (cashew fruit) when the price is down, then I stock it and sell it when the price is up. But before joining the group, if I wanted a loan, it would have taken me months to gather all the paperwork. By the time I finally get the loan, the price of soja would have climbed up and I wouldn’t be able to make enough profit to pay the high-interest loan. Now it’s simple—I ask for a loan and one week later, I can purchase the soja while the price is still low and I can easily reimburse the loan. Also, the interest is redistributed among the members, so I don’t feel ripped off,” explains Mouniratou.

The rules of a Savings and Loans Group are simple—anywhere from 10 to 35 women come together to form a group. They elect a President, a Secretary and a Treasurer, and every week put their savings into a common pool of funds. After a few weeks or months, any of the members can ask for a loan and must repay it within the next three months, paying an interest rate of 5 - 10 per cent. The loan is used to invest in their businesses—for example, for buying seeds, cattle and tools to increase productivity. The interest is divided between the members of the group, so everyone benefits. The loans do not require asset guarantee, which is particularly helpful for small-scale women farmers who often do not own land or assets.

Some groups also open a solidarity fund composed of the savings of each member of the group, which can be used in the event of emergencies.

“I received a donation from the solidarity fund for my fibroids surgery. I was hospitalized for a week,” recollects Akakpo Cécile de Savalo. In another instance, the group decided to use the solidarity fund to pay for the school fees of Atchade Kassim’s son, who would have been otherwise expelled from school.

The Savings and Loans Groups, sometimes also referred as Self Help Groups, supported by UN Women’s programmes, are usually composed of women, but the National Association of the Women Farmers in Benin (supported by the Miguéze’ programme) has accepted some men. Atchade Kassim, a 45-year-old sheep farmer in Lougba, is one of the few male beneficiaries of the association. With the loan he received, he vaccinated his sheep to avoid diseases and built a pen to protect them. As a result, Kassim’s income increased by 25 per cent and he was able to send his twelve children to school. 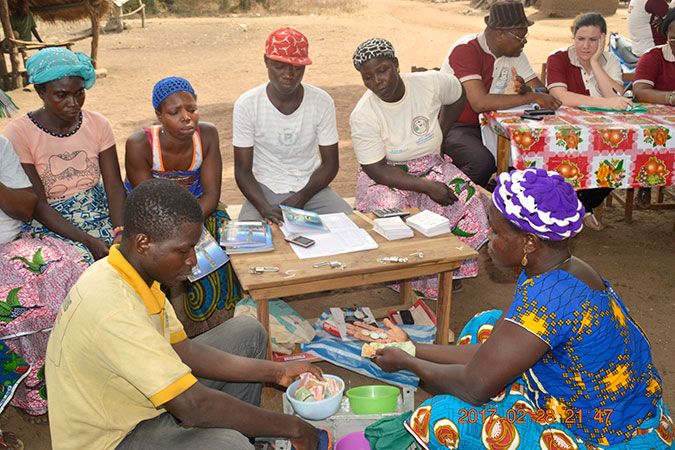 “I strongly believe in the use of Saving and Loans Groups to empower rural women in Africa, as I have seen thousands of lives transformed not only in Benin but also in Tanzania, Cote d’Ivoire and Ethiopia, using this methodology,” says Gaelle Demolis, UN Women Fund for Gender Equality Programme Specialist for Africa. “Right now, these programmes impact thousands of women, but they could potentially impact millions if we could expand them. Once the groups gain some maturity, they would also benefit from institutional support to access the formal and larger loans from government institutions, moving women farmers and entrepreneurs from micro to macro economy,” she adds.

The Miguéze’ programme has impacted the lives of over 2,780 people, mostly rural women, from 2016 – 2017, and many of the women are now recognized as leaders within their communities.

Related News
11/10/2019
Climate-friendly biogas becomes ‘fashionable’ in rural Tanzania
12/09/2019
From Tanzania to Algeria, rural women are taking charge of their lives and livelihoods
07/03/2019
The journey along the gender road in Cameroon
10/01/2019
From where I stand: “Yanouh cooperative increased my income and freedom of movement”
11/06/2018
In the words of Ruth Kihiu: Empowering Maasai women in northern Tanzania
END_OF_DOCUMENT_TOKEN_TO_BE_REPLACED