In Moldova, women survivors rise to break the cycle of violence

Women who have experienced violence and overcome it, know how to end and prevent it—that’s the premise of UN Women Moldova’s Positive Champions initiative. Using a peer-support model, the initiative has supported 44 women across villages and towns to share their experience and inspire women survivors to break the cycle of violence.

Maria Scorodinschi from Drochia, a town in the North of Moldova, experienced violence since she was a child. “I was constantly witnessing violent scenes in my family but I never thought that I would accept such relationship,” says Maria. Yet, for eight long years, Scorodinschi endured a violent and abusive marriage, until the day she realized that living with the aggressor was dangerous not only for her, but also for her three children.

“When I understood that there was a real threat to my children, I took the first and most important step—I left,” recalls Scorodinschi.

Today, Maria Scorodinschi is a “Campioană pozitivă”—meaning “Positive Champion”—helping and inspiring other women survivors of domestic violence to seek help. She has organized several support groups in communities, starting with groups of 10 – 15 women. “When women who are living with violence meet other women who have been through similar situations and succeeded in getting out, they know it's achievable,” says Scorodinschi. “Too often, fear is a woman's biggest enemy. Fight it, because once you break the chain of fear, you will gain courage and opportunities will follow.”

Since 2016, through the Positive Champion initiative, funded by the Government of Denmark and UN Women, UN Women Moldova has supported 44 women survivors of violence to share their stories of hope with other women enduring violence. In just seven months, the “Positive Champions” have met over 1,000 women in 30 villages and towns across Moldova and informed them about their rights. Using this unique peer-support approach, UN Women has significantly increased knowledge and awareness among women about their rights, and more women are requesting and accessing shelters and other support services. For example in Drachia district, in five months since the positive champions started working with women, five times as many women have requested support services.

Violence against women is an endemic problem in Moldova, deeply rooted in cultural norms and entrenched behaviors. About 63 per cent of women have suffered from at least one form of violence perpetrated by their partners, according to the National Bureau of Statistics. Rural women, elderly women, Romani women, women with disabilities and HIV-positive women reported having experienced the highest rate of multiple forms of violence. 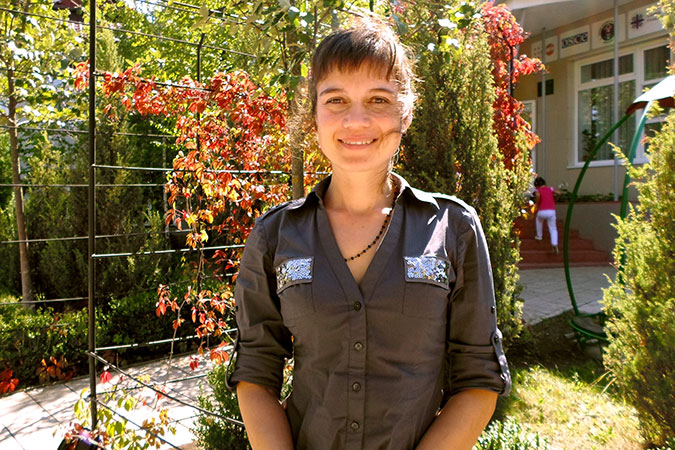 After receiving story-telling training from UN Women, Scorodinschi, who was living in the city of Drochia, went back to her native village to meet with local women survivors. Many of them knew her from the time when she was married, and some knew she was abused by her husband.

Their reaction surprised Scorodinschi: “After hearing my story, they trusted me and they opened up. There were women in high-level positions in local public institutions who were in tears.”

The experience of being heard and recognized is empowering for the Positive Champions and the survivors they work with. Rodica Carpenco, aged 40, who had survived nine years of abuse and now a Positive Champion, explains: “In seven months, I visited 12 villages and met with more than 100 women. After an honest discussion, they gained confidence and shared with us about what was happening in their families. It is very hard to take the first step. Women need to know they are being listened to.”

Rodica, Scorodinschi and other Positive Champions were also at the forefront of last year’s annual 16 Days of Activism against Gender-based Violence campaign in Moldova. They publicly shared their experiences and advocated for protecting women from violence. Since then, they have received awards and recognition for advancing human rights in Moldova.

“The women who have experienced and overcome domestic violence know how it can be eliminated. We are here to join our efforts and work with women survivors of violence, so that other women could follow their example and emerge out of the vicious cycle of violence,” said Ulziisuren Jamsran, UN Women Country Representative in Moldova.

In Moldova, Positive Champions are becoming a household name. Increasingly, they are being perceived by public authorities, media and citizens as the real experts in combating and preventing domestic violence. Their experience fed into Moldova’s National Strategy for Prevention and Elimination of Domestic Violence, which UN Women assisted the government in drafting. This year, public authorities from different sectors across five districts in Moldova will engage with the Positive Champions to test new models of multi-disciplinary response to domestic violence. This initiative is part of UN Women's Flagship programme: Prevention and access to essential services to end violence against women.

Related News
12/11/2021
Believe Survivors. Act Now. Milena’s Story, Moldova
15/11/2016
From where I stand: Maia Țaran
28/09/2016
Moldovan NGOs innovate to stop violence against women
11/04/2022
Speech: Women’s involvement is both a right and an opportunity for better outcomes
20/03/2021
Statement by UN Women on Turkey’s withdrawal from the Istanbul Convention
END_OF_DOCUMENT_TOKEN_TO_BE_REPLACED