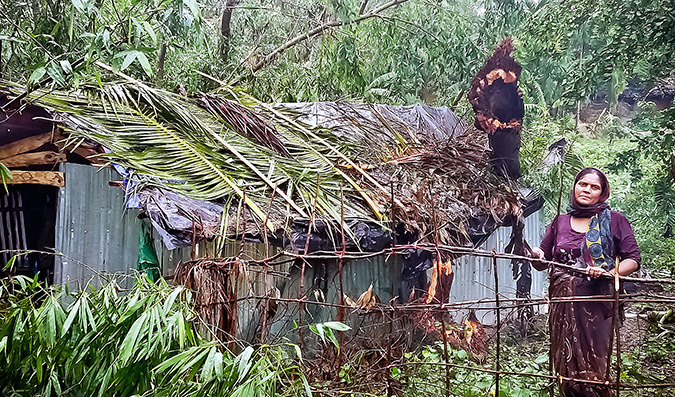 UN Women in partnership with the Office of the United Nations High Commissioner for Refugees (UNHCR) is helping provide emergency shelters and other supports to ensure the safety and protection of thousands of women in the two Rohingya refugee camps in Cox’s Bazar district in southeast Bangladesh that was struck by Cyclone Mora on 30 May 2017. At least 27 refugees were injured by the storm.

In the Kutupalong and Nayapara camps, 70 per cent of houses were damaged or destroyed, according to a preliminary assessment by UN Women and UNHCR. One-quarter of the buildings in the camps have been damaged, including community and health centres, birth clinics, schools, dormitories for female police officers, warehouses, and offices of the camp administration and of non-government aid organizations. Electricity has been cut off and is not expected to be back for days. The refugees now need safe shelter, food, fuel, electricity, health services and protection.

Eighty per cent of the camp residents are women and children who already lived under challenging conditions with unmet basic needs and protection concerns before the cyclone. The risks to their safety have now been heightened by their displacement by the cyclone and the loss of safe shelter and proper lighting. The women have reported not feeling safe staying in the temporary emergency tents or going to the toilet at night.

UN Women and UNHCR are providing plastic sheets, ropes and other items to people in the two camps for emergency shelter, and are planning to distribute solar lamps for temporary lighting and electricity supply. Rohingya women-led support groups that UN Women and UNHCR had jointly established in the camps as part of a pre-existing project are creating safe spaces for women affected by the cyclone. Women Support groups, as well as groups of men and youths established by the same project, are helping support women repair shelters and set up temporary shelters, especially for single women and single mothers.  These efforts will promote the participation and leadership of women in the relief and recovery, which is essential if the worst-affected women are to be reached.

UN Women stands ready to support the Government of Bangladesh and the humanitarian coordination team to ensure that the cyclone relief and recovery efforts promote gender equality and women’s empowerment.

Read the full story on UN Women's regional website for Asia and the Pacific.

Related News
16/04/2020
Women mobilize to prevent COVID-19 in crowded Rohingya refugee camps
28/02/2018
Solar lamps, alternative fuel, feminine hygiene products—relief that counts in the practical needs of Rohingya women refugees
02/02/2018
“I want to help other women”—Rohingya women strive to reclaim a life of dignity
07/12/2021
In Cox’s Bazar, gender-responsive policing efforts build trust with Rohingya women and girls
07/10/2021
From where I stand: Learning sessions gave me the courage to aim for a career as a police officer and end illegal behaviour against women
END_OF_DOCUMENT_TOKEN_TO_BE_REPLACED