Parental leave is the key to economic prosperity 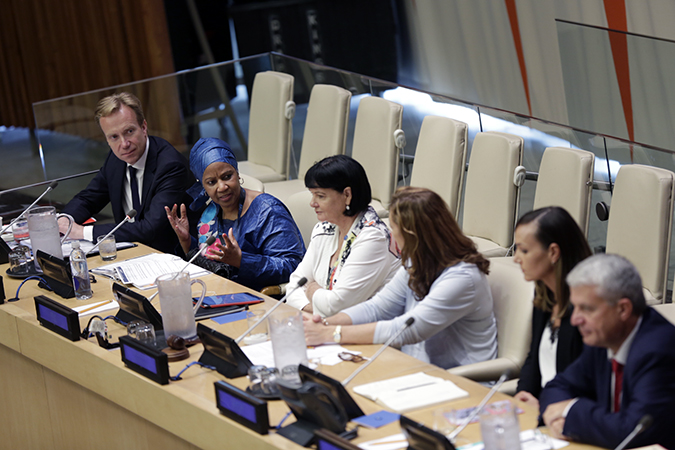 Today on the margins of the 72nd UN General Assembly, a high-level discussion hosted by the Nordic Council of Ministers under Norway’s Presidency and UN Women put the spotlight on the issue of paid parental leave.

Women’s economic empowerment is a key pillar of sustainable development and growth. Yet, only about 50 per cent of working age women compared to 76 per cent of men are represented in the labour force globally today, and women take on 2.5 times more unpaid work than men. Unequal pay, disproportionate burden of unpaid care work, and lack of paid parental leave for women and men, are ultimately holding back women in the world of work.

Paid parental leave is not only a matter of rights, but smart for the economy, the participants stressed.

“Economic growth depends on optimal use of the workforce. Getting women back to work, affordable child care and paid parental leave makes it possible for both parents to go back to work,” said Børge Brende, Minister of Foreign Affairs of Norway, adding that gender equality has played a key role in Norway’s economic development.

“If you want women in the workforce, you must invest in care,” said Sharan Burrow, General Secretary of the International Trade Union Confederation, citing research that shows, “two per cent of investment in care in any economy will generate six per cent growth in the economy.”

“In Norway, we started back in the 80-s…to give paid parental leave for a full year. The female workforce participation has gone up from mid-40 per cent to mid-70 percent,” shared Kristin Skogen Lund, Director General of the Confederation of Norwegian Enterprise.

Beyond paid parental leave, participants also drew attention to the provision of child care that is affordable to all families. “It is important to understand that affordable child care is a basic security that makes people more flexible in the labour force,” said Dagfinn Høybråten, Secretary General of the Nordic Council of Ministers.

“When women have children, they are ‘rewarded’ with the motherhood penalty” - ED @phumzileunwomen #nordicsolutions #UNGA pic.twitter.com/d5necvSw9p

“The information is not reaching enough policy-makers…” she added, “public policies have to care and create enabling environment for employers.”

Isa Notermans, Global Head of Diversity and Inclusion from Spotify, shared her own experience of taking six months of parental leave and how it benefited her and encouraged other women in the business to take the full parental leave. “In countries where it’s not a norm yet, we have to share the stories of success,” she said.

The culture changes with legislation - that is the way forward when it comes to paternity leave says @NHOkristin pic.twitter.com/toH5WfZDnY

The discussion also highlighted the importance of regulations and legislations as a starting point in changing cultural norms and behaviours around equal participation of men and women in care work at home.

Related News
09/03/2018
From where I stand: Using blockchain technology to empower women
18/10/2019
In Colombia, peace is a journey
22/05/2019
UN Women Deputy Executive Director joins the call to end sexual and gender-based violence in humanitarian crises at the Oslo Conference
15/10/2018
From where I stand: “Women don’t have to follow orders from men…women have rights too”
12/10/2018
Empowering women farmers in Rwanda to grow better crops, better food and incomes
END_OF_DOCUMENT_TOKEN_TO_BE_REPLACED