Getting women farmers back on their feet in Dominica

Six months on, since the Category 5 hurricane battered the small island nation, UN Women assessment shows what women want is assistance to get back on their feet and back to work, not handouts. 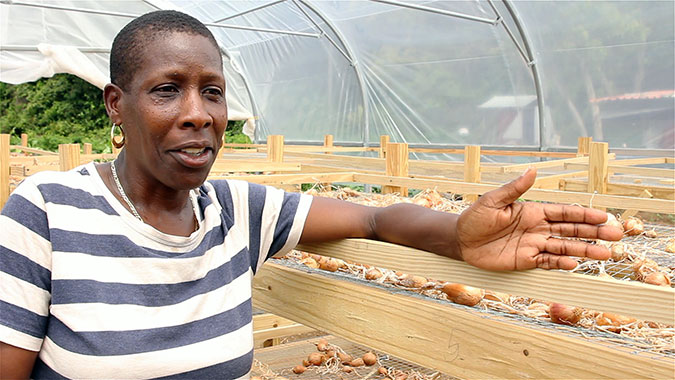 “Livelihoods were lost! The income we make from the farm, that is how the women feed their families and send their children to school. A lot of people had to start again. I had to start all over,” said Jennifer Pascal, Vice-President of the North-East Agriculture Women’s Movement.

In September 2017, Category 5 Hurricane Maria tore through the island nation of Dominica, leaving extensive damage in its wake. UN Women Programme Specialist, Isiuwa Iyahen visited the island shortly after, to assess the impact of the Hurricane on smallholder women farmers in the western and southern districts of the island.

“The damage to these women’s farms was catastrophic with 76 per cent of them reporting major losses, with their crops wiped out, equipment, tools and infrastructure destroyed,” said Iyahen. 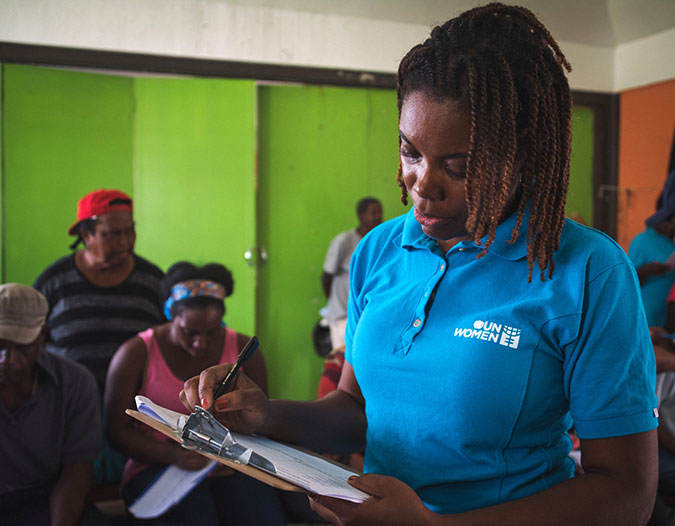 “Honestly, you couldn’t prepare anything. We couldn’t protect our crops… We couldn’t protect the things inside our home, much less outside. Remember they said we will get a direct hit, yes, but [that hit] came three hours before [expected landfall]. It happened so fast and it developed so fast,” said a member from the Morne Prosper Women’s Group, a collective of women farmers.

The national Post Disaster Needs Assessment highlighted that the agricultural sector in Dominica is largely composed of small family farms and subsistence production from small plots locally referred as “kitchen gardens”. More than half (57 per cent) of the farmers interviewed owned farms of five acres or less in size, while 22 per cent were farming on plots that were between five to 10 acres. It’s also the second largest employer (after the services sector) in the country, providing employment for 17 per cent (11,900) of the population.

After the hurricane, some women could not return to their farms immediately because of the damage to their homes. "The women had to make a choice between the farm and their family home. Some women (five months on) have just started to get back on to their farms,” said Pascal, adding, “my greenhouses are still flat and I don’t know if I will be able to build new ones or make what I have stand again. It has become very costly labour-wise and because not much money is coming in... we are unable to pay labourers, that has impeded what I can do.”

The main crop from her 2-acre farm was seasoning peppers, but they are all gone now. “I had just started to put the onion seedlings in October and I couldn’t find any of the seedlings that I had planted. Most of my fruit trees are flat… My shed on the farm went too and all the water storage tanks fell,” she elaborated.

“I had irrigation pipes… Half of them went down the river, because I am right on the river bank. Some broke, some tore, so it is going to take time to put that back together,” she continued. Only the avocado trees in Pascal’s farm has survived complete destruction and have started flowering.

Many women farmers in the country were already at a disadvantage in the agricultural sector since prices for their crops were set for them by the traders. Just before Hurricane Maria struck, UN Women was about to start providing support to the north-east women’s farmers groups in Dominica to strengthen their skills in price and contract negotiation. The project also aimed to help women farmers identify potential for value addition of their products and new market opportunities, including by linking them with the eco-tourism sector.

Today, the need for support is greater than ever, especially for women farmers who are bearing the brunt of the disaster and are on the frontlines of managing its effect. 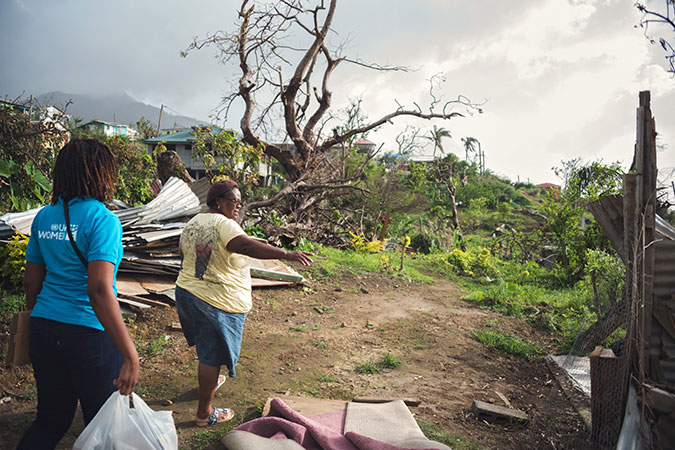 This came through clearly in UN Women’s assessment of the situation. What the women of Dominica want is assistance to get back on their feet and work, not handouts. Seeds, equipment and access to financial assistance are the immediate priorities.

“We are asking for short crop seeds to get back on our feet faster rather than what could take longer months—tomatoes, peas, carrots, cabbage and lettuce. [With these], six weeks after planting we would get a crop,” explained Jennifer Pascal. Women from the Northeast Women Farmers Group added that help from the Ministry of Agriculture to recover high-value crops like cocoa, avocado, mango and other citrus fruits would also be critical.

Post-Hurricane Maria, UN Women supporting women farmers’ groups to get labour and equipment to bring their farms back into production. The Post Disaster Needs Assessment conducted by UN Women will not only inform its own programme, but also other development actors, such as the World Bank and the national government in their efforts to rebuild Dominica.

While electricity has not returned to the area, everyone has running water in their homes again. “We are keeping the faith, the women are upbeat,” concluded Pascal, with a smile.

Related News
15/08/2018
Crisis update: Restoring dignity and livelihoods after storms in the Caribbean
18/05/2017
Editorial spotlight: What does gender have to do with reducing and addressing disaster risk?
12/10/2016
UN Women provides immediate support to women in Grande Anse after Hurricane Matthew
12/10/2016
Preparing for disasters, rebuilding in the aftermath
23/06/2022
Op-ed: End the disconnect
END_OF_DOCUMENT_TOKEN_TO_BE_REPLACED