Rural Algerian women take charge of their own lives, empower others

In remote and rural Algerian communities, poverty among women is high. For vulnerable groups, such as widows, it’s even higher. A project funded by UN Women Fund for Gender Equality has revealed the unique challenges faced by women in these areas and given them the means to earn incomes, take charge of their own lives and inspire other women in their communities. 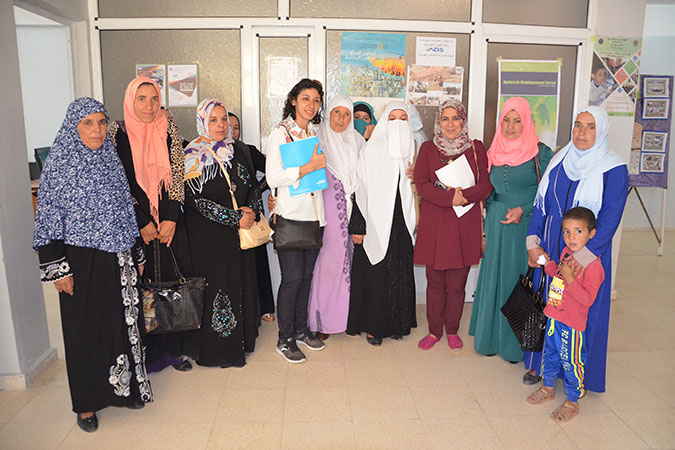 Houria Belouahri (third from the right) after a meeting with women from a cooperative created in the Bordj Bou Arreridj Province, Algeria. Photo courtesy of El Ghaith Association

When Fatiha Routane’s husband passed away, her eldest child was six years old. The 39-year-old widow living in Bordj Bou Arreridj Province, a remote rural area in the north-east part of Algeria, had to defy all stereotypes to find income and raise four children on her own.

In this part of the world, widowed women who work outside their homes are frowned upon. Even as Routane tried to find work, her options were limited to subsistence farming and pottery, which generated barely enough income to cover the basic needs of the family.

Her story is one of many, as revealed by the first socio-economic study of women across 24 municipalities of the the Bordj Bou Arreridj region in 2015. The study was conducted by the organization El Ghaith, with the support of UN Women’s Fund for Gender Equality, and showed high levels of poverty among women, especially widows, divorcees and those who headed households, and lack of access to education, health and employment opportunities.

“These women are among the most marginalized in the country, and often difficult to reach through government programmes. When we talk about ‘leaving no one behind’, these are the types of communities that we need to target,” says Rana El-Houjeiri, UN Women Fund for Gender Equality Portfolio Manager for the Arab States.

Since the study was published and disseminated, more authorities are aware of the challenges faced by women in these communities and are collaborating with El Ghaith and other local organizations to provide assistance through “proximity centres”—mobile outreach units set up by the Government.

“I first heard about El Ghaith’s initiative through the National Solidarity Ministry’s proximity centre in El M’Hir and I immediately decided to take part in [the project]. They made us aware of our rights”, recalls Routane.

She was among more than 450 women from the five poorest municipalities to participate in the project and learned about her socio-economic rights, existing public services and how to access them, in addition to learning new income-generating skills, such as beekeeping, breeding and keeping sheep, goat and rabbits.

El Ghaith also operates the project with a unique principle, “those who receive, give back”. The project distributes three units of livestock or beehives to each beneficiary, who are then expected to redistribute two units to other women after one year. Since 2015, the project has not only expanded women’s incomes, but given them the tools to become active community members.

“I received two goats and now I have eight”, says Routane. “I used to spend a lot of time with the neighbours, or in front of the television. Now I am a productive member of the society and help other women.” 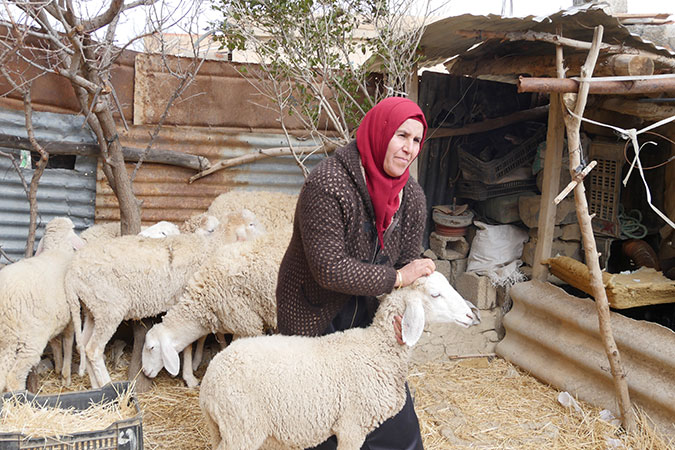 Fatiha Routane takes pride in looking after the eight goats she raised, thanks to the support of El Ghaith. Photo courtesy of El Ghaith Association

El Ghaith has also trained women farmers in developing and branding higher-value products and installed three production units where women can process cheese, honey and wool. In the course of the next two years, El Ghaith plans to transfer the management of the production units to women-led cooperatives, with direct access to markets.

Houria Belouahri is the head of the project in El Ghaith. A biologist and an agronomist by training, this is her dream project. Initially, the project encountered some challenges. In this highly conservative and remote area, women were not expected to leave their homes to attend meetings and training sessions. Therefore, the organization facilitated community discussions with male family members. Once the men understood that the project would bring additional income to their households, they were more ameanable to the idea of women stepping outside their homes. As the initiative started showing positive results, the word of its success spread quickly, positioning women as active players in their communities.

Belouahri sees how the project has empowered women much beyond the additional income. “Before, they were shy and insecure, they did not go outside their homes. They feared their parents and families. I now see independent women who feel proud of being able to manage something of their own, by themselves,” she explains.

The project has now brought on board the Ministry of National Solidarity as a partner and the Ministry intends to replicate the initiative in other areas. The Fund for Gender Equality also organized in 2017 an international exchange between Algerian and Lebanese women entrepreneurs to improve marketing, food safety techniques and product standards.

Today, Fatiha Routane is planning to finish the construction of her house with the money she has earned, and do much more: “My advice to other women like me would be to take good care of our assets. We need to work hard to become independent, and participate in the development of our families, our region, and, why not—our country!”

Related News
12/09/2019
From Tanzania to Algeria, rural women are taking charge of their lives and livelihoods
02/08/2021
Empowering Libyan women to make a living and put food on the table
06/07/2021
Press release: Princess Sabeeka Bint Ibrahim Al Khalifa Global Award for Women’s Empowerment launched on the sidelines of the Generation Equality Forum
25/04/2021
From where I stand: “I deserve to live, and work and do whatever is needed to make my daughter happy.”
22/12/2020
Amidst multiple crises, a Syrian in Beirut uses new skills to make a living
END_OF_DOCUMENT_TOKEN_TO_BE_REPLACED