In the words of Jaha Dukureh: “We are at a tipping point in the movement to end FGM” 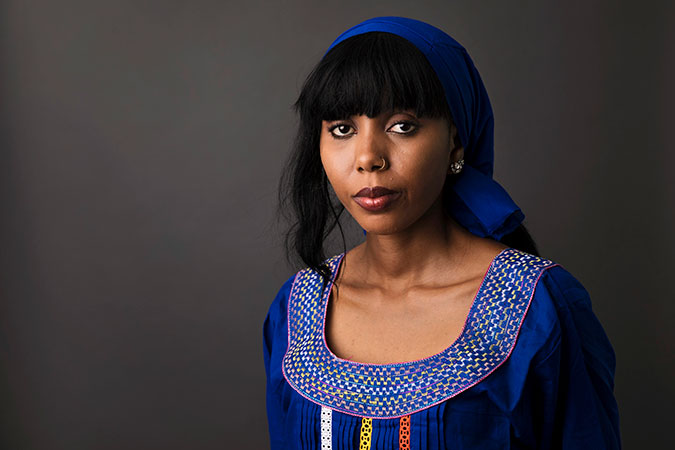 Jaha Dukureh, UN Women Regional Goodwill Ambassador for Africa, is an outspoken activist leading the movement to end Female Genital Mutilation (FGM) and child marriage. FGM is a cultural practice that involves cutting off parts of female genitalia, condemning girls and women to a lifetime of health consequences. In many parts of the world, it’s also a prelude to child marriage. Ms. Dukureh started speaking out against child marriage when she was barely 10, when she snuck out to the local television station to talk about how girls in her community should not be forced to marry. When asked what her biggest accomplishment is, she says, it’s yet to come—the day when she succeeds in drastically reducing the number of girls and women experiencing FGM.

My story starts when I was one week old, when I went through FGM. I have no memory of going through the process, and I didn’t know until the age of 15, when I was forced to get married.

I came to New York City on Christmas Day when I was 15 years old to marry a man whom I had never met. I think getting married at a young age is the most difficult thing any girl can ever go through. When you force a girl to marry, you've given a man a right to rape her every single day.

I managed to leave my husband after two months and went to live with my uncle and aunt in Bronx. I wanted to go back to school. But in my tradition, I was no longer considered a girl because I was married, and I couldn’t convince my aunt to enroll me in school. I went to every school that I knew in the Bronx, asking them to register me. But they wouldn’t, because they couldn’t register a child without a legal guardian. Eventually a school took me in... I worked harder than I’ve ever done in my life and graduated.

After finishing high school, I moved to Atlanta and remarried. It wasn’t until I was pregnant with my daughter, that I started to speak out against FGM. I didn’t want my daughter to ever have to go through what I had. I also knew there were millions of girls out there, just like me and my daughter, and no one was speaking for them. If it wasn’t going to me, who else would do that?

I started to speak out, I started to shout… I started, with a blog, where I shared my own experience. Soon after that, I started a support group for other women in my home in Atlanta. By 2014, I had registered my organization and started my change.org petition, asking President Obama to investigate the prevalence of FGM in the United States. Subsequently, the United States Institute of Peace convened the Summit to End FGM for the first time in 2016.

I think there are still a lot of misconceptions about FGM, like it's practiced by ignorant Africans and people over there who are uneducated, uncivilized. FGM is happening in Africa, but also in the Middle East, Southeast Asia, and even in places like Colombia and the United States of America and the United Kingdom! FGM is not about religion. It's not about class. It's not about education. I've seen some of the most educated people practice FGM because they believe it's their culture.

In fact, the biggest challenge standing in our way is this idea that FGM is a religious practice. It’s hard to change something that people believe is their religious obligation. We need religious leaders to come out boldly and say that FGM has nothing to do with religion. In Gambia, we organized the first religious leaders’ training in 2015. Before the training, I remember how divided the room was… many of the religious leaders who came from Gambia, Senegal and Mauritania supported FGM. By the end of the training, they issued a fatwa against FGM.

We also need to get resources to the communities directly to do this work; cut out the middle man and trust that women and their communities are more than capable of bringing solutions that are actually going to help us end FGM. We can't import solutions into communities and expect change. Every community is different! The reason why they practise FGM is different!

Right now, we are at a tipping point in the movement to end FGM. Not only do we have survivors who are taking the lead in fighting against FGM, we also have the political will across the African continent, and UN agencies that are doing more than ever before. Because we have created a movement where women are leading the change, I think we have a chance to make 2030 arrive early.”

You can listen to Jaha’s story and other stories on gender equality on your Amazon Alexa device. Enable UN Women’s new Flash Briefing Skill on your Alexa app, or by clicking on this link: https://www.amazon.com/gp/product/B07N2HDJY2.