In the words of Chi Yvonne Leina: How I stopped grandma from ironing my budding breasts 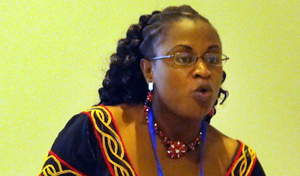 Chi Yvonne Leina speaks about “Problems faced by Female Journalists in Africa” during the West African Conference for journalists organized by the Media Project in June 2011. Photo credit: Yemi Kosoko

Cameroonian journalist and women’s rights advocate Chi Yvonne Leina is the founder and coordinator of Gender Danger, a grassroots women`s organization that is fighting to end the practice of breast ironing in Cameroon. She attended the Commission on the Status of Women in New York in March as a World Pulse correspondent, to raise awareness and create partnerships to help her NGO expand its work to prevent breast ironing in Cameroon. She is also starting a media centre to train women and girls to use digital media to educate, raise awareness and transform society. We bring you her first-hand account of the practice of breast ironing as part of UN Women’s “In the Words of…” series.

What goes on in the mind of an 11-year-old girl who is locked up in a kitchen daily by her own mother, who uses a fire-hot stone to burn and press her sprouting breasts?

Pain and perpetual fear become her daily companions. She is forced to believe that it is a shameful thing for her breasts to develop. Imagine her at a later stage in life not being able to breastfeed her baby because the milk ducts have been destroyed by this practice or unable to enjoy sex because her sensual nerves were killed by her mother in the name of protection.

This is a daily reality for over 4 million girls in Cameroon,[i] where mothers have resorted to destroying early signs of womanhood in their daughters for fear of attracting sexual predators.

With long black hair, a slender body, and ebony skin, my cousin Aline’s beauty was obvious to every casual observer. She was pretty and intelligent. She had just turned twelve and grandma kept an eye on her developing breasts and beauty. She kept saying Aline would soon start attracting men and get pregnant before getting married if nothing is done to those breasts.

One day, as I approached grandma’ s hut, there was unusual silence, but for the chirping of birds and the flowing sound of a nearby river. Grandma’s hut was locked. I heard another sound: it was Aline, groaning in pain! I peeped through a small hole on the wall of the hut. There was grandma, pressing Aline’s breast with her grinding stone. God! Why was she doing this? I got to understand why my beautiful cousin had changed completely; because grandma was “fixing” her!

Aline was always unhappy and moved with her arms covering her breasts. Her once glowing beauty was gradually fading away. She refused schooling later that year and eventually got pregnant a few years after.

A few months after that incident, grandma called me and asked me to take off my shirt for her to fix me. I refused and threatened to alert the neighbours and tell my mom if she dared. I was not ready for anyone to burn and press my budding breasts in the name of “fixing” me. Out of fear, grandma gave up. She anxiously watched me as I grew, expecting the worst to happen at any time.

I learnt from that moment that it is important to speak out in the face of adversity. Unfortunately, many women and girls in my community do not have the opportunity to do so.

According to a Survey by the United Nations Population Fund and German Development Cooperation, one in four girls in Cameroon have had their breasts brutally pressed or pounded with hot objects, usually by their mothers, to prevent them from developing early.

Practiced in all regions of Cameroon, breast ironing is done to prevent girls from attracting men at an early age. This extremely painful act has health and psychological consequences which contribute to the high rate of school dropout amongst girls in Cameroon.

According to health experts and personal experiences I have witnessed over the years, cysts, Mastitis, complete disappearance of one or both breasts, over-enlargement of breast tissue, cancer and depression are some of the known harmful effects of breast ironing.

From that day when I narrowly escaped breast ironing, I laid it in my heart that I would be a voice for other girls who could not speak for themselves. That made me determined to become a journalist.

At university, I studied Journalism and minored in Women and Gender studies. After five years of working as a journalist in Cameroon, I still did not succeed in being a voice for the voiceless women as much as I wanted to until I joined World Pulse in 2010. When I broke the story about breast ironing on World Pulse, it attracted huge media attention from all over the world.

I was happy to have broken the silence, but in my heart I longed for a deeper change. Early in 2012, I brought together a crowd, pulling women leaders in the Northwest region of Cameroon to form a group called Gender Danger, which is now working to eradicate this practice.

Breast ironing is usually a well-kept secret between girls and their mothers. Gender Danger is out to break this silence and expose the dangers of the practice in a bid to put an end to it. We are reaching out to women in churches, cultural women’s groups, hair dressing salons — wherever women gather — with the message of the dangers of breast ironing.

So far we have reached over 15,000 women in the Northwest region of Cameroon with the sensitization message. Gender Danger is now working in partnership with the Northwest Delegation of the Ministry of Women’s Empowerment and the Family.

During the campaigns, victims and perpetrators come out and share their personal stories. The discussion are usually very emotional sessions during which women cry and heal together, promising not to do that to that to their daughters again and to spread the word further.

We are now planning to extend this campaign to the other nine regions of Cameroon and to include screening and treatment of breast-related diseases, especially in rural areas.

I would like to create more partnerships to expand this work further.

[i] Survey by the German Development Cooperation (GTZ) and the United Nation`s Population Fund. 2006 http://www.friendsofunfpa.org/netcommunity/page.aspx?pid=342

Related News
14/11/2017
Rural women explore new solutions to counter customs and poverty driving FGM crisis
22/04/2015
In the words of Edith Chukwu: I want to see a world free of violence against women and girls
05/02/2013
In Tanzania, a caravan of activists visits five regions over eight days on a journey to end violence against women
27/02/2018
In the words of Jaha Dukureh: “We are at a tipping point in the movement to end FGM”
15/06/2015
Civil society dialogue heeds strong commitment to ending child marriage in Africa
END_OF_DOCUMENT_TOKEN_TO_BE_REPLACED