In the words of Kadire Tahiraj: “Sexual violence during the war remains an unpunished crime in Kosovo" 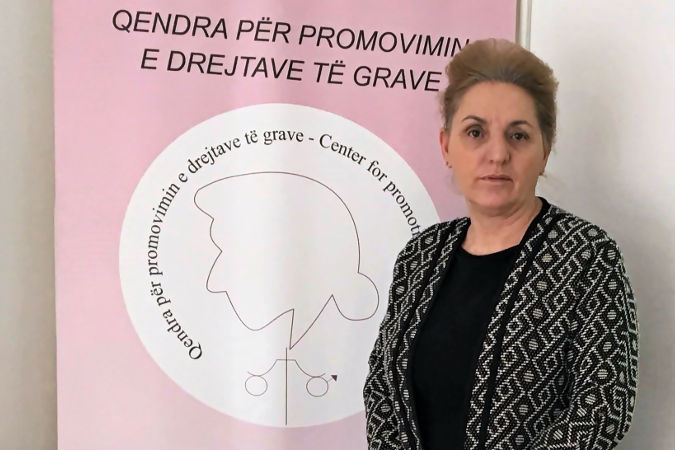 Kadire Tahiraj is the founder and director of Centre for Promotion of Women’s Rights in Drenas, central Kosovo[1], which has been advocating for the rights of survivors of sexual violence during the war in 1998-1999. The centre provides support and services to survivors who still face many challenges in the face of post-conflict transformation. Tahiraj’s organization was a partner of UN Women in implementing a grants scheme which provided financial and psychosocial support to survivors. The project, Gender Sensitive Transitional Justice, was implemented in partnership with Kosovo Women’s Network, and funded by the EU.

I have been working with survivors of war-time sexual violence since 2003. It all started with a meeting at the waiting room of a health centre, where a survivor told me about her case. She said that there were many other women like her, but they had no courage to report their cases.

I started meeting with some of these women at the health centre at least once a month. They shared the painful experience and suffering they endured during the war. In the second month, there were five women and every other month, the number of women joining increased gradually. After a few months, I asked the municipality for support and the mayor provided us with an office.

Even though the electricity has been cut off in that building for years, having an office was a major achievement. To inform survivors about our support, I needed a phone, and to be able to buy it, I pursued handicrafts for a full month to save money.

In 2013, I got the courage to establish the Centre for the Promotion of Women’s Rights with support from local institutions, women's organizations and international donors. But we received mixed reaction from the community and the officials. It was claimed that our organization wanted to embarrass the community, and they called it the “organization of shame”. But our only goal was to support women, tell the truth and uncover crimes. These women wanted to punish the perpetrators, but even after 19 years, sexual violence during the war remains an unpunished crime in Kosovo.

It has been very difficult to identify survivors as they have been suffering from stigma and prejudice from their families and the community. The rapes were committed in front of family members. Many men divorced their wives who are survivors. Girls who have been raped are now mostly single and unemployed. Women and girls from age 12 to 60 have been raped.

When I met these women, they all said that their life was revolving around their mother’s house, husband’s house and the doctor. Despite all the challenges, the fact that these women trust me makes me feel good.

Survivors also faced unfavorable economic conditions. They couldn’t seek economic support from institutions because they didn’t have any confidentiality measures and survivors had to provide their identity. They also felt insecure about seeking support because they felt that everyone in the community knows they were sexually abused. During the war, there were cases of rape in groups, where women were taken out of their houses, naked, which has made them believe that when they leave their homes now, everyone on the street knows what has happened to them.

Institutions should commit to improving the status of women survivors and the society should end the prejudice against them. Survivors should never be called “victims” as this term victimizes them even more.

As of this February, survivors can apply for a monthly pension from the state, but this carries the risk of leaving them isolated even more. Survivors’ employment and economic empowerment should be prioritized.

For 18 years, survivors have received various treatments, psychological services, and medical examinations but their economic empowerment is of utmost importance. With UN Women grants, women have managed to feed their children and send them to school. Some survivors now say they have a reason to wake up every morning. As a result of this project, they have freedom of movement, they go out and sell their products. Now, for the first time in their lives, they go to town with their children on holidays and buy them clothes. For many of them, this was the first time they had a wallet.

I quote the words of one of the beneficiaries: ‘We have been like caged birds, and around us we had walls. But these grants have been a key for us, opening the doors and giving us wings to fly.’"

[1] References to Kosovo shall be understood to be in the context of Security Council Resolution 1244 (1999).