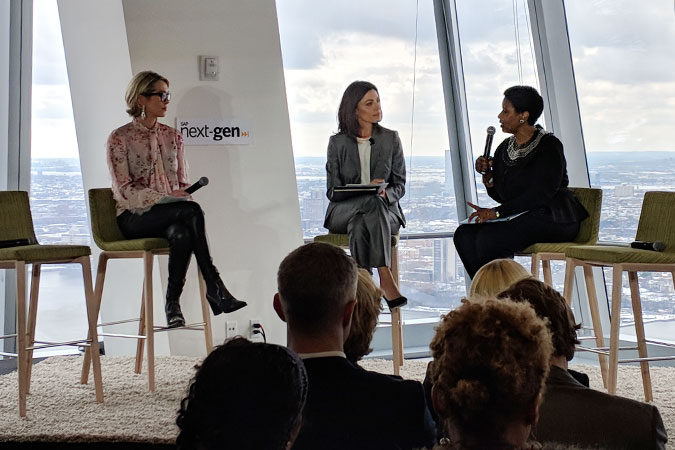 Using their platforms and networks, the Champions will support the flagship innovation programmes of the Global Innovation Coalition for Change (GICC) throughout 2018 and 2019. 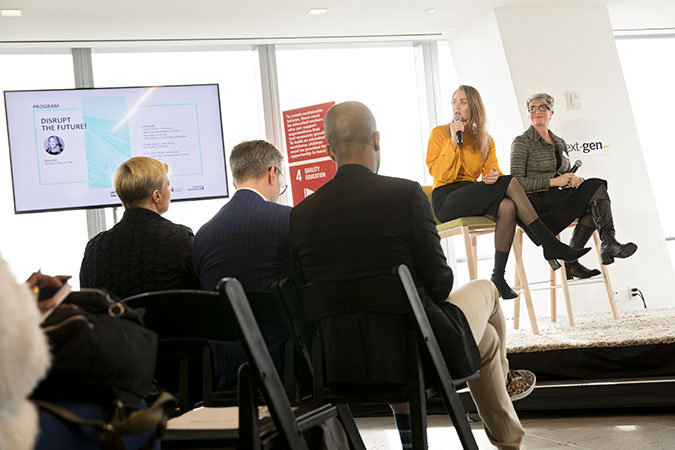 The GICC is a dynamic partnership between UN Women and key representatives from the private sector, academic and non-profit institutions focused on ensuring that women and girls fully benefit from technological innovation in our increasingly digitally-driven world.

The UN Women Champions for Innovation will support the work of the GICC through the following activities:

Through the engagement of the Champions for Innovation, UN Women expects to further help women and girls to design, shape and benefit from the technological transformations and innovations changing our world.

The Champions for Innovation

Rachel Roy is the founder and creative director of her eponymous brand and a tireless activist for using your voice to encourage change and to design the life you wish to live. Created in 2004, Rachel has built her ready-to-wear and accessories business into a globally recognized brand with product categories including contemporary, curvy, outerwear, jewelry and swim.

Rachel is a member of the Council of Fashion Designers of America. She founded Kindness Is Always Fashionable, an entrepreneurial philanthropic platform to help women artisans around the world create sustainable income for their families and communities. Rachel nurtures young design talent globally through her work with the Who’s Next/Vogue Mexico, WoolMark Prize and CFDA incubator programs.

She is an advisor to World of Children a national non-profit organization that serves underprivileged children. A sought-after speaker on entrepreneurship and philanthropy, she has shared her story at forums ranging from the White House to the Fortune Most Powerful Women conference. Rachel has been recognized by the Accessories Council with an ACE AWARD for best brand launch as well as Mattel’s 10 Women to Watch and numerous best dressed honors including Vanity Fair’s Best Dressed List. Rachel has also been recognized for her innovative brand and film work by AdWeek Media and the LaJolla Fashion Film Festival.

Rachel has been a contributing columnist to Huffington Post and InStyle magazine. Her work has been featured on CNN, The Today Show, The Wall Street Journal, The New York Times, The Washington Post, USA Today, and numerous other publications. In 2015 Rachel wrote, Design Your Life.

Sarah Michelle Gellar is a Golden Globe nominee and Emmy winning actor. In October 2015, Gellar stepped into a new role as entrepreneur, co-founding Foodstirs along with Galit Laibow, and Greg Fleishman.

Foodstirs was created with the sole purpose of helping families create meaningful experiences through the modernization of home baking. Foodstirs organic and GMO-free baking mixes and kits are made with the highest-quality, clean and ethically-sourced ingredients for seriously delicious baked goods that never sacrifice product integrity for taste.

Gellar is also an author, she released her first book last year, Stirring Up Fun with Food, filled with over 100 recipes and food-crafting ideas to be creative in the kitchen. Off screen, Gellar lends her time and support to child and hunger organizations as an advocate and activist. She works closely with No Kid Hungry and Good+ Foundation, as well as the non-profit organization CARE.

Additionally, Wade is a senior D&I consultant at the global think tank and leadership-consulting firm YSC. A champion for UN Women, as well as a member of the National Fair Housing Alliance 50th Anniversary committee, Wade is a founding member of VICE’s Diversity and Inclusion Advisory board with Gloria Steinem, as well as on the advisory board of Sparks and Honey and GMHC. Wade gave a TEDx Talk, The Mask of Masculinity, where he reflects on his upbringing and the impact of toxic masculinity on male identity.

He has partnered with Planned Parenthood, the Ms. Foundation and HuffPost Women, separately, launching initiatives and PSA’s to define, establish and achieve the political, social and economic equality for women and men. Understanding the importance of engaging men, Wade built a Men’s Gender Equality Leadership programme that he’s launching with the United Nations and other organizations. A former national surrogate for President Obama, Wade is also a former professor at NYU and Rutgers and received an honorary Doctor of Public Service from Northeastern University.

Nina Ansary is a bestselling author, historian, and leading authority on women's rights in Iran. Her book Jewels of Allah: The Untold Story of Women in Iran received international attention and has garnered multiple awards, including the 2016 International Book Award in ''Women's Issues'' category.

She is the recipient of the 2018 Trailblazer Award from Barnard College, Columbia University. She has also been recognized as one of "14 Privileged Women to Change the World" by Marie Claire, been featured in Angeleno Magazine's ''Living Legacies of 2016'' and selected as one of ''Five Iranian Visionaries You Need to Know'' and ''6 Women Who Build Bridges Not Walls'' by The New York Times.

Ansary has appeared on Fox News, Larry King, The BBC and CBS Radio and been featured in a variety of top publications, including CNN.com, The Los Angeles Times, The UK Daily Telegraph, Teen Vogue and the Yale Journal of International Affairs. She regularly contributes to the Daily Beast and to Women in the World in association with The New York Times.

Ansary is a Visiting Fellow at the London School of Economics Centre for Women, Peace and Security and regularly presents her work at top universities, including Columbia, Oxford, Cambridge, New York and Harvard, as well as the Carnegie Endowment for International Peace in Washington D.C., the UN Social Good Summit, and worldwide conferences in Dublin, Milan and London. She also frequently moderates panels and discussions, most recently at the UN Women's Innovation, Technology and Entrepreneurship Industry Forum 2017. Ansary holds an MA in Middle Eastern Studies and a PhD in History from Columbia University. She serves on Columbia University's Global Leadership Council, the Board of Trustees of Barnard College, the Iranian American Women's Foundation (IAWF), and Persia Educational Foundation.

Zoe Saldana is the epitome of a true star in Hollywood, and has built her reputation as a versatile and respected actress by choosing roles that she feels passionately about. In 2018 Saldana launched the digital platform, BESE to bring greater diversity to Hollywood and 'share the real stories of Latin Americans.

When not in production, Saldana engages in meaningful philanthropic work involving children’s development, well-being and confidence building. Saldana has been very vocal in her involvement with Brave Beginnings. The organization focuses on bringing essential life-saving equipment and services to seriously ill children and their families. Saldana is also the Global Ambassador for Shot@Life. Shot@Life aims to ensure that children around the world have access to life-saving vaccines. Through education, advocacy and fundraising, they strive to decrease vaccine-preventable childhood deaths and give every child a shot at a healthy life no matter where they live. It is a campaign of the United Nations Foundation, which builds public-private partnerships to address the world’s most pressing problems, and broadens support for the United Nations through advocacy and public outreach.

Additionally, Saldana also lends her support to The Step-Up Network. Each year the organization holds their Annual Inspiration Awards Gala in which Saldana was honoured in 2014. Saldana has also taken part in The Haiti Relief Inc which works tirelessly to provide disaster relief to Haiti after the devastating earthquake in 2010. Additionally, Saldana has participated development efforts with FINCA – an organization designed to alleviate poverty through lasting solutions to help build assets, create jobs and raise the standard of living.

Joy Mangano is one of the most-successful and celebrated product inventors of her time. As President of Ingenious Designs LLC, the company she founded in the back of an auto-body shop, she has created and sold nearly $3 billion of product to women across America.  She is the author of inspirational WSJ Best Seller memoir “INVENTING JOY: DARE TO BUILD A BRAVE & CREATIVE LIFE”, and her life was the subject of the 20th Century Fox feature film “JOY”, starring Jennifer Lawrence in an Oscar-nominated performance as Joy.  She was also the subject of the digital series “Inventing Joy”, produced by CBS.

In 1991, Joy invented and launched the first-ever self-wringing Miracle Mop, and has gone on to invent and launch hundreds of successful products across virtually every category, most notably Huggable Hangers, My Little Steamer, Forever Fragrant, and luggage with her revolutionary SpinBall Wheel System. In addition, Joy’s products can be found in premier retailers such as Macy’s, Target, Bed Bath & Beyond, Meijer, Lowe’s and The Container Store.

Joy is also the founding director of the Joy Mangano Foundation, and has overcome incredible odds to experience great success. She was named one of Fast Company’s “Most Creative People” and her products have been profiled on Good Morning America, 20/20, the TODAY Show, The View, and numerous consumer publications including Good Housekeeping, where Joy’s products have regularly obtained the outlet’s award seal.

Related News
14/11/2022
Speech: Focus on gender equality as central to climate action with concrete solutions
08/02/2022
From where I stand: "Gender equality is essential for us to be able to mitigate climate change."
21/04/2021
Inspiring girls to know: Four stories to celebrate girls in ICT
09/02/2021
Women in science who are making a difference during the pandemic
09/02/2021
I am Generation Equality: Gitanjali Rao, young scientist and activist
END_OF_DOCUMENT_TOKEN_TO_BE_REPLACED