Speech: Winning the fight for equality with the whole of society

Remarks by Under-Secretary-General of the United Nations and Executive Director of UN Women, Phumzile Mlambo-Ngcuka, at the Tribeca Film Festival’s Tribeca Talks – Times up event in New York City

We are here to celebrate your art as well as to reflect on the frontiers that you are pushing every day. You have made a difference in the lives of many women around the world by speaking up and helping to connect the dots, because for hundreds of years women have lived with violence and impunity in every corner of the globe.

Thank you for the power of your craft, for the power of the arts. In my country of South Africa, the arts told the story of apartheid and changed minds of people around the world. Many of you might remember Miriam Makeba who sang "Qongqothwane", and who through her music made people listen about the oppression in South Africa. 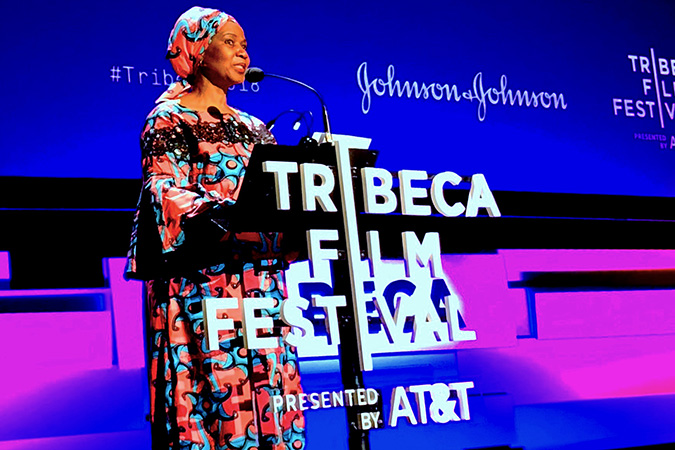 What you are doing here with #Metoo and Times Up has communicated two very important messages for those of us who work around the world: firstly, the importance of sisterhood and solidarity. Because #Metoo is about saying, “I am your sister, it happened to me and we can go through this together”. And look at what you’ve done! With Times up you have said “hell no, this is not normal.” This is not normal. There have got to be consequences for bad behaviour. It does not matter that you are powerful. It does not matter that you have authority over people. There are consequences. These are two very important actions that are part and parcel of the struggles of women in every corner of the world.

UN Women has one of the largest funds on ending violence against women in the world. We reach out to women in 132 countries. One thing that we have learned from these women, as well as all of the partners in the countries that we work with, is the importance of women having someone to talk to.

We know that the number of women that live with violence in their everyday life has reached an epidemic proportion. It is a public health crisis. It is a violation of rights of a proportion that is not experienced in any other sector. It is said that it is the most tolerated form of oppression and rights violation that exists. Women cannot get justice in many countries from law enforcement authorities. Women are silenced by their own families. Women are silenced by their own employers who are more worried about legal liabilities than about the pain that women live with.

We have calculated from the work that we do in many parts of the world that there are a billion women who live with this pain. A billion walking wounded.

We know this because the work that we do in partnership with the World Health Organization helps us to collect data from health providers. Because when women live with pain and abuse they are not going to go to their relatives as their first port of call, not even to law enforcement. When they are in real pain they will seek someone who is a medical professional and a health provider. So we know from dentists, from eye specialists, from orthopedic surgeons, from mental health specialists, from emergency rooms and from morgues that women are living with pain. And this is how we add up the figures. This cannot go on.

What Times Up has been able to do is to help the many other women in different parts of the world whose voices have been muzzled, whose struggles are being made invisible. You have been able to use your craft to shine a light, so that even those who are struggling where there is no visibility are made visible. In that way you have done what Miriam Makeba did when she made apartheid and the struggles of the people of South Africa visible. And we thank you for that step.

Women all over the world have also been in solidarity with men – a few men. But let us say now that we see an increasing number of men who are willing to come forward and even say “I am a feminist”. We would never have thought that, even five years ago. So, we are getting somewhere.

We have a movement at UN Women called HeForShe, a movement of men who stand for gender equality and who are not afraid to stand up. But we need more men to come up front. Because when good men do not take a step forward, do not act, that is conspiracy against women. We therefore are urging men to do their part and to come forward.

We want to highlight the fact that harassment at the workplace is the responsibility of regulators, of ministers of employment, of shareholders, of HR, of customers, and of investors. If there is a fire hazard at a workplace, you do not leave that to the workers to sort out. It is the responsibility of everybody who benefits from the work being done in that place. So, perpetrators must not only be the problem of those who are being offended by the perpetrators. It is a social responsibility. And Times Up says that, from now onwards, we all take responsibility, we all make a change. It must never be like this again. The next generation must not experience this.

I agree with my sisters that gender inequality is complex. Unequal pay is a violation that is experienced by women all over the word, demonstrating how women’s work is not valued. Women are disproportionally represented in low-paying jobs with no minimum wage in the “sticky floors”, with little possibility to rise up through the ranks. It’s hard work for those who rise up, climb the ladder and try to smash the glass ceiling – and sometimes it’s even a steel ceiling. And those who manage to break the glass ceiling find that there are other women right at the floor who have to sweep up the glass. There are men who should just remove those ceilings so there is no shattering of anything. The door should just be open.

We are calling therefore for the brotherhood of sisterhood. Everyone benefits in a gender equal society. The fact that in 2018 there is not a single country that we as the United Nations can say is a country that has attained gender equality frustrates me very much.

Some critical barriers to gender equality exist in all countries. Violence is one. Unequal pay and the limited participation of women in the economy where it matters most, therefore making poverty disproportionally a problem for women, is another. There is not a country in the world where women are significantly represented in decision-making roles where there is power and money at stake. The exploitation of girls through trafficking, sex slavery and harmful practices including child marriage and female genital mutilation is a problem that we see around the world, as well as the over-representation of women in unpaid care work, where they look after children, old people, disabled people and people in communities and families without pay. There are some of the key barriers that keep women down in our society. The changes that we are talking about must remove all of these, all at the same time, for all women, in every corner of the world so that the 21st century will be different.

In the 19th century, people fought and defeated slavery. The slaves did not fight just by themselves, there was solidarity. In the 20th century, it was a fight against racism and colonialism. It was not only the people who were affected by colonialism who fought, it was the whole of society. The 21st century has got to be where we fight and win against sexism, against gender-based violence, against all forms of oppression against women. This is why we are here.

Time is Up in the 21st century – and not the whole century, but very soon. We have to end this and we have to end it together. Thank you so much.

Related News
18/09/2018
Statement: Final decision on the sexual misconduct investigation at UN Women
16/03/2018
Coverage: “#MeToo, Now What?”
20/11/2015
Statement by UN Women Executive Director Phumzile Mlambo-Ngcuka for International Day for the Elimination of Violence against Women
17/11/2014
Open letter to the media: Orange your news and newsrooms to raise awareness of violence against women
02/12/2013
#AskPhumzile Twitter chat with Executive Director Phumzile Mlambo-Ngcuka on ending violence against women and girls
END_OF_DOCUMENT_TOKEN_TO_BE_REPLACED