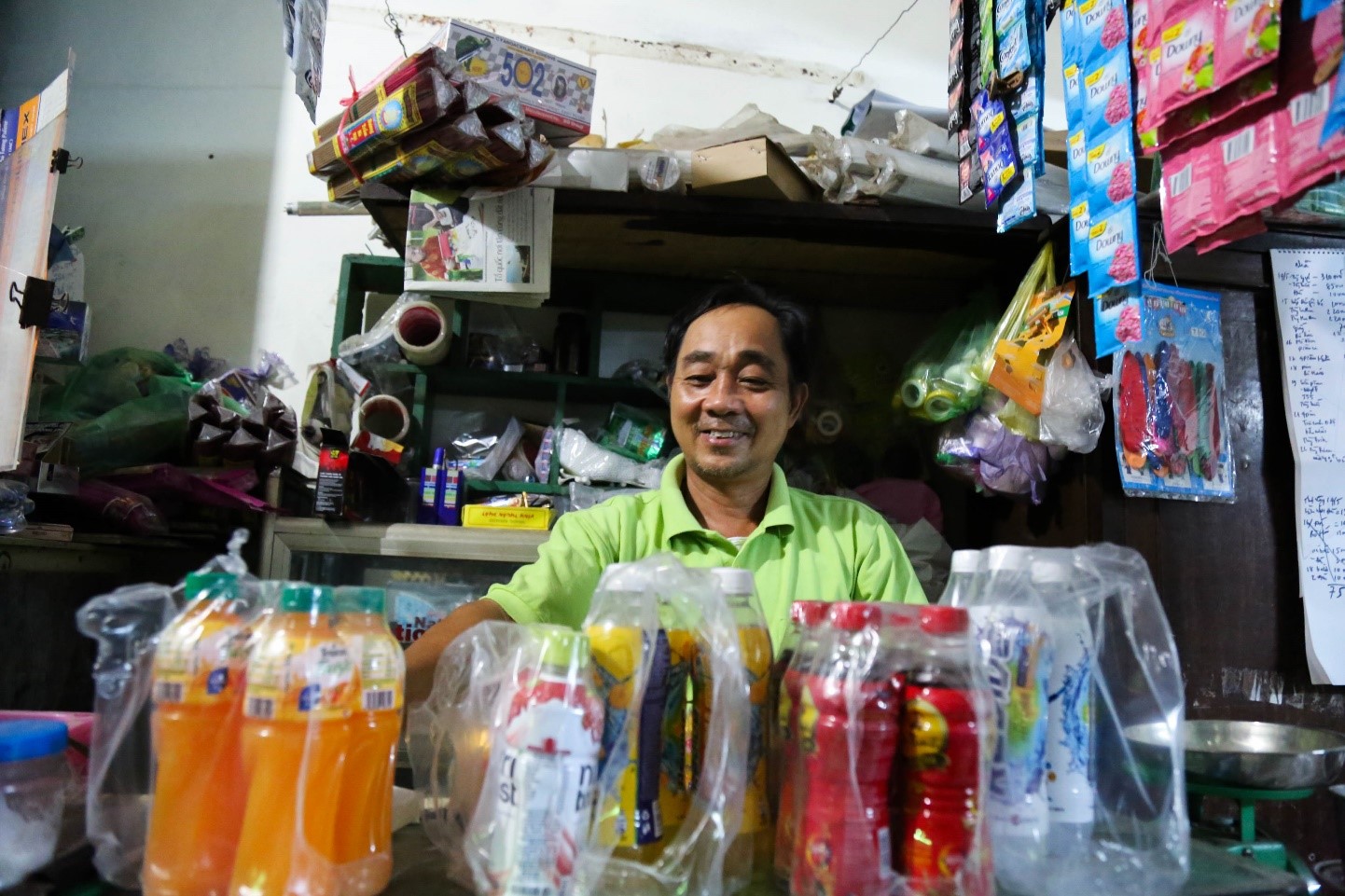 Vu Dinh Coi, 56, takes care of the housework and other chores for his wife’s rest. Photo: UN Women/Thao Hoang.

It’s 9 PM on a Wednesday night in Viet Nam’s central city of Da Nang. A group of six men are sitting around drinking beer outside a local home-based store and discussing the latest political and economic news. Meanwhile, inside, 56-year-old retiree, Vu Dinh Coi, is cleaning the house and washing the used glasses.

“My wife is sleeping. She usually goes to bed very early because she suffers from insomnia. She normally wakes up around midnight and has difficulties getting back to sleep. Most nights she sleeps for around four hours. I take care of the housework and other chores, so she can get a good night’s rest,” Coi explains.

Coi shares that in his community many men still consider themselves their family’s breadwinner and believe women’s place is in the kitchen. “They seldom do housework because it is not considered a “man’s job.” There are even some men who are violent towards their wives as a way of somehow proving their ‘power.’" 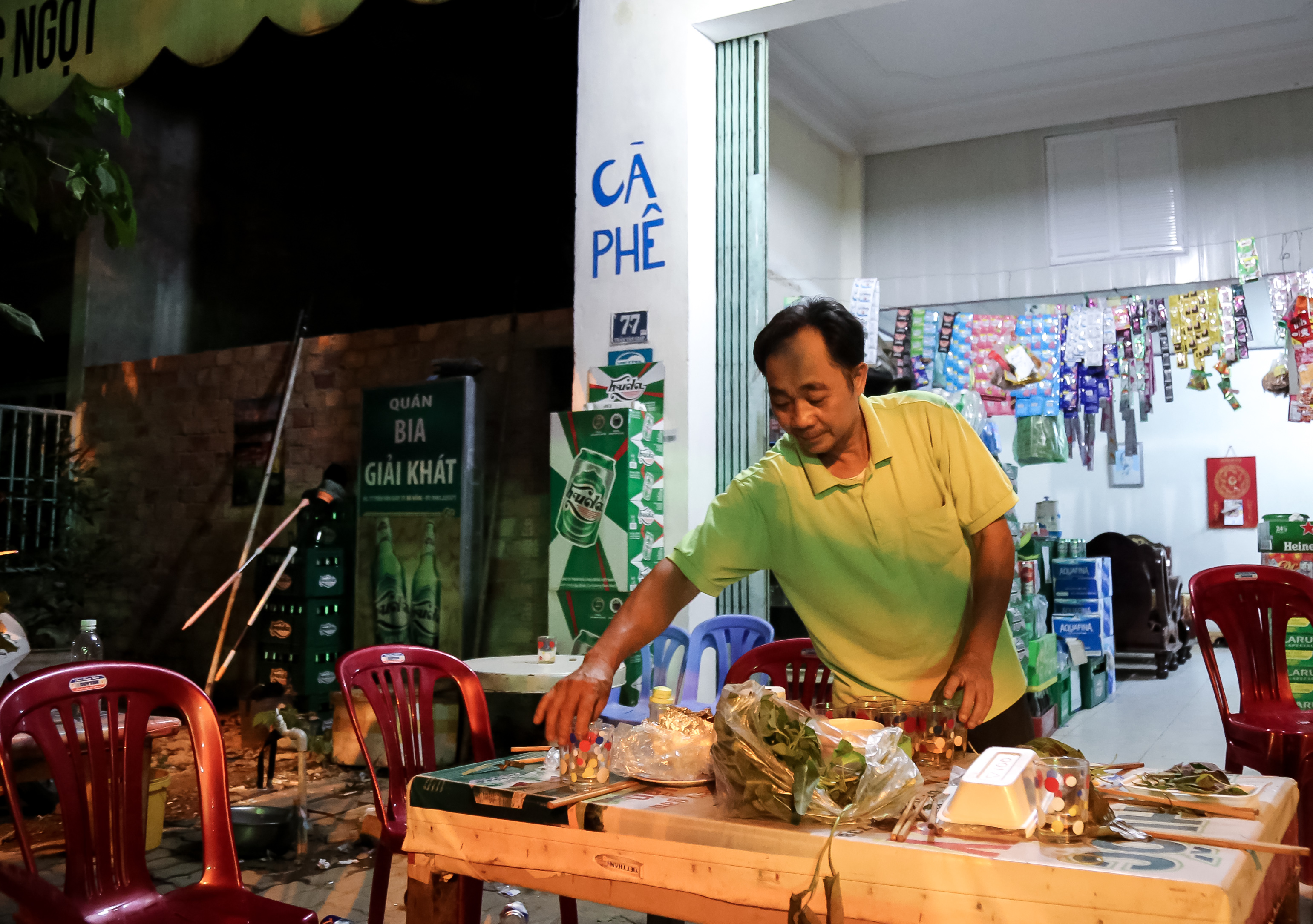 Coi says that he himself has changed a great deal since participating in the Male Advocates Club, which has been organized by UN Women and Da Nang Women’s Union in Hoa Phong district, Da Nang since 2016.

Thanks to the club’s training sessions, he now understands many of the root causes of violence against women and girls. He also recognizes the pressure of conforming to expressions of dominant masculinity that men succumb to due to gender stereotypes. 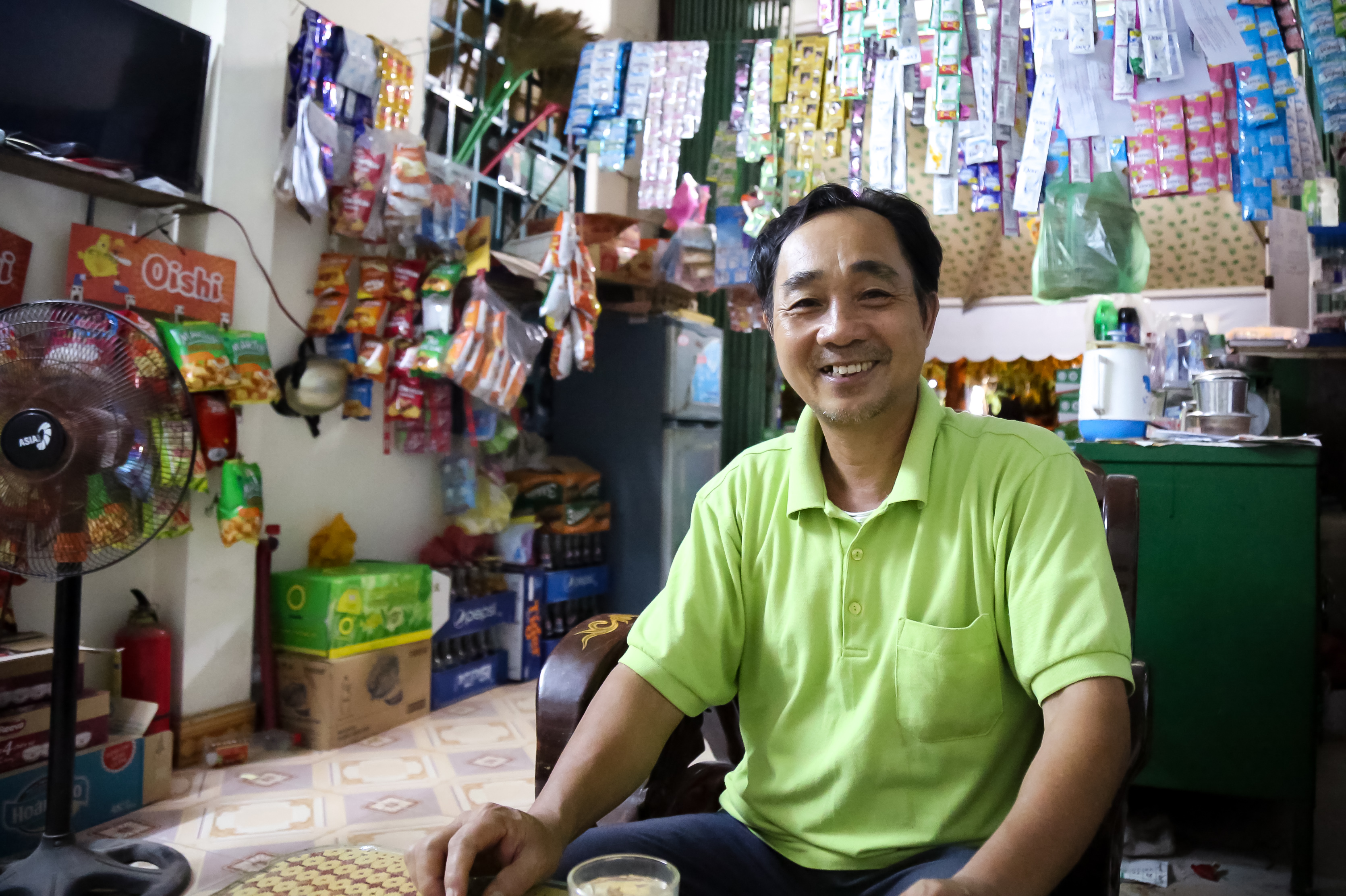 Coi confidently says that the root causes of violence against women and girls is patriarchy which also hurts men. Photo: UN Women/Thao Hoang.

“It all narrows down to the patriarchy which has thrived for too many years in Viet Nam. It takes time to increase men’s awareness of the patriarchy and change their behaviors. But everyone needs to recognize that being complicit in the patriarchy will prevent you from ever truly loving yourself or understanding others. The patriarchy hurts men too!” Coi now claims with confidence and conviction. 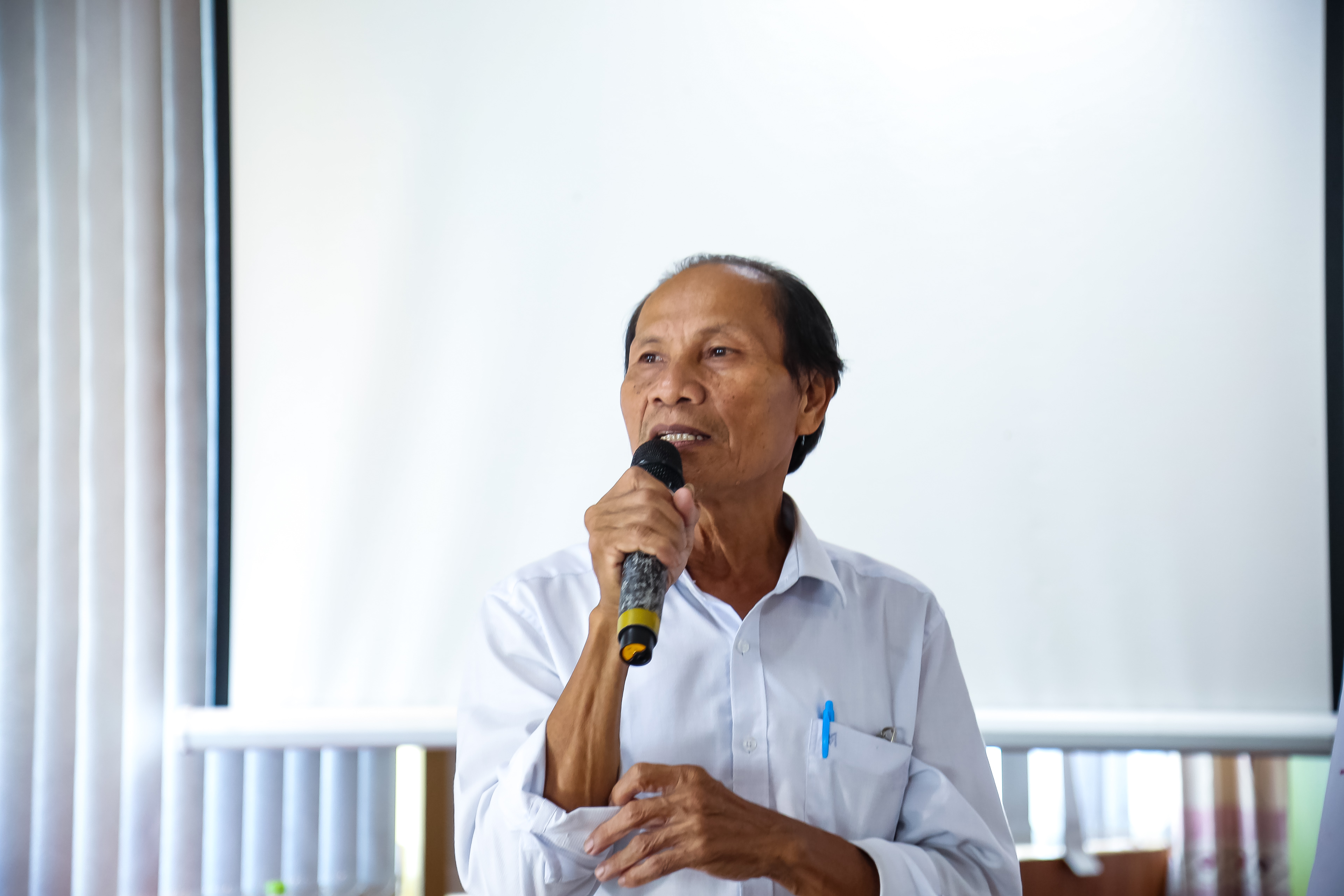 Tam Kim, 65, shares that he no longer behaves violently, and refuses to contribute to a culture of harmful masculinity. Photo: UN Women/Thao Hoang.

“I’m ashamed to say I hit her once, but I’ve reformed.”

Demonstrating the truth in Coi’s message, Tam Kim, 65, a retired officer in Da Nang, shares that he beat his wife.

Now a proud member of the Male Advocates Club, Tam Kim tells us that he no longer behaves violently, and refuses to contribute to a culture of harmful masculinity.

“Now I go to the market to buy food, clean my house and cook which was unthinkable for me before. Through the training, I have learned how to manage and restrain my anger. Before I would often yell and get furious when she [his wife] did something that I disagreed with. I would never ever use violence against my wife anymore. It’s never a good choice!” 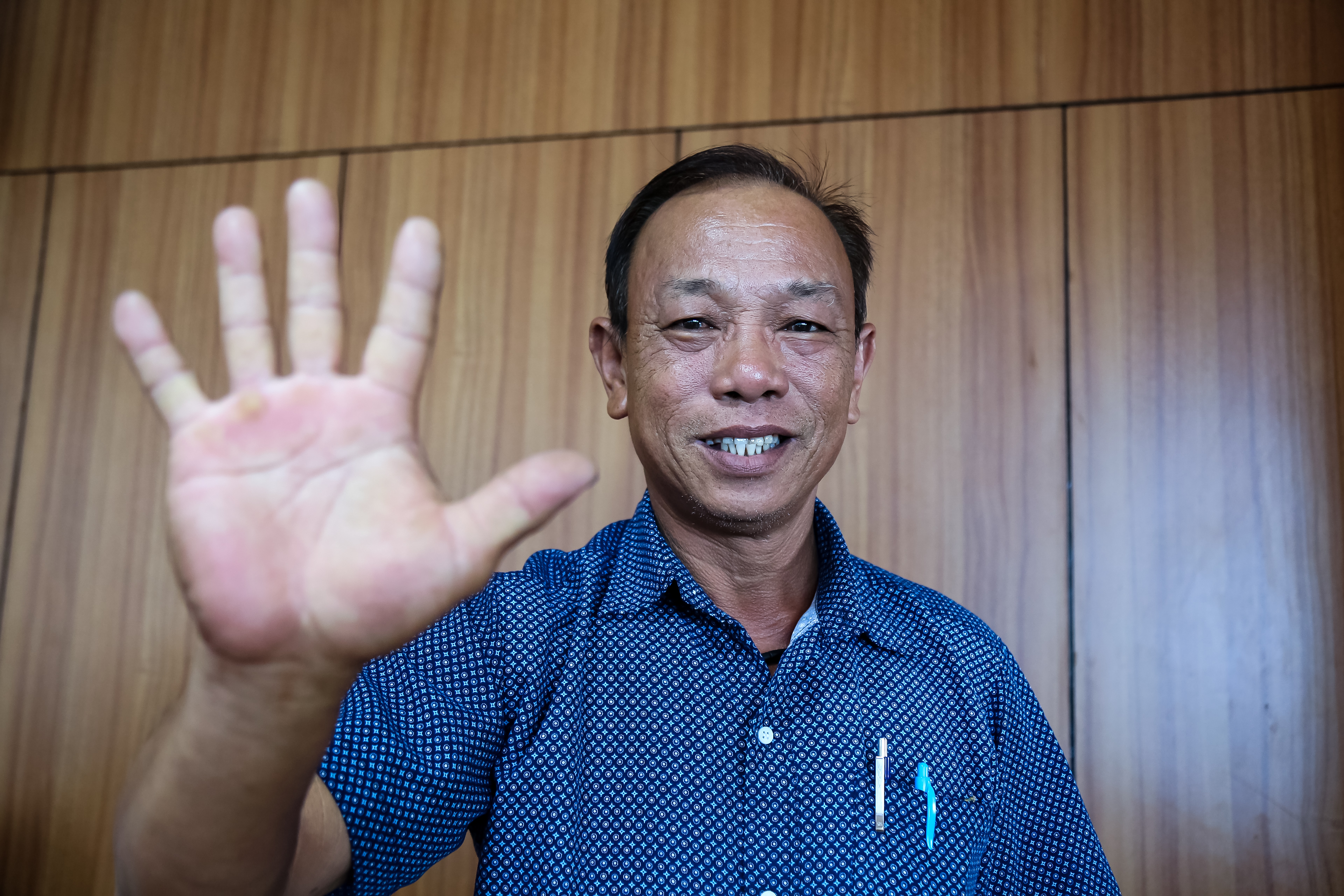 “I knocked the door down when he was pushing her around. I had to stop him!”

The Male Advocates Club doesn’t just aim to transform the behaviors of its individual members; it also encourages them to bring their knowledge back to their communities and positively influence others.

“Two years ago, my neighbor beat his wife badly. We heard her crying and begging him to stop but we thought we could not do anything because he had closed the door and left a big stick nearby to fight anyone who interfered. But I knocked the door down when he was pushing her around. I had to stop him beating her!” says Tran Quoc Hung, 54, a member of the Male Advocates Club in Hoa Vang district, Da Nang recalls.

Hung tells us that before the Male Advocates programme, most of the men in his village thought that domestic violence was a “personal matter” and “the right of the man to teach his wife how to behave.” However, many of them now realize that any form of violence towards their wives is completely unacceptable.

“The day after the incident, I went to talk to him with two members of the Men’s Club. We went out for a coffee and I explained to him the terrible consequences of violence to his wife and daughters and himself. It was not easy at first, but I persisted in talking to him for months. Now he’s no longer violent towards wife.”

About the Male Advocates Club in Da Nang

The Male Advocates and Volunteerism Club is a part of UN Women’s efforts to transform harmful masculinities and promote respectful relationships in the prevention of violence against women and girls in Da Nang, Viet Nam. The project is implemented by Da Nang Women’s Union with the technical support of UN Women, UN Volunteers (UNV) and Partners for Prevention. The intervention addresses key risk factors for violence against women girls, as identified in the UN Multi-Country Study on Men and Violence . Some notable factors that increase the risk of men carrying out gender-based violence as identified in the study include the exposure to violence in early life, a belief in the subordination of women, and the celebration of harmful masculinities and the notion of male “toughness.”

The intervention works with men of all ages to transform harmful masculinities and engaging them to become advocates in their communities for the prevention of gender-based violence. Men in the club receive training and take part in reflective discussions on VAWG and gender equality over the course of a year and they then use their skills to spread this knowledge to their peers in the wider community. Since 2015, the intervention has engaged more than 200 men in Da Nang, and its reach has the potential to benefit more than 2,000 people in the wider community.

Related News
13/08/2021
Delivering rapid and coordinated services to survivors of violence in Viet Nam
04/01/2017
In a community in Myanmar, a role model changes attitudes and actions
16/11/2016
Young people in Viet Nam organize to end dating violence
04/04/2016
Engaging men to prevent violence against women and girls in Viet Nam
27/05/2020
On the front lines of COVID-19, women’s organizations provide vital services as first responders as violence against women spikes
END_OF_DOCUMENT_TOKEN_TO_BE_REPLACED