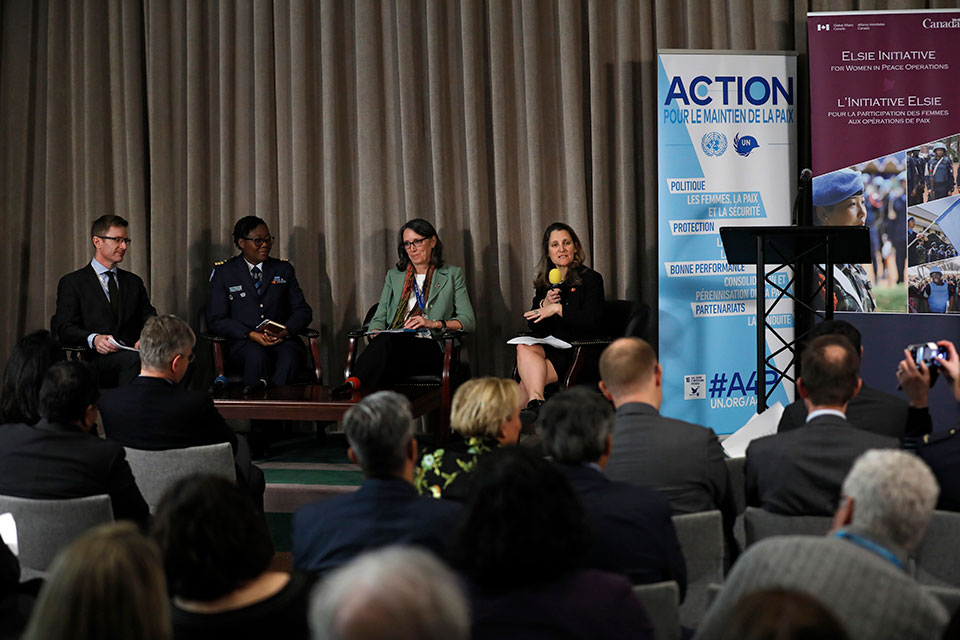 Today, a little more than five per cent of uniformed personnel in UN peacekeeping forces are women. At an event in New York on 28 March, UN Women, in partnership with the Government of Canada, the office of the UN Secretary-General, the UN Department of Peace Operations, and the UN Development Programme’s Multi-Partner Trust Fund Office, launched the Elsie Initiative Fund for uniformed women in Peace operations (Elsie Initiative) to increase meaningful participation of uniformed women in UN peacekeeping operations.

Speaking at the event, UN Women Executive Director Phumzile Mlambo-Ngcuka said: “As the Secretariat of the Elsie Initiative Fund, UN Women is committed to creating an enabling environment that allows and encourages uniformed women to serve in peace operations. The funds provided by Canada and other Member States will help to boost the number of women participating in decisions and actions relating to their own security, and that of their communities, and ensure that women’s unique perspective is included, whether they are in the field or at the peace table.” 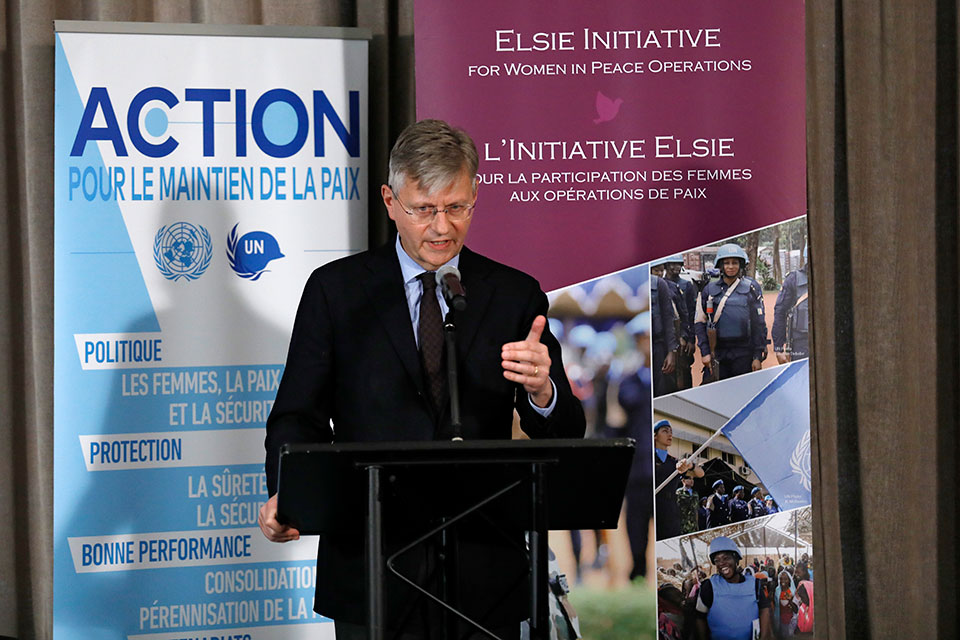 “The objectives of the Elsie Foundation represent an expression of our shared value for equality, the promotion of women’s right to serve,” said Jean-Pierre Lacroix, UN Under-Secretary-General for Peacekeeping Operations, highlighting that this is a top priority of the UN Secretary-General and it will increase the overall effectiveness of peacekeeping operations.

In all areas of peacekeeping, women personnel have made a positive impact, both in supporting the role of women in building peace and in protecting women's rights. They have proven, time and again, that they can perform the same roles, to the same standards and under the same difficult conditions, as their male counterparts.

Yet, the barriers to women’s deployment remain high. Women face obstacles in access to the necessary training, information about deployments, as well as institutional and attitudinal constraints. The UN Security Council resolution 2242 calls upon the Secretary-General to initiate, in collaboration with Member States, a revised strategy within existing resources, to double the number of women in military and police contingents of UN peacekeeping operations over the next five years. 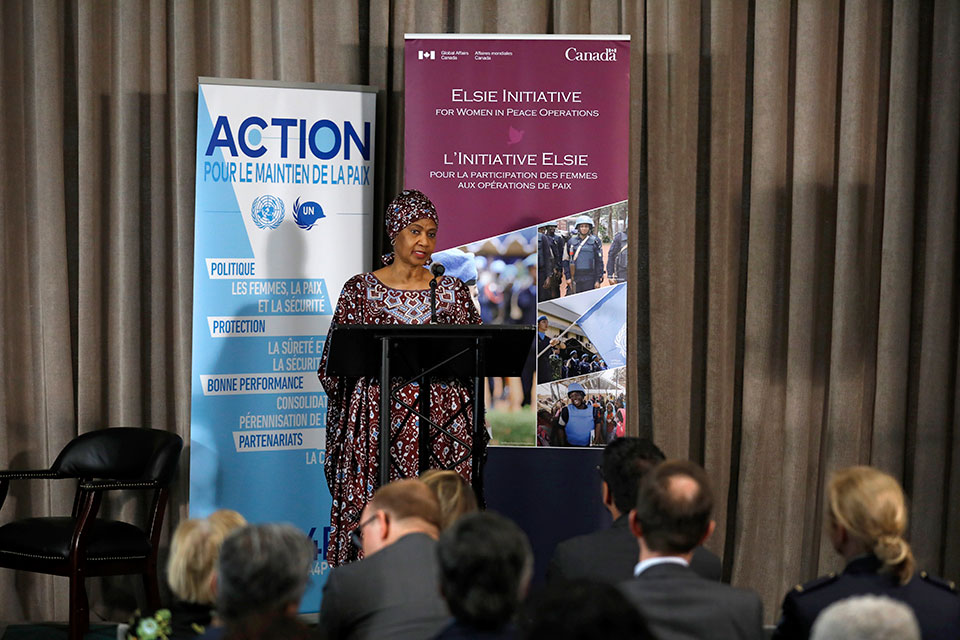 Since February 2015, the overall rate of uniformed women in peacekeeping has only increased from 3.9 per cent to 5.4 per cent. Men still represent nearly 95 per cent of the uniformed personnel in peacekeeping contingents, and at the current pace it will take several decades for military and police women’s participation in peacekeeping to reach the numbers necessary to reflect the population those forces are drawn from, and the populations in the conflict affected areas they serve.

“One central challenge for peacekeeping in the 21st century is the absence of women, whether as police officers, soldiers or leaders,” said Chrystia Freeland, Minister of Foreign Affairs of Canada. “Greater participation by women in the peacekeeping and peacebuilding processes will change the dynamics of these missions and pave the way for a more enduring peace.”

The Elsie Initiative provides access to resources for countries that contribute troops and police, and for UN organizations to support the deployment of trained and qualified uniformed women to UN peace operations.

At the launch of the Elsie Initiative, which has attracted global interest as a bold, insightful and unique intervention to increase the number of uniformed women in peacekeeping operation, Canada announced an initial contribution of USD 15 million, joined by the Netherlands (3 million Euros), United Kingdom (1 million Pound) and Finland (1 million Euro).

“Imagine walking around in a region recovering from war and violence, trying to be alert to any new outburst of aggression…and imagine that while you’re doing this, you have one eye closed and one ear blocked—that’s what a peacekeeping operation without women is,” stressed Minister of Defense of Netherlands, Ank Bijleveld, adding that having more female peacekeepers will provide more intelligence, and they can be powerful role models for women on the ground.

Wing Commander Theodora Adjoa Agornyo, who served as a peacekeeper in the Democratic Republic of Congo, spoke from first-hand experience: “I was one of the first few [women] to be trained in Congo…I was the only female in my brigade, but when I went back to work, I tried to put myself in almost every patrol that I could. It was tiring, but I tried to get information from the community, and you would be surprised, when women see female peacekeepers, they open up.”

“It is not women who need a voice, they have voices. They are there; they are ready. We just have to enable [them],” concluded Minister of State for the Commonwealth and United Nations at the Foreign and Commonwealth Office, Tariq Ahmad.

The Elsie Initiative is an opportunity for UN Member States to contribute to an inclusive and more effective future for peace operations, where forces are better prepared to deliver on their mission mandates and support enduring peace around the world.

Related News
10/06/2022
Harnessing the Power of Diversity and Inclusion for Transformation – The Elsie Initiative Fund Shares Results of Funded Projects in its 2021 Annual Report
31/01/2022
The United Nations Interim Force in Lebanon (UNIFIL) receives funding from the Elsie Initiative Fund to enable an inclusive environment in UN peacekeeping
27/05/2021
UN Women Executive Director visits Mozambique, calls for women’s leadership in peacebuilding and ongoing humanitarian efforts, and bold commitments for the Generation Equality Forum
28/04/2021
Press release: Liberia, Mexico, Niger, Senegal and Sierra Leone to tackle barriers to the deployment of women in peace operations with the support of the UN Elsie Initiative Fund
28/05/2020
From where I stand: “Although the situation is unpredictable, we are still working to maintain peace”
END_OF_DOCUMENT_TOKEN_TO_BE_REPLACED