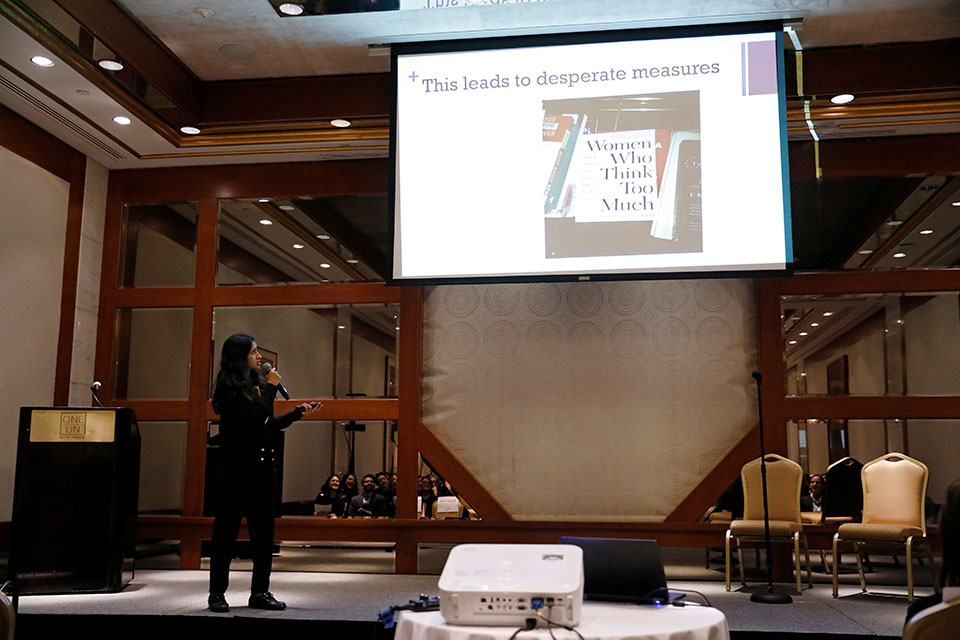 “I wanted to explore an issue a lot of women face. We’ll just be talking about ‘can women have it all?’—which is of course a question that society poses every so often, similar to things like:‘are women funny’; or ‘does she have to talk’; or ‘can a woman have a family and a career and friends and soccer’? I immediately think: well, maybe if you helped instead of asking me this question all the time,”joked comedian Aparna Nancherla during her appearance at the “Comedy for Equality” event on 25 March, in New York.

The event showcased UN Women’s work using comedy to promote women’s empowerment and counter extremism, as part of the “Empowered Women, Peaceful Communities” programme, funded by the Government of Japan. Nancherla and fellow comedians Tig Notaro and Natasha Vaynblat performed at the event. 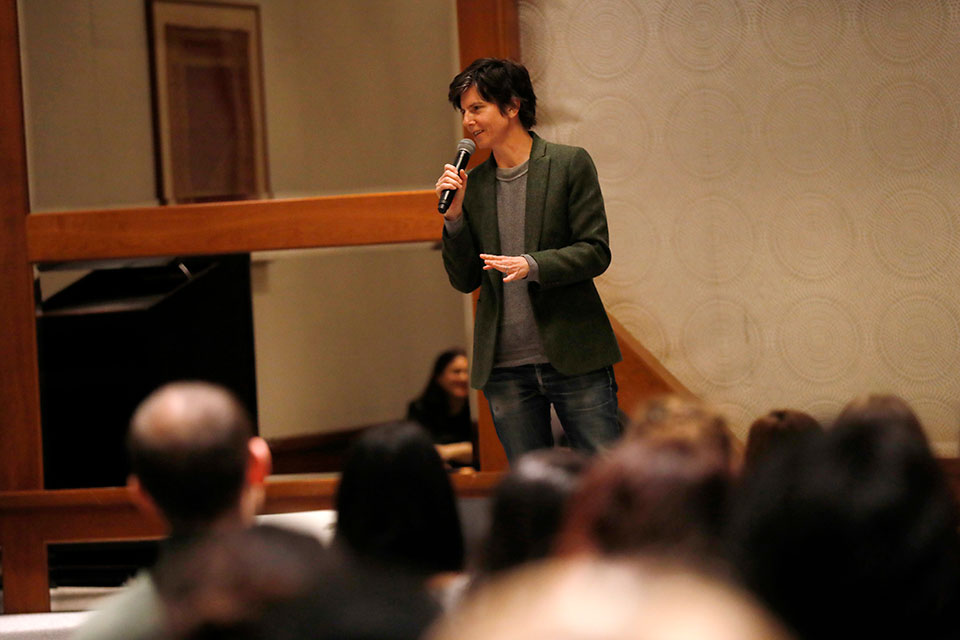 The “Empowered Women, Peaceful Communities” programme works on multiple fronts to is empower women in Asia to build resilient and peaceful communities, and prevent violent extremism. Built on the premise that empowering women in communities at risk of radicalization is in itself a prevention strategy,the programme boosts women’s economic and social empowerment, increases their leadership and political participation, expands research on the gender specific push and pull factors that drive the spread of violent extremism and ensures that national and regional counter-terrorism frameworks integrate gender. Since 2017, more than 40,000 women have been empowered to build resilient and peaceful communities, including 5,500 women from 175 communities in Bangladesh, Indonesia and the Philippines who benefited from economic empowerment initiatives that have helped them start small businesses, form cooperatives, and learn marketable skills.

Violent extremist groups increasingly use online spaces to promote radical messages, and recent research reveals that in most countries, women make up a significant proportion of those consuming content related to terrorism and violent extremism in online spaces, including through social media and internet search. Some 215,000 out of 630,000 internet searches on such content were made by women in Bangladesh, Indonesia, Malaysia and the Philippines; and out of 9,500 Facebook users associated with pages linked to such content 2,400 users were women.

To counter this narrative in digital spaces, UN Women partnered with Mythos Labs to create highly shareable comedic videos, like the ‘sheroes series’ that would spark public dialogues on these issues.

“Comedy is the most sharable form of content online,” said Alison Davidian, Programme Specialist for UN Women’s Regional Office for Asia and the Pacific, who moderated the New York event. “Comedy can open doors to complex issues. It can begin conversations and it can challenge social norms. When it is done right, humour can be a delivery system for truth.” 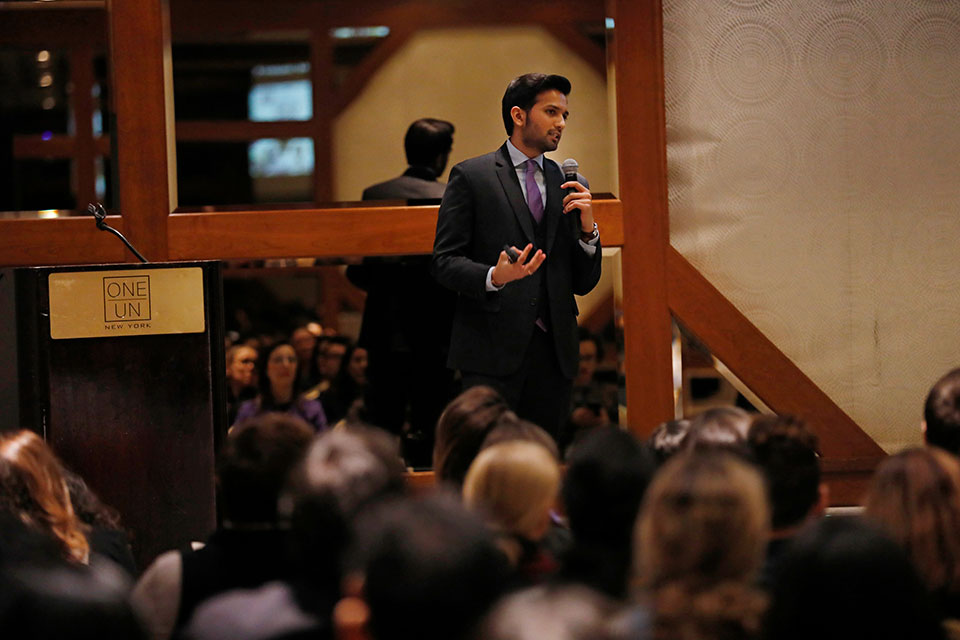 At the event, Priyank Mathur, CEO of Mythos Labs, presented the ‘sheroes series’, which Mythos created with comedians in different countries. The comedic sketch videos present the stories of empowered women who have defied social norms.

The comedy sketch, “India’s Next Top Role Model” shows how the stories of women trailblazers and those who have broken stereotypes to inspire young girls. The video features the true stories of unsung women in Indian history, as told by a mother in a toy shop.

The video from Malaysia presents a satirical take on a woman auditioning for a movie role and teaching the producer about inspirational and strong female characters he could be portraying through his films instead of perpetuating gender stereotypes.

The video from Indonesia takes place in the “Hall of Heroes” wing of a museum and highlights how few Indonesian women heroes are honored as compared to men. As the portraits spring to life, the heroes use humor to showcase the pioneering work of women who broke down cultural barriers in Indonesian history.

Nancherla echoed the critical role that comedy can act as a gateway for topics that areharder to approach otherwise.

“I think you can talk about topics that can betaboo—whether that's gender equality or mental health or even politically divisive issues—because you're talking from your own experience and your own story,” she said. “I think the more stories and experiences we can bring to the table in comedy, it enriches the lengths you can go in changing people's minds or just discussing a broadervariety of experiences.” 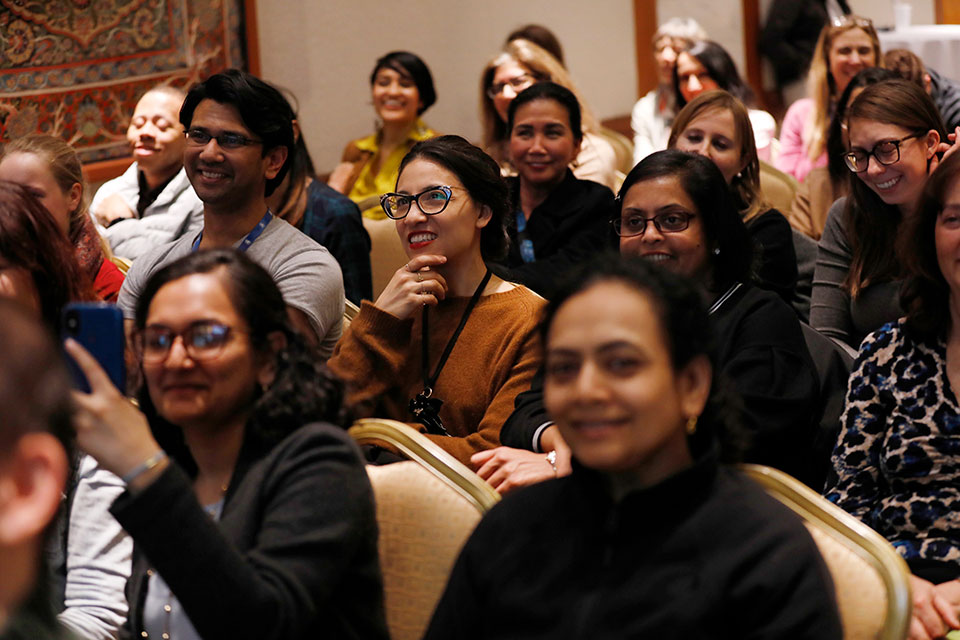 The “Empowered Women, Peaceful Communities” programme is working on the ground in communities across the region to prevent the spread of violent extremism. In Indonesia, nine communities have been declared “Peace Villages”, after community members came together to commit to fostering tolerance and peace. The concept of “Peace Villages” has received praise from the President of Indonesia. Indonesia’s counter terrorism agency, BNPT, plans to adopt Peace Villages as a strategy for implementing the National Action Plan on Preventing Violent Extremism, including by using the villages as pilot communities for rolling out the National Action Plan once endorsed.

UN Women will continue to firmly advocate for the empowerment of women to build resilient, cohesive and peaceful communities – with a particular attention to those who are most marginalized, including women living in at-risk communities as well as those migrating for work.