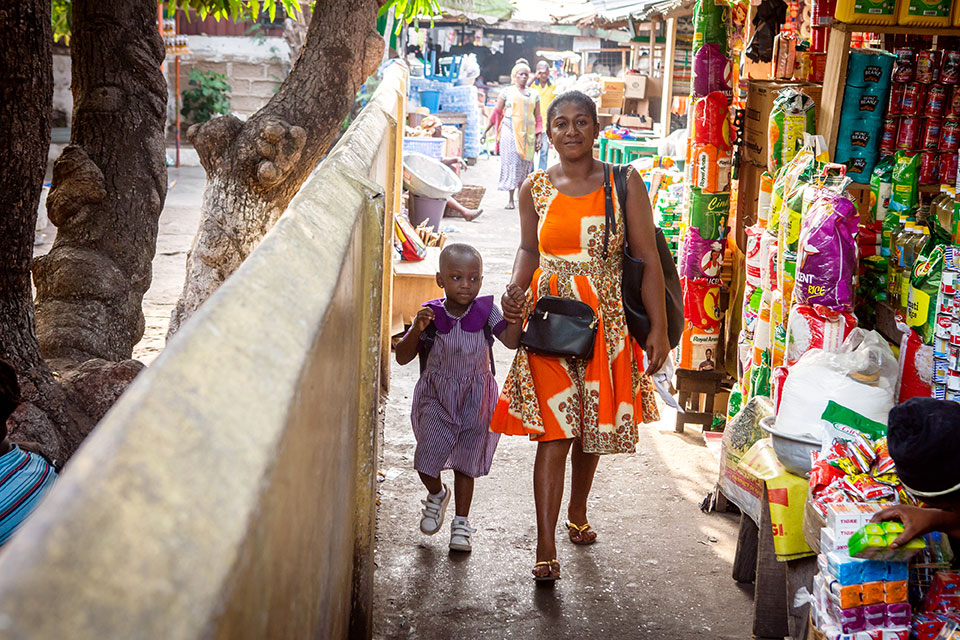 Before starting their working day, vendors can drop their children off at the Makola Market Childcare Centre. Photo: UN Women/Ruth McDowall

Every morning, thousands of women make their way to Makola Market, one of Africa’s largest urban outdoor trading centres, in the middle of Ghana’s capital, Accra. As well as their wares, many also bring their young children or carry babies strapped to their backs. 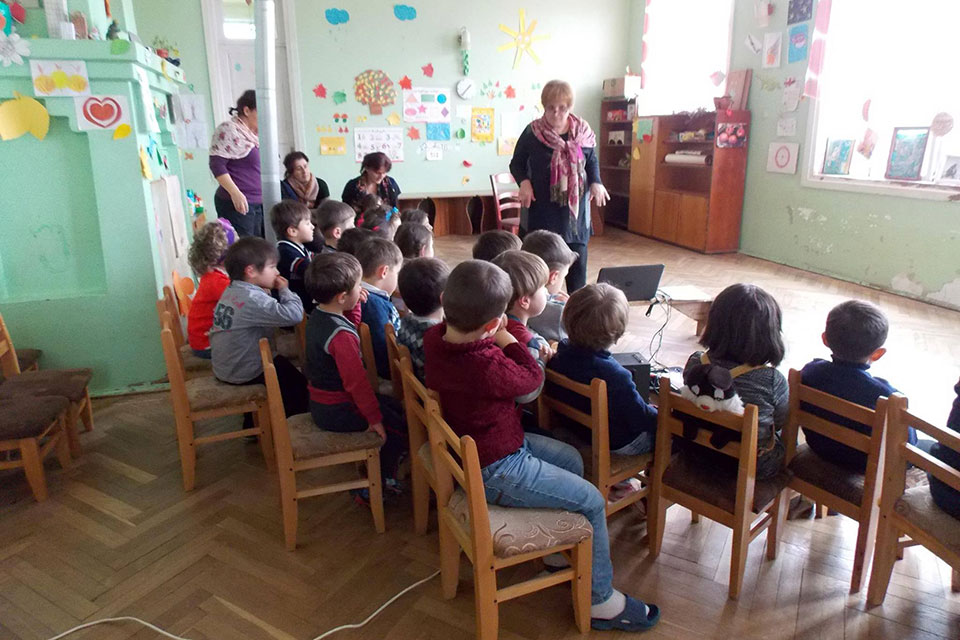 In rural Georgia women are asking for kindergartens, here’s why
What is the real value of unpaid work?

“Many women up and down the country depend on markets for their survival,” says Aunty Mercy, President of the Ghana Association of Traders (GATA), one of the country’s largest organizations of market traders and vendors. “Markets are not safe or clean places for young children, but often mothers have no choice but to bring them anyway, and this causes stress and anxiety.”

Globally, women do three times as much unpaid care and domestic work as men, including the majority of childcare. High quality, affordable childcare services for working parents—especially those in informal employment—should be part of social protection systems. They allow women to increase their incomes and boost gender equality.

Yet in Ghana, as in many other countries across the world, these services are simply not in place to support working women, many of whom have to rely on networks of relatives and friends or take their children to work with them.

At Makola Market, women traders and vendors are proving that childcare services designed for and managed by the workers themselves have the potential to change this.

Every morning, 140 children are dropped off at the Makola Market Childcare Centre before their parents start their working day.

“Our aim is that women are able to concentrate on their business and feel good about their children getting a good education from people who care about their wellbeing and their health,” says Aunty Mercy, who is also a trained teacher and manager of the centre.

First opened in 1983 with the support of the then first lady, Nana Konadu Agyeman Rawlings, the childcare centre was initially run directly out of her personal office, as a public service, in coordination with market traders’ associations.

Then when the Government changed in 2001, the Accra Metropolitan Assembly (AMA)—the city’s political and administrative authority—took over the running of the centre. Traders say that the management, quality and affordability of the childcare went into swift decline. 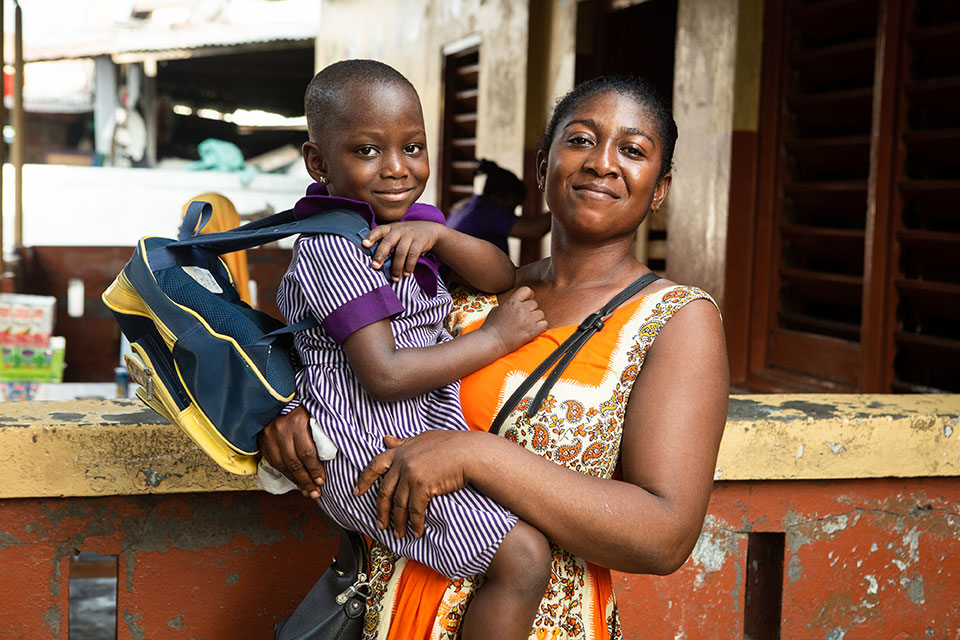 Nyhira and her mother use the Makola Market Childcare Centre in Accra. Photo: UN Women/Ruth McDowall

“The childcare centre was being run without the needs or voices of the women at the market being considered, and so we decided to take things into our own hands,” says Aunty Mercy.

Since then it has been run by a parent-teacher association (PTA), with representatives from GATA voted on to the management board by parents. Parents also provide food from their own stalls for the daily meal.

Staff welcome in children from 6 a.m. and close the centre after the last child is picked up. A flexible payment system is in place, with subsidies and free places for parents who cannot afford to pay the monthly fee.

Huge challenges still exist, especially around teachers’ salaries. While these were covered when the centre was under the control of the city, parents must now foot the bill for all its running costs. A national drive to reduce the public wage bill by 40 per cent has proved a significant barrier to requests for salaries to be paid by the Ministry of Education. 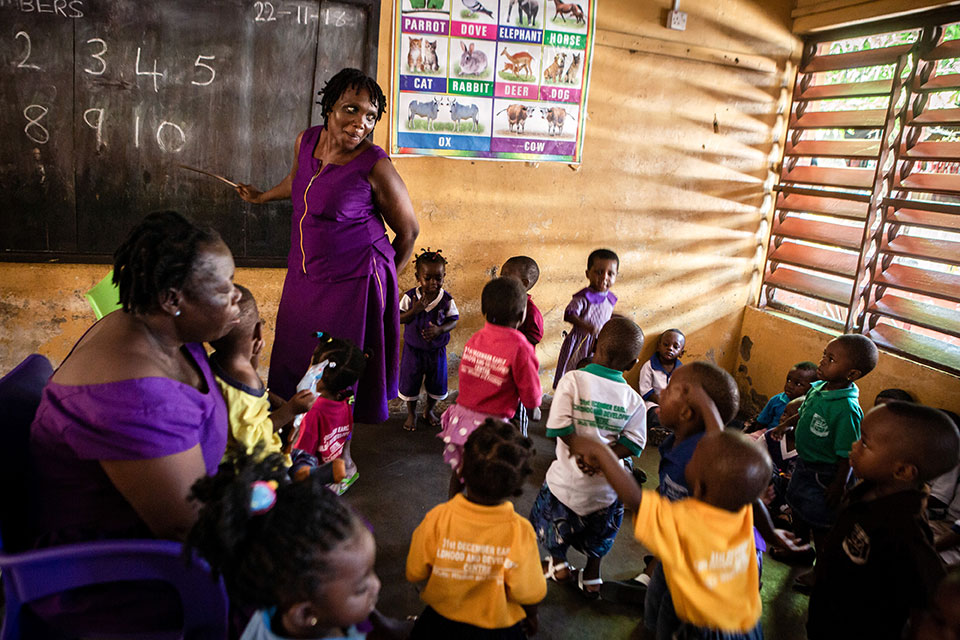 “The proven ability of the women traders to successfully run the centre at Makola in the face of hard economic challenges has made it a pace-setter in the campaign for more access to early years childcare in Ghana,” says Dorcas Ansah, Accra Focal Cities Coordinator at WIEGO, a campaigning group for women working in the informal sector.

Alongside groups such as WIEGO, parents at the Makola Market Childcare Centre continue to campaign for support from the municipality; they have also insisted that plans to modernize the market should include provision for a renovated childcare centre.

“We’d like to see public childcare centres like this in every market across the country,” says Ansah. “The women at Makola have proved it is possible.”

Related News
23/07/2020
Small business owners in South Sudan bear the brunt of COVID-19 as livelihoods shrink
30/01/2019
From where I stand: “I’m the first woman in my family to own property”
24/12/2018
From where I stand: “We must believe in ourselves that we can be leaders”
24/08/2018
From where I stand: “Because I know my rights, I can speak up for myself and for other women”
11/04/2017
Community leadership makes markets safer for women traders in Tanzania
END_OF_DOCUMENT_TOKEN_TO_BE_REPLACED