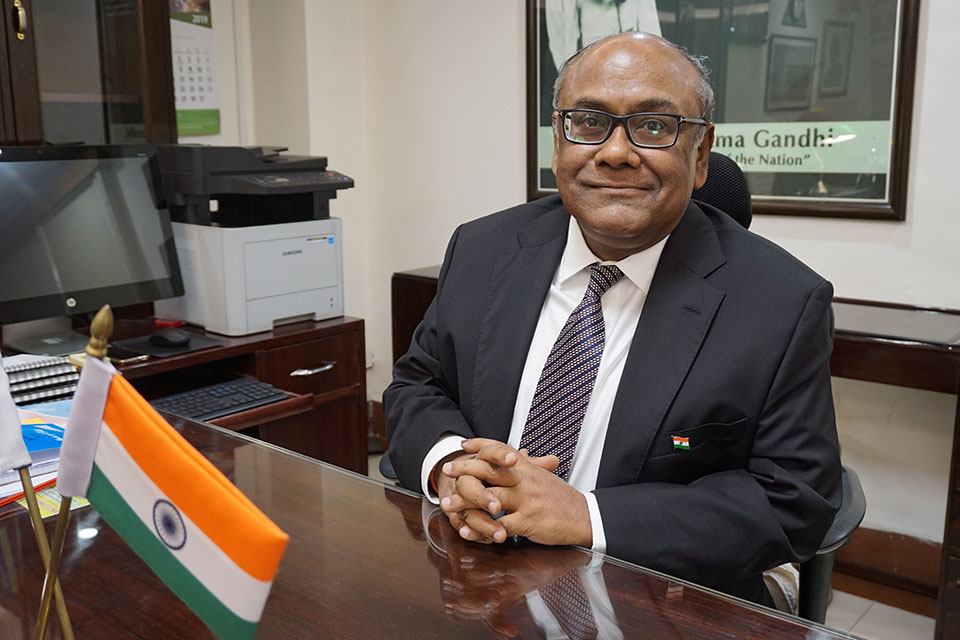 Rahul Bhatnagar serves as the Secretary for the Ministry of Panchayati Raj, a branch of the Indian Government responsible for the ongoing process of decentralization and local governance. UN Women works with the Government of India and local organizations to promote women’s leadership and participation in governance at all levels. In this interview, Mr. Bhatnagar elaborates on the importance of elected women representatives in the Panchayati Raj (local governance) institutions and their role in advancing primary education, health, agricultural developments, and women and child development.

India celebrates National Panchayati Raj Day (National Local Governance Day) on the 24th April. How significant are these local governance machineries in India? What kind of work does the local Panchayats do?

India is a very large country, in terms of area as well as population. We are one of the most diverse countries in the world, with numerous cultures, religions, and socio-ethnic practices, and this obviously reflects in the varied demands, needs and requirements of its people. The local governance systems or ‘Panchayati Raj Institutions (PRIs)’ play a crucial role in meeting these local aspirations. The PRIs are regularly elected, local self-government institutions in rural areas that were confirmed constitutional status as per the 73rd Amendment to the Constitution of India (Seventy-third Amendment Act, 1992).

At the village level, the PRIs, known better as ‘Gram Panchayats’ are charged with meeting the basic needs of its residents. All planning and implementation of programme for the social and economic development are carried out by the Gram Panchayats. For example, the panchayats (councils) are responsible for ensuring all basic services for citizens such as drinking water supply, affordable rural housing, public distribution systems for essential commodities, maintenance of community assets, education, women and child development, social welfare, and welfare of vulnerable sections of the society.

In many ways, this has accelerated the process of decentralization of power. Today, India has about 253,400 rural local bodies at the village level Gram Panchayats), and 6613 intermediary or block-level Panchayats, and 630 district level panchayats. There are about 3 million elected representatives of these panchayats, out of which 1.3 million are women. Thus, 70 per cent of India’s population is covered through these local governance institutions. It is fascinating to visualize how the rural community has been mobilized into an electoral process that empowers them to take decisions for themselves.

The panchayats are also provided requisite funds to manage their own affairs. The Finance Commission, constituted by the Government of India, mandates a certain share in the taxes collected by the central government to automatically flow into these rural local bodies. In a period of five years, more than 200,292 crore Rupees (about USD 28.61 billion) have been transferred to Panchayats for development purposes. This is of course, apart from the mandated share that the panchayats receive from their respective state governments. Also, key central and state government schemes and funds are converged at the Panchayat level to allow them to implement projects and to address the needs of the people more effectively.

What is the significance of Panchayati Raj Institutions (Institutions of Local Governance) in achieving the Sustainable Development Goals (SDGs) in India?

The formulation of the participatory Gram Panchayat Developmental Plan (GPDP) by the Gram Panchayats coincided with the adoption of the Sustainable Development Goals (SDGs) in 2015. The SDGs are global goals with local impacts and interventions, and the Panchayats in India play a critical role here, mainly because the key objectives of the GPDP include ensuring local economic development and social justice.

The GPDPs are annual roadmaps envisaged by elected representatives for the development of villages. They include plans for local infrastructure such as the construction of roads, toilets, schools, panchayat ghars (offices), rural housing, health facilities, community assets, and several programmes to advance development of women and children. The GPDPs empower the elected representatives to make decisions on their own, for the benefit of the communities they serve. The financial support they receive from the central and state governments through the Finance Commission devolutions assist them in developing such plans. Funds from other national and state schemes are also channelled to the villages to help further.

Thus, the PRIs, through the Gram Panchayat Developmental Plan, play a key and systematic role in the achievement of the SDGs, encompassing all sectors. They are vital in our efforts to help us break social barriers and in empowering our communities. I would also like to highlight here that the Elected Women Representatives (EWRs) are key agents for transformational economic, environmental, and social change in India.

Why are Elected Women Representatives often called the harbingers of change in rural political governance in India? What kind of changes have they shaped as elected representatives?

Nearly half of all the elected representatives in the Panchayati Raj institutions are women. They share responsibility of the work assigned to them as representatives of their communities, which has, in a way, provided them an opportunity to understand the local issues in-depth, and to raise their levels of capability, awareness and skills. As a result of such efforts, village level development has been brought in at much faster pace by these women ‘sarpanchs’ (village leaders).

Over the years, we have noticed that the Elected Women Representatives have become more articulate, conscious of their power, and have learnt to effectively tackle bureaucratic and political hurdles. They are also known to bring in greater transparency and efficiency to their daily administration and implementation duties.

There have been many notable instances where they have played an important role in bringing real change to the ground. Take the example of Ms. Chhavi Rajawat, a sarpanch (village leader) from a village in the Tonk district of Rajasthan. She gave away a lucrative job in the city to head her village. She brought about substantial change in her village by establishing water supply and solar power provisions, constructing paved roads and toilets, and setting up banks. Similarly, Ms. Arati Devi, a former investment officer with a leading bank in India, left her job to become one of the country’s youngest sarpanch leaders in her village in the Ganjam district of Odisha. Here she started a massive literacy campaign for women that helped achieve nearly 100 percent literacy in her village! Another example I would like to share would be that of Ms. Meena Behen, the first woman village sarpanch in the district of Vyara in Gujarat. She heads an all-women Panchayat in a predominantly patriarchal society where women were traditionally never allowed to even step outside their homes. Shestarted a self-help group that brought in a lot of economic activity to her village. Seeing these elected women in action— chairing meetings, taking decisions tackling social issues, and leading the development of their villages—inspires other women and girls who aspire to become leaders themselves one day.

What are the main concerns and challenges that Elected Women Representatives face in their line of work? How is the ministry supporting them to overcome these challenges?

The challenges and concerns that  Elected Women Representatives have to face in their line of work are many, as it is a process of social change, and social change does not come about easily. The initial struggle we had to encounter was lack of knowledge among the elected women themselves regarding the Panchayati Raj Act and rules, and this was compounded by illiteracy. The lack of experience in political administration, gender prejudice from predominantly male staff who work in the system, restrictions around women’s mobility, non-conducive work environments, and elected women being represented by their male relatives (as proxy or stand-in representatives) to lead deliberations and decisions, are all part of the problem.

The Ministry of Panchayati Raj has accordingly taken a series of measures to address these problems. Steps have been taken nationwide to facilitate the smooth functioning of Elected Women Representatives, including the construction of gender-friendly infrastructure, such as panchayat ghars or panchayat offices equipped with toilets that women can use. Likewise, in several Panchayats we have also tried to form teams that include persons who are computer literate, accountants, and junior level engineers to assist the elected women in the administration of their duties.

We have also developed capacity building and awareness programmes, not only for elected representatives, but also for government functionaries who work at the village, block, and district levels for the Panchayati Raj Institutions. These trainings equip representatives to become fully versed on laws, pertinent acts and rules.

We have helped them understand how Gram Panchayat Development Plans are formulated, and how central and state funds are devolved to the local bodies. The training sessions have also made the representatives more vigilant about ensuring there are no leakages in funds. We have also developed model guidelines, as well as manuals for the preparation of the Gram Panchayat Development Plans. These guidelines help Elected Women Representatives to list their priorities and to formulate the village development plans accordingly. Most recently, in January 2019, UN Women played a central role in partnering with the Ministry of Panchayati Raj to organiZe a national level capacity building session for 800 Elected Women Representatives across all states.

How are partnerships such as with UN Women significant in achieving national and global priorities? How can we deepen our engagement and create further positive impact on-ground and in the lives of the Elected Women Representatives?

UN Women has played an important role in strengthening various programmes run by the Ministry of Panchayati Raj related to the capacity building of Elected Women Representatives s. They have also helped us document international best practices on Gender-Responsive Budgeting, and other gender equality measures to be adopted at the local, block, and district government level. We have shared these best practices with the Panchayats through our quarterly newsletters. Our partnership has also helped us to analyse and finetune the guidelines that are used for the preparation of village development plans so that women’s issues and concerns can be incorporated and they benefit equally as men. Together with UN Women, we have been able to mobilize more than 100,000 Elected Women Representatives, public officials, and grassroot workers across the six largest states in India using innovative tools and models such as the Mahila Sabhas (Women’s Forums). Overall, our association with UN Women has helped us to strengthen our mandate. Our national agenda is similar to the UN’s commitment to “Leaving No One Behind” and Agenda 2030, and it cannot be achieved unless discrimination on the basis of gender comes to an end.