Ask an activist: How is Hollywood faring on gender equality and representation of women on screen and why does it matter? 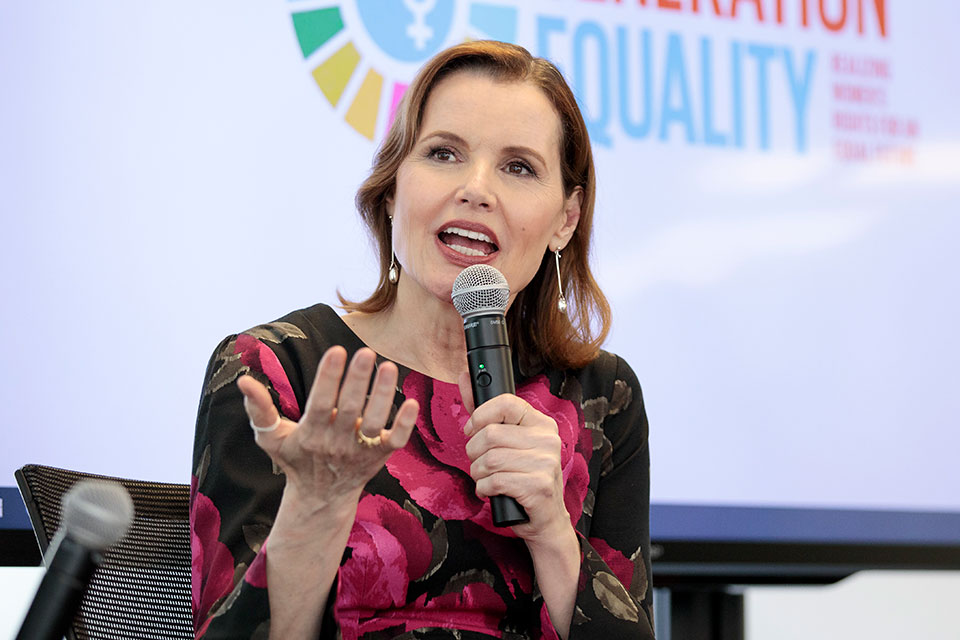 UN Women spoke to Academy-Award winning actor and activist Geena Davis, who the Executive Producer of This Changes Everything, a feature-length documentary just released, uncovering what is beneath the underrepresentation and misrepresentation of women in the entertainment industry. Research has progressed since the first-ever global study on female characters in popular film was commissioned by the Geena Davis Institute on Gender in Media, with support from UN Women and The Rockefeller Foundation. One third of all speaking characters in film are female, and less than a quarter of the fictional on-screen workforce is comprised of women.

“For nearly two decades now my focus has been on gender inequality in Hollywood and lack of female representation on screen and behind the screen, and how that impacts particularly young kids. The research by Geena Davis Institute shows that gender parity still does not exist on-screen. One third of all speaking characters in film are female and few women on screen hold positions of power.

We're showing boys and girls that boys are far more important than girls, by showing more male characters who do more things and more important things. And (on screen) girls are judged for their looks. When girls consume a lot of television, the more they watch, the fewer options they think they have in life. And the more television a boy watches, the more sexist his views become. If we could raise our kids free of unconscious gender bias, it would change the world.

We also looked at the 10 biggest markets around the world to find out, they are doing (compared to Hollywood). And the interesting thing we found is that so many countries are doing much better than the United States of America. In China, 50 per cent of the characters are female, why can't we do that? Almost 80 per cent of the media consumed worldwide is made here, in the USA. So we're responsible for exporting a very negative image of women all around the world.

I have realized that data is the key for making people aware of the problem, because so much of it is unconscious bias. I I don't think there is a magic bullet to solving the issue, but it starts with knowing what the problem is and stepping up to say, I am going to change this, I'm going to do better.

And we all must contribute to this change, because we were all raised with unconscious gender bias, even women. When I give talks, I often say, go back to your life and your world, look around you and count how many women there are and how many women are in positions of authority. It starts from there.”