Interview with Ville Skinnari, Minister for Development Cooperation and Foreign Trade of Finland 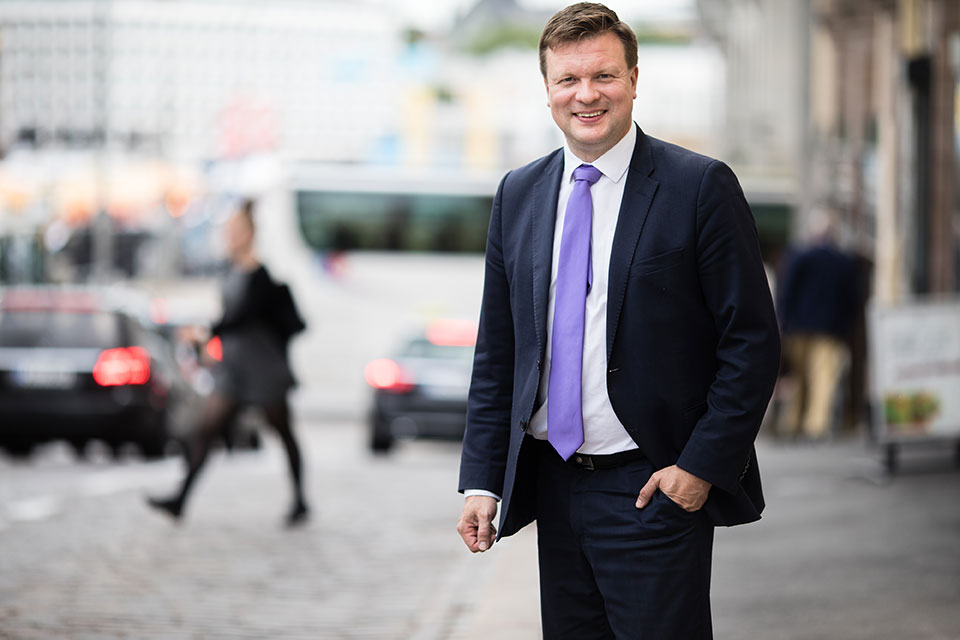 In 2019, the Government of Finland contributed regular resources of USD 11.12 million to UN Women. In addition, the Government contributed USD 8.95 million in other resources support—bringing its overall 2019 contribution to approximately USD 20.0 million and making Finland UN Women’s fifth largest contributor. In an interview, Minister for Development Cooperation and Foreign Trade of Finland, Ville Skinnari, explains why gender equality is Finland’s top priority in foreign and development policy.

Why is UN Women a good fit for channelling your development assistance?

Finland is a strong supporter of UN Women. Gender equality is our long-standing foreign and development policy priority.

We support gender mainstreaming across all policy priorities, as well as specific activities within the policy priority improving the status and rights of women and girls. UN Women is a unique fit as its triple mandate covers broad thematic reach, both in normative and operative work, but also the UN system-wide gender equality coordination.

Achieving gender equality requires standard setting, cooperation between different actors as well as actions at country level. UN Women is the leading organization for this work thanks to its mandate.

Gender equality is a human right. It is also a matter of fairness. The world cannot afford to ignore the potential of half of its population. Our Government programmes target for our development cooperation is that 85 per cent of new programmes should contain gender-specific activities and gender should be mainstreamed into all our development cooperation. This target is supported by new guidance and minimum standards on mainstreaming; gender analysis and data disaggregated by sex, disability and age will be required across all development instruments.

In our gender equality work we pay special attention to sexual and reproductive health and rights, eliminating gender-based violence, strengthening women’s economic and political empowerment, and enhancing the status and rights of women and girls with disabilities. We are fully committed to the 2030 Agenda and SDG 5 to achieve gender equality and empower all women and girls.

Finland’s strong commitment to gender equality is one reason why Finland is actively engaging with the Generation Equality process. Finland co-chairs the action coalition on Technology and Innovation in the process.

Unfortunately, the COVID-19 pandemic has deepened many aspects of gender inequality. It is recognized that women and girls suffer disproportionately the pandemic and its social and economic consequences. I think that it is critical that in the recovery phase women are included in all decision making. Economic stimulus packages must address the needs of women and girls fairly and equally. The pandemic has shown us that enhancing gender equality is more important than ever.

How does women’s empowerment and gender equality feature in your multilateral aid policy?

We strongly support multilateralism, the United Nations at its core. As gender equality is one of the priority areas of our foreign policy, we have been supporting UN Women since its foundation. This year Finland has increased support to UN Women core resources significantly and is the largest donor in core funding. In addition to UN Women, we have a long history of supporting UNFPA and UNICEF.

Finland has a strong history of support to UN Women, through both core and non-core funding, but being particularly strong on core. Why is core funding important for Finland?

Core funding is useful due to its flexible, comprehensive and strategic nature. It helps make the funding cycle more predictable and the organization as a whole more efficient. In order to address the urgent global needs, like currently in the COVID-19 pandemic, core contribution plays an important role.

In addition, we have been a strong supporter of the reform of the UN Development System from the start. One important objective of the reform and its Funding Compact is to increase the share of core contributions in UN agencies by all Member States.