What happened after COVID-19 hit: Uganda

Loyce Okalang: “She was holding the baby while on the phone with me, as her partner was trying to unlock the door”

Even before the COVID-19 pandemic hit, globally, 243 million women and girls were abused by their intimate partners in the past year. Since the pandemic, with lockdown measures, countries around the world have seen an alarming rise in reporting on violence against women, especially domestic violence. As COVID-19 continues to strain health services and compromise our economies and essential services, UN Women is working with women on the front lines who are responding to the pandemic of violence against women and girls every day. “What Happened after COVID-19 Hit” brings you some of their stories, and how our programmes are backing solutions that leave no one behind. 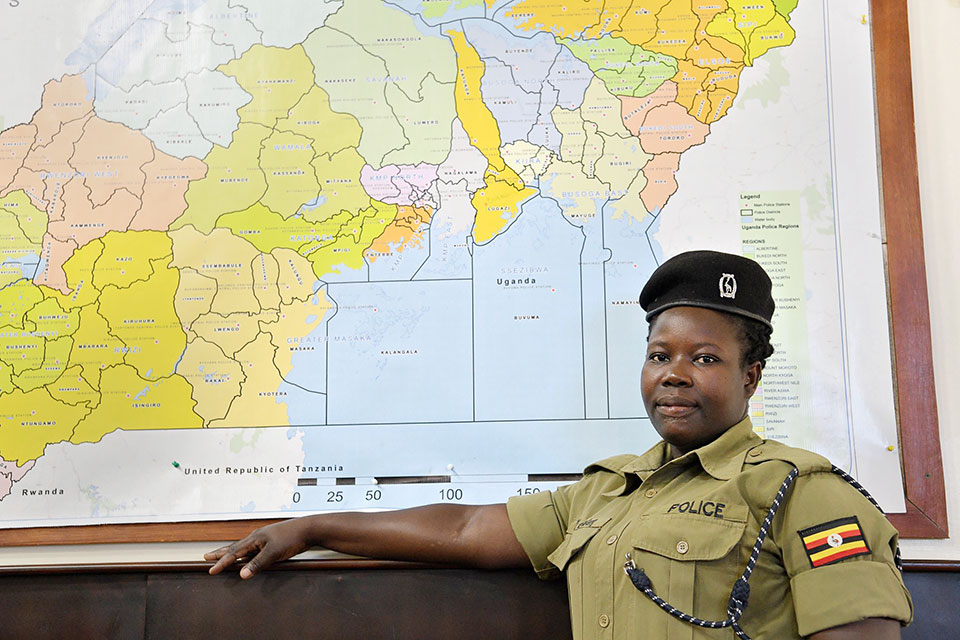 I was working at the gender-based violence call centre when a call came in around 1 a.m. Annette* was crying and out of breath as she told me she was in danger. I could hear a man shouting in the background.

The first thing I did was make sure I had written her address down correctly. While she was still on the phone, I directed the area police to her location and gave them her number so that they could follow-up with her directly in case they had trouble locating her. We were aware of the fact that she might not have continued access to a phone.

Annette told me that she had locked herself in a room in the house. I remember her saying, ‘I’m scared for my life and my children’s lives’. She has two children, aged one and six. She was holding the baby while on the phone with me, as her aggressor was trying to unlock the door. She had locked herself away because he had prevented her from leaving the house. The aggressor heard her on the phone to us, but I don’t think he believed that we would intervene.

Majority of the calls I receive relate to domestic violence. The toll-free line has had such a big impact on survivors who are scared to report [directly] to the police, but when they reach us, we dispatch the area police to the caller for immediate assistance. It has also helped connect survivors with police officers who are best equipped to handle gender-based violence cases.

Domestic violence became more pervasive during the COVID-19 lockdown because a lot of people lost their jobs and were frustrated as a result. Additionally, partners and co-habitants were locked up together and had no money to cater for their families. Women bore the brunt because they relied on their partners to provide for the family.

We receive calls from all over the country and we encourage our callers to share the toll-free number with other survivors.

To end violence against women we need sensitization and teamwork. We must encourage survivors to break the domestic violence cycle and ensure that women, men and children understand their roles in ending it. The government should implement strong laws to protect women and [we should] awareness on domestic cases through radio and television.”

UN Women responds through programmes on the ground

In Uganda, restrictive lockdown measures were put in place to curb the spread of the coronavirus. These measures served their purpose, however, movement restrictions adversely impacted women and girls experiencing violence.

In response to rising cases of violence, the Uganda Police Force with support from UN Women (as funded by the government of Sweden) established a dedicated a toll-free hotline for reporting and responding to cases of violence against women and girls. The hotline was crucial in providing a criminal justice response and access to services for survivors during the lockdown.

Police Constable Loyce Okalang is one of the 14 dedicated police officers handling critical lifesaving calls at the national gender-based violence call centre. The officers were selected from among the most experienced Child and Family Protection Unit officers within the Kampala Metropolitan Policing area.

Okalang has been in the force for ten years. She helped ensure Annette’s family received counselling, since Annette did not want her partner to go to jail because he was the breadwinner.

*The name has been changed to protect the identity of the survivor.

Related News
01/06/2020
From where I stand: “Due to COVID-19 people were not going to the police”
09/08/2021
I am Generation Equality: Immaculate Akello, climate change activist and lawyer standing up for rural women
20/05/2021
I am Generation Equality: Martha Clara Nakato, advocate for bodily autonomy and sexual and reproductive health rights in Uganda
28/04/2021
Take five: Young women leaders in Malawi are ready to build back better from COVID-19
09/12/2020
What happened after COVID-19 hit: Ghana
END_OF_DOCUMENT_TOKEN_TO_BE_REPLACED