Around the world, women play critical roles as first responders and leaders when humanitarian crisis occurs. They change and save lives in the hardest to reach places. Yet, their work is consistently under-funded and often unrecognized. As COVID-19 continues to ravage communities, the need to support women and women’s organizations in humanitarian action has become urgent. Through participatory videos, women in Bangladesh, Colombia, Jordan and Uganda share their perspectives.

During trainings in Uganda, women from the refugee community made a video called “South Sudanese women have a voice.” Photo: UN Women

In Quibdó, Chocó Department, Colombia, a group of women gather in a circle to perform a traditional women’s dance from the Embera Dobida indigenous community. Their clothes and scarves are colourful, their movements are lively, and their spirits are strong. They are united by the common threads of both strife and strength; displaced from their homes by decades of armed conflict in Colombia, these women now work to repair rips in their communities’ social fabrics.

In Chocó and around the world, women play key roles as first responders and leaders in crisis and the recoveries that follow. They change and save lives, often with limited resources and in the hardest to reach places.

Women and girls also have unique needs and vulnerabilities in crisis situations. They are negatively and disproportionately impacted by disasters and conflict, which affect their life expectancy, education, maternal health, livelihoods, nutrition, and the levels of violence they experience.

Despite the disparities, humanitarian programmes focused on women and girls are disproportionately underfunded compared to overall responses, according to a recent UN Women-UNFPA report. The report shows that not only is less funding being requested to address the specific needs and challenges faced by women and girls, the amount funded compared to the amount requested can range between 31 – 33 per cent for gender-based violence programming, 42 per cent for reproductive health, and 50 per cent for child protection. 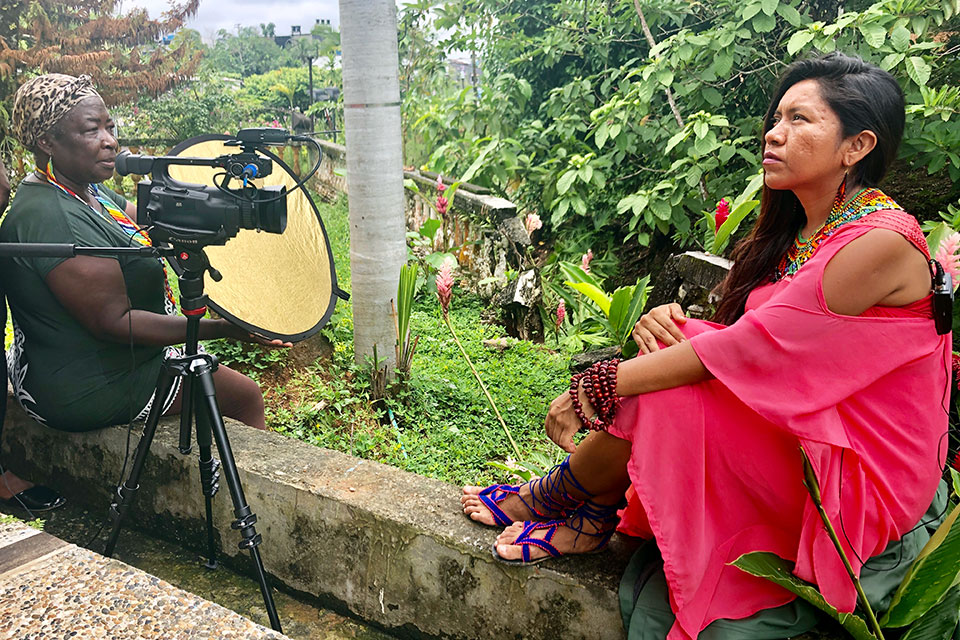 A UN Women research project funded by the U.S. Government, “Who Holds the Microphone” worked with crisis-affected local women and women’s organizations in Bangladesh, Colombia, Jordan and Uganda to create participatory videos through which they shared their initiatives and priorities.

“We have women’s organizations that have been here in the territory for over 22 years, resisting displacement, and still we have been able to organize ourselves and be part of many capacity building programmes, and political advocacy programmes,” says Damaris Palacios, one of the women community leaders from Chocó who participated in the department’s Women, Peace and Security Roundtable and spoke about her experience in a participatory video.

Over the years, her organization has built their capacity to help women and youth in the region, but she is clear that their progress has been hindered by a lack of funding. “We do not even have a shelter or an office where women can come to see us,” she regrets. 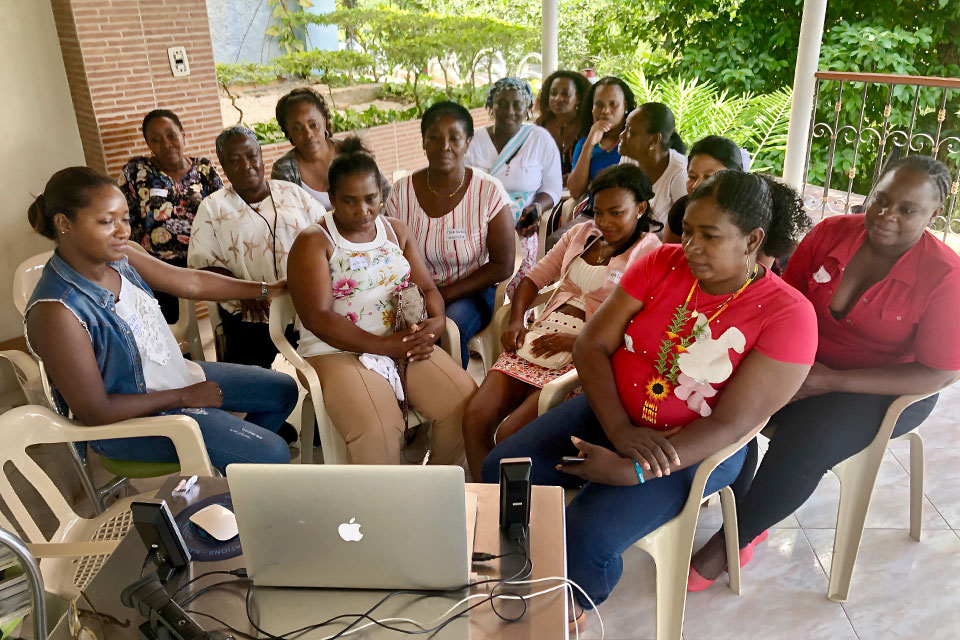 Women in Colombia watch back what they filmed as part of the first day of training in participatory video making. Photo: UN Women

In order to reach the women, Palacios and her colleagues make home visits their community, giving workshops, programmes, and capacity building activities to educate women about their rights and the value of their work.

The lifelines that local women’s organizations like Palacios’ provide in crises are critical. They help communities withstand shocks and challenges, recuperate, and gain resilience, yet they are chronically under-recognized and under-funded.

“Furthermore, because of their years of local wisdom and in-depth cultural knowledge, local women’s organizations are often asked to work in remote and challenging locations, yet their expertise is often unrecognized and left out of programme design, delivery, monitoring, and evaluation processes,” says UN Women’s Research Analyst, Maria Fernanda Novelo Duarte.

“As the world grapples with the unprecedented impacts of COVID-19, including the additional barriers for women and girls to access humanitarian services, the erosion of women’s livelihoods and rising gender-based violence, the work of local women’s organizations in humanitarian settings has become even more challenging under lockdowns, quarantines and restrictions of movement. The need for deliberate and increased support for their leadership in humanitarian action has become more urgent,” she adds.

In Za'atari refugee camp, Jordan, women are also leading extraordinary efforts with limited funds. Without any assistance, Reema and Zaad co-founded a self-organized group of young women called EVE. By identifying the needs in the community and connecting resources, the two have been able to make an impact without a budget.

Reema and Zaad asked street market vendors if they wanted to donate to unaccompanied children in the camp, and many accepted. The girls then took the children to the shops, where they got to choose clothes as a gift for Eid. 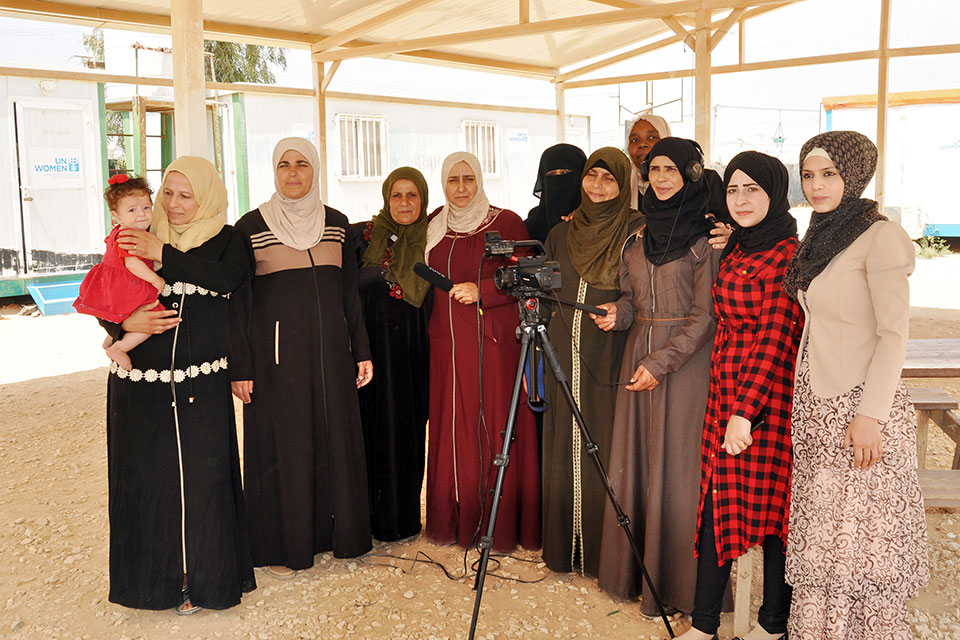 Syrian refugee women in Jordan after they finished recording their participatory video entitled: "Woman is the spirit of life". Photo: UN Women

“Many people imagined, ‘a group of girls… what will they do?’ But we did big things,” says Zaad. “We made something, and we are proud,” adds Reema with a smile.

EVE is just one example of countless women and girls around the world meeting needs during crises with little to no resources. Given adequate funding and support, the sky is the limit on what they can achieve.

While funding for gender transformative programming may not be seen as ‘life-saving’ within traditional humanitarian remit, it is critical for delivering basic services as well as durable solutions.

In Yumbe District, Uganda, Charity Faridah, Subcounty Councilor, District Speaker for the local government, and Chairperson of the Women Caucus, places great importance on creating lasting positive impact with humanitarian funding. As of March 2020, the Yumbe District hosts nearly a quarter million South Sudanese refugees, and Faridah ensures that planning and budgeting for women in the refugee and host community are gender-responsive and address women’s increased needs in terms of health, education, and leadership. 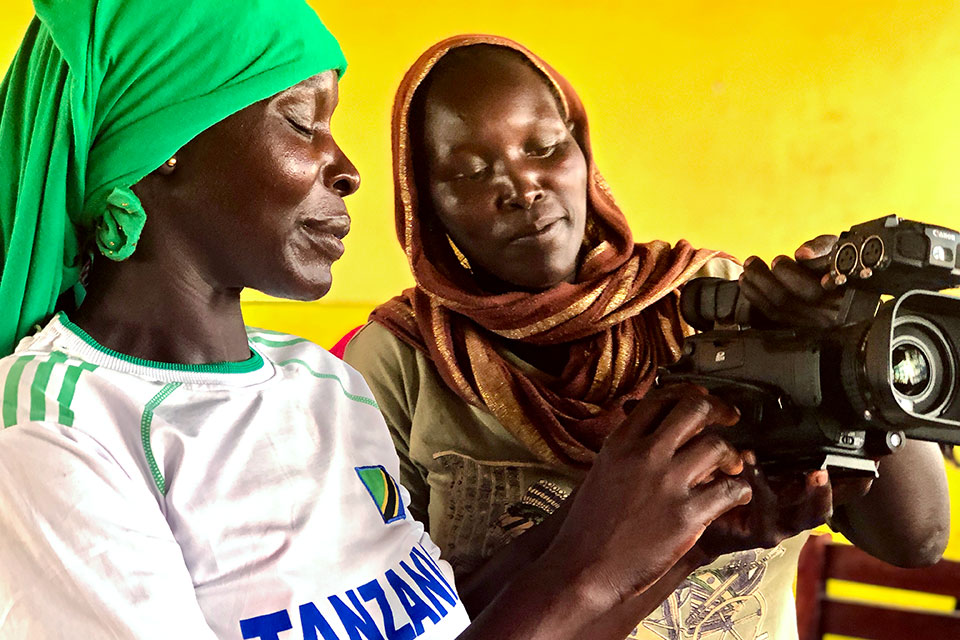 Members of the host community in Uganda women during their training on participatory video making. Photo: UN Women

“There is need and importance to fund gender related activities,” she says. “People still think women cannot lead. You really need to fund more of these projects that talk about women’s empowerment to allow us to realize, to allow the world to realize, that if a woman is empowered, the whole family is empowered.”

As Faridah highlights, not only do gender transformative programmes benefit whole communities in the long term, the investments pay off financially, as well. Global evidence indicates that the benefits of gender-focused action are sizable and justify more intensive funding for women and girls, delivering average returns of USD 8 for every dollar spent.

Transitioning to a mindset that prioritizes women and girls in crises is a crucial step forward. Shifting the paradigm so that humanitarian actors complement the work that local women are already doing is also key.

“Inside the camp there are so many groups, their own self-organized groups,” says Razia Sultana, a Rohingya lawyer and activist who has lived in Bangladesh since childhood and runs a safe space for Rohingya women in Cox’s Bazar refugee camps. “It’s their own effort, so these groups need support from outside,” she says, but they are not receiving assistance from the humanitarian actors in the area.

Sultana argues that, while NGOs often prioritize support for their own projects, groups, or initiatives, local women’s efforts should be the focus. “They are the ones who can create community...That group that was made by themselves, from their own needs, own rights, and own voice.”

Related News
22/09/2022
Ukraine and the food and fuel crisis: 4 things to know
19/08/2022
In Uganda, refugee women’s leadership drives inclusive humanitarian action
17/08/2022
Statement: In solidarity, we honour the global humanitarian community
15/08/2022
In focus: Women in Afghanistan one year after the Taliban takeover
15/08/2022
Statement: ‘Meticulously constructed policies of inequality’ – Afghanistan one year on
END_OF_DOCUMENT_TOKEN_TO_BE_REPLACED