From where I stand: “If women are not part of decision-making processes… all the achievements we made would vanish”

Naheed Farid was among many women leaders who left Afghanistan, fearing for their lives, as the Taliban took over in August 2021. Farid spoke at the UN recently, calling for international support to address the unfolding humanitarian crisis in Afghanistan and to safeguard women’s rights. 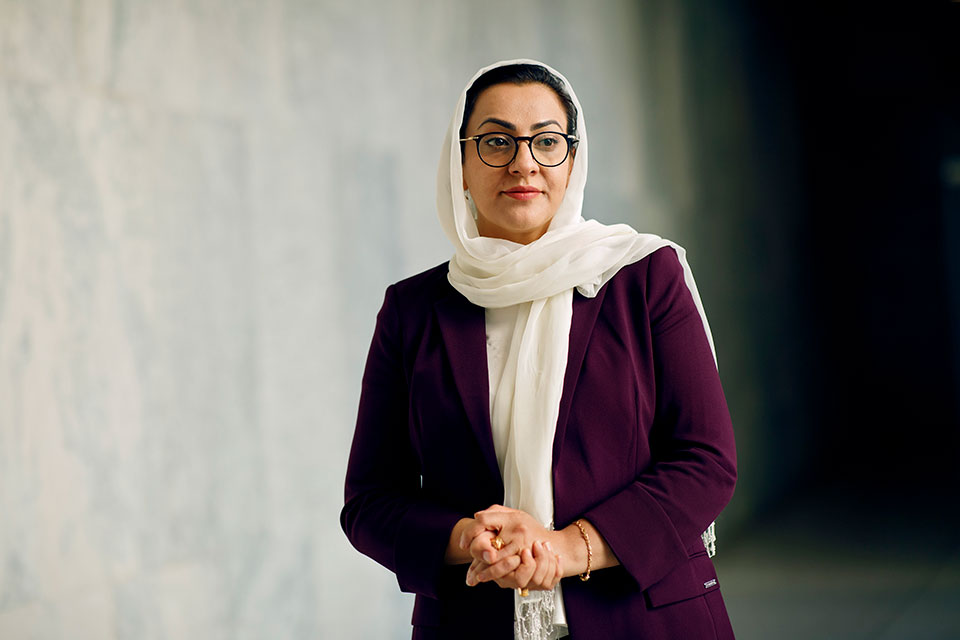 For me, the tragedy didn’t mean a disaster, it meant having to choose between two difficult choices – to leave Afghanistan or stay under the Taliban. I left Afghanistan one week before Kabul fell, with my children. They said, Herat, my city, would be surrendered to the Taliban.

I left behind the house where I fell in love with my husband and had children. I was a public representative for 12 years… I knew every part of the city, its problems, its strengths. I had my staff, my constituents, and people who helped me. I left all that behind, taking only clothes, my phone and diapers for the baby. As I left, I thought, am I going to see my city, my home again?

Shortsighted policies jeopardized Afghanistan’s situation. Afghanistan is a humanitarian disaster that needs immediate and concrete action by the international community. We want a trusted corridor to be established immediately, where civil society and humanitarian actors can help the people in need. Half of Afghanistan’s population is experiencing food insecurity.

The Taliban want recognition, but they have to be held accountable to safeguarding human rights. They must set up an inclusive government, not all-male, all-Taliban cabinet. They must allow girls and women to study. Afghanistan is the only Islamic country right now where girls cannot go to secondary school.

Women’s rights are human rights. If women are not part of decision-making processes, if they are not part of the political space, all the achievements we made would vanish. We had reserved seats for women in the electoral law, we established six months of maternity leave for women in the labor law, we passed the citizenship law that allows women to pass on citizenship to their children. We made it mandatory that mothers’ names would be on birth certificates. Women parliamentarians made a lot of difference. When the law on ending violence against women was lacking implementation, we asked, why, and persisted.

After 20 years of so many insecurities and impediments, Afghan women became ministers, women’s rights activists, pilots, athletes and led robotic teams. The women of Afghanistan are a source of pride for the country. And we had to fight for whatever we have today. When you gain something, you don’t give it up. We will fight for this… you will see.”

At 27, Naheed Farid became the youngest elected Parliamentarian in Afghanistan in 2010. Farid has also founded and led various NGOs assisting women and children and supporting rural community development. She is a vocal advocate for women’s access to education, employment, political leadership, and for ending gender-based violence. Farid had to flee from her home in Herat with three children, aged twelve, six and two, as the Taliban took over Afghanistan in August 2021.

Related News
16/03/2022
Afghan women call for global attention and action to meet the needs of women and girls in Afghanistan
29/11/2021
From where I stand: “Women coming together, working together, kept me going… Now, we live in fear.”
12/10/2021
Expert’s take: Gender equality is critical for Afghanistan’s future, long-term development, and sustained peace
21/01/2023
Afghanistan: Top UN delegation tells Taliban to end confinement, deprivation, abuse of women’s rights
27/12/2022
Statement: The decree barring women in Afghanistan from working in non-governmental organizations is yet another stark violation of women’s rights
END_OF_DOCUMENT_TOKEN_TO_BE_REPLACED