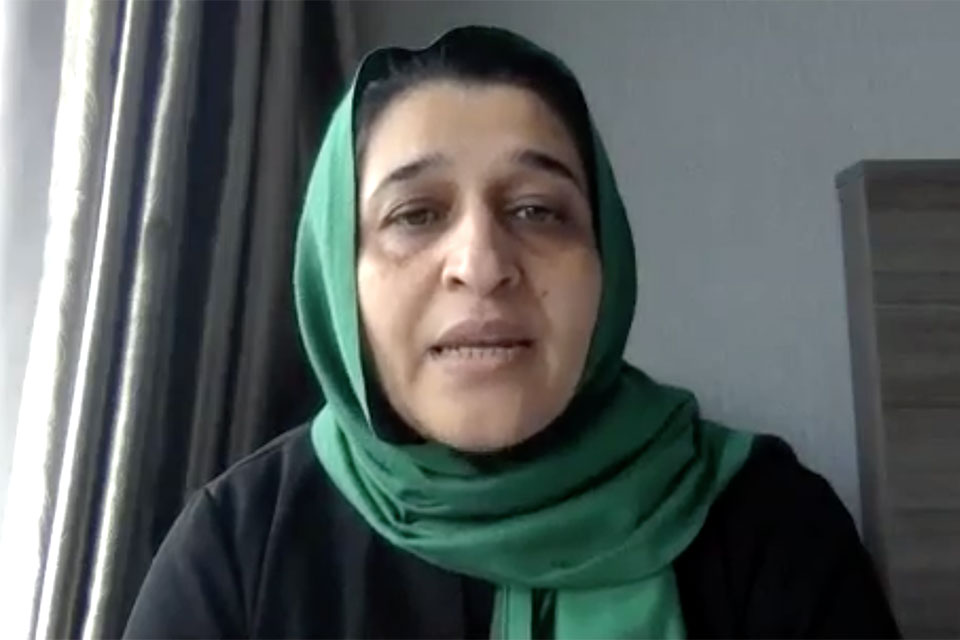 Hasina Safi served as Afghanistan's Acting Minister for Women from May of 2020 until August 2021, and as Minister of Information and Culture before that. Ms. Safi has over 20 years’ experience in women's development programs working with Afghan civil society organizations, international organizations and UN agencies. She has been one of the strategic advocators for women’s rights, representing civil society and Afghan women in national, regional and international movements. Ms. Safi, who had to flee Afghanistan after the Taliban takeover of Kabul, spoke to UN Women about the current situation for Afghan women. With the ascent of the Taliban, the future of women leaders, from all walks of life, who have shaped the social fabric of the country, is unknown. The uncertainties have cultivated fear in women across the country given the vivid memory of the Taliban’s previous rule (1996-2001), which was marked by implementation of gender segregated rules that curtailed the rights of women and girls.

What are the most urgent needs of women and girls in Afghanistan? What should the rest of the world understand about their situation right now?

On the whole the situation is uncertain for all the people of Afghanistan, and more specifically for women. So far, there have been several concrete directives about the participation of women, including the women's ministry not being in the list of ministries. The directors in different ministries and organizations were sent home. Then there is uncertainty about girls’ going to school.

The most urgent needs of women and girls in Afghanistan fall into two categories: policy action and grassroots responses.

Women who I am in contact with are hiding every day, sending me messages because there is not one place or organization to communicate and to discuss with them what's happening.

Can you describe the women's rights movement in Afghanistan?

We started based on the Constitution, which is the mother national document in Afghanistan, which had very clearly defined the participation of women. Based on that Afghanistan, as a nation, had accountability towards women's empowerment and participation. Afghanistan ratified CEDAW without any reservation,  implemented the UN Security Council resolution 1325,  adopted the Beijing Platform for action and supported the Human Rights Declaration. These were the commitments  made the by Afghanistan and the international community to support the women of Afghanistan.

How can the international community help preserve these gains and the rights of women in Afghanistan?

International support needs to be based on very clear, defined mechanisms of mutual accountability and monitoring to really see who is doing what and how much support is really reaching women.

We want to help women concretely, by making sure they are the real beneficiaries of aid and funding. There are talented young leaders, talented young women. We can build and invest in them urgently.

The networking and coordination, which we have built in the last 20 years, needs to be strengthened. Women's solidarity and networks have proved to help women.

We can build on what we have done in the past, with clearly defined but simple mutual accountability, and monitoring both sides to really see.

As a woman leader yourself, what is your message to the women of Afghanistan now?

I am broken inside. But the reason that I'm saying is this is because I really want everyone to stand because if we don't stand, no one will stand for us. We have to do it ourselves.

As a woman activist, which is a part of my blood, I have a message. We need more communication within us. No matter if we are inside or outside of Afghanistan. If we are American, Australian, British, Canadian, but we are women. And we always have problems and challenges. We all know each others, even if we do not want to show, but we know each others problems. We have to, the women have to be the ones who design our own solutions. Everywhere in the world.

For individuals watching the situation from abroad, what can they do to support women and girls most right now?

I think the first thing is attention. Real attention. People message you, and then they vanish. Keep reaching out, keep listening and keep paying attention. The first thing I’m asking my sisters and my friends around the world is to respond and communicate with the women you know. Listen to them and try to support and coordinate.

Even the messages I get that don’t offer money or physical resources are giving me high morale. Someone is thinking of you. There may be many, many, women who mostly need us and our one message can change their whole situation. I am constantly in touch with other women. Healing. What we need is mental healing and solidarity.