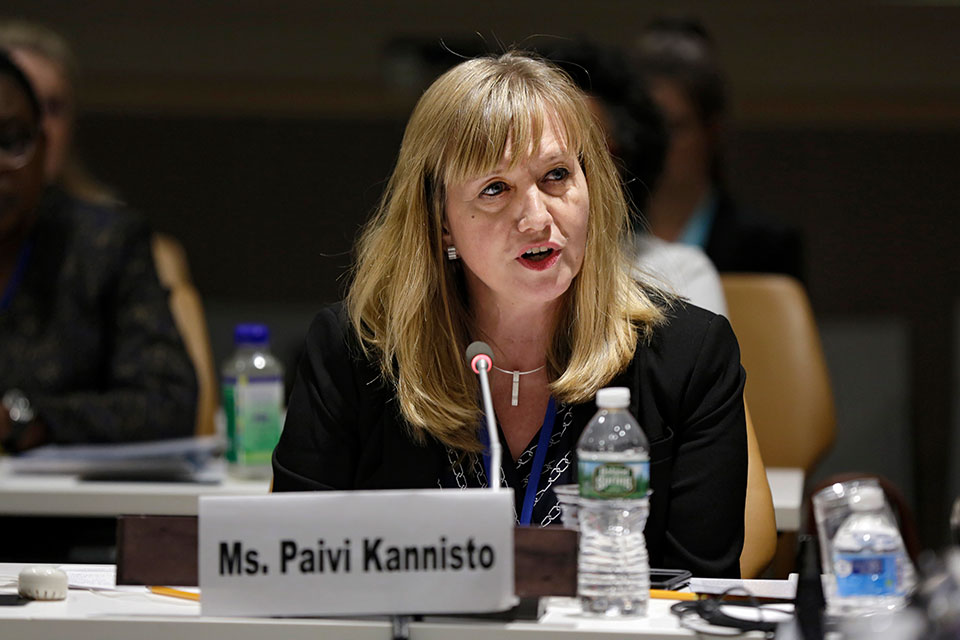 Paivi Kannisto is the Chief of Peace and Security at UN Women with more than two decades of experience in international development and peace and security. As the UN Security Council prepares to meet for the Open Debate on women, peace and security on 21 October, Kannisto explains the state of progress and the need to invest in local women peacebuilders. The UN Secretary-General’s 2021 report on women, peace, and security shows that in the wake of the COVID-19 crisis and ongoing political and humanitarian crises, how countries choose to invest will have long-term impact on economic recovery, as well as peace and stability. The report calls for reversing the upward trajectory in military spending, which reached almost USD 2 trillion in 2020, and increasing investment in local women’s peacebuilding, education, health and other public programmes. UN Women works closely with the UN Secretary-General’s office for reporting on the women, peace and security agenda.

Last year we marked the 20th anniversary of Security Council resolution 1325. As the UN Security Council meets on 21 October to discuss how to advance the women, peace and security agenda, what is the state of progress and the key challenges?

When you look at the numbers, you see that the percentage of women at UN-brokered peace negotiations is 23 percent, and that approximately 19 percent of parliamentary seats and 23 percent of public administration positions are held by women. These numbers have been slowly inching up. But as we said repeatedly at this year’s Generation Equality Forum, one-quarter is not equality. Equality is one-half. The Covid-19 pandemic and the deterioration of the security situation in many places have made matters worse: more sexual violence, more child marriage, more intimate partner violence in refugee camps, more killings of women human rights defenders, and too few examples of justice or change.

Why is curbing military spending an important strategy for the women’s movement for peace? 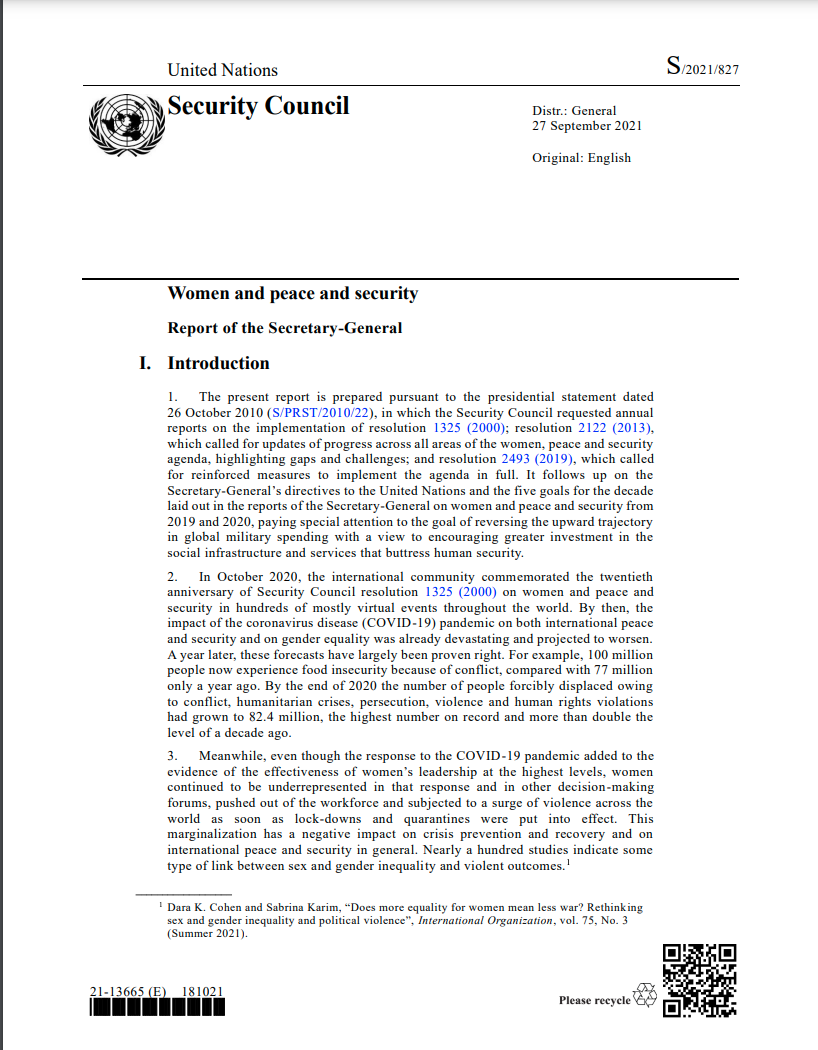 The UN Secretary-General’s 2021 report on women, peace, and security

This has been a common thread through more than a century of feminist international mobilization, because their main agenda has always been to prevent conflict.

We know that military spending fuels conflict and investing in gender equality sustains peace. And yet, even in the middle of a pandemic and contraction of the global economy, military spending continues to rise. For instance, bilateral aid supporting women’s civil society organizations in fragile or conflict-affected countries amounted to only USD 179 million in 2019, and many organizations struggled to stay afloat during the pandemic. In contrast, global military spending increased by 2.6 per cent, reaching almost USD 2 trillion in 2020.

This is why the UN Secretary-General’s 2021 report on women, peace, and security calls for reducing military spending and increasing investment in peacebuilding, education, health and other public programmes.

What kinds of investment could help secure lasting peace and peaceful transitions, and how?

Several studies have shown that women’s participation in peace negotiations makes peace agreements likelier to succeed. But beyond formal peace talks, there is growing evidence that investing in women-led bottom-up peacebuilding can yield huge dividends. Women may not be visible in the halls of government or commanding armed groups, but they are very visible at the grassroots level, mediating between families and communities, negotiating the release of detainees or for humanitarian access. They facilitate the demobilization and reintegration of combatants, build trust and social cohesion, and conduct community violence reduction initiatives. But their efforts are often unrecognized, and they have little or no funding. We need to support these local peacebuilding efforts to forge lasting peace.

Local women peacebuilders are our key partners in all the conflict-affected countries where UN Women works. We help them mobilize international networks, provide a megaphone to amplify their message, and fund their initiatives. Unfortunately, the structure of global aid makes it hard for local women peacebuilders and grassroots organizations to access funds. We collaborated with civil society and governments to create the Women’s Peace and Humanitarian Fund to address this gap, and the Fund has been able to support more than 400 local organizations in the last five years.

The Fund’s new goal is to support 1,000 women leaders in 1,000 crisis-affected communities, and it’s working to also support emergency protection measures for women peacebuilders and human rights defenders at imminent risk, given the rising trend of reprisals against them.

This year, several crises are unfolding at the same time, and putting peace and security at risk – from climate-related humanitarian disasters to political crises and conflict. How is the global Compact on Women Peace and Security and Humanitarian Action forged at the Generation Equality Forum helping?

The Compact on Women Peace and Security and Humanitarian Action has now been signed by 153 stakeholders that includes governments, UN entities, regional and civil society organizations, academic institutions and private sector companies. It is very timely, given the dramatic deterioration of peace and the backsliding of women’s rights in many parts of the world, including in Afghanistan, Yemen and Haiti.At the most important summit on gender equality in 26 years, the Generation Equality Forum, countries doubled down on their commitments to gender equality, pledged nearly USD 40 billion, and launched the global Compact.

To sign the Compact, governments may choose to commit to only support, politically or financially, peace processes and political dialogues that include women, or earmark a certain share of their aid to countries in crisis, specifically to advance gender equality or to protect women human rights defenders. They can support practical measures, such as facilitating and expediting the approval of applications for asylum, temporary relocation, or protected status for women human rights defenders who are trying to escape gender-based persecution. It’s time to leverage and activate the commitments made at the Generation Equality Forum to support women’s peacebuilding efforts.