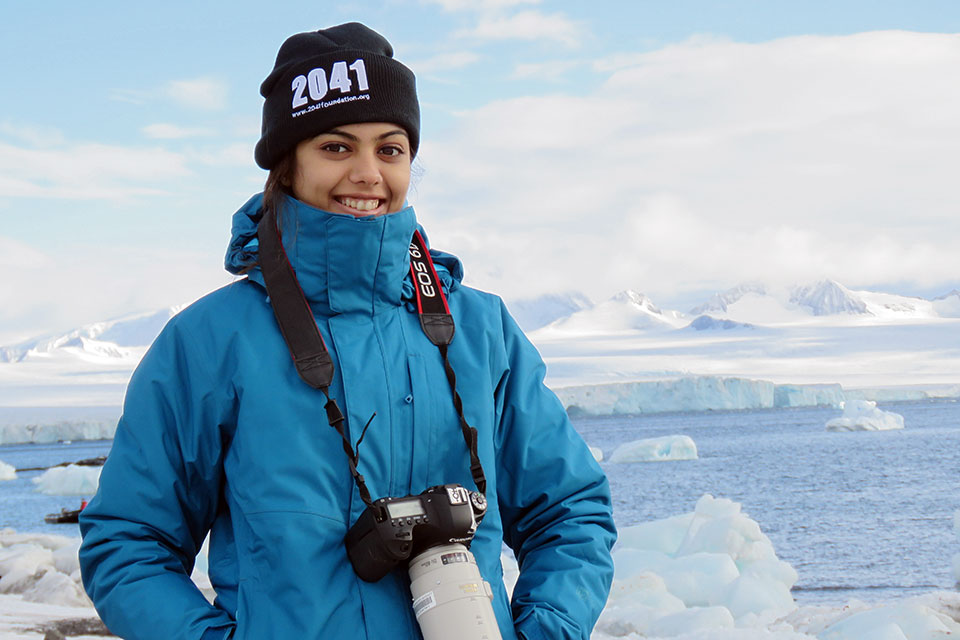 I am Generation Equality because

Today’s youth are tomorrow’s future, and I believe I have some responsibility to contribute to that future.

Three things you can do to fight climate change:

For a long time, women were expected to simply obey, listen and follow. Although there has been progression over the years, gender prejudice is still rampant. I realized this inequality the day my parents and I were ridiculed for my accepting the opportunity to embark on the Antarctic expedition. I was 18 years old at the time. My parents were told, ‘she is not a boy, what good will a tiny Indian girl do there? How is she going to save Antarctica from melting, just save the money for her wedding.’

I had nervous breakdowns, I felt like giving up on a couple occasions, but [the challenge] pushed me harder. It became more than a personal struggle, a battle for gender equality.

I embarked on the journey to Antarctica in 2016, with like-minded people from across the world who had come together to find solutions to fight climate change. I was the youngest person to have ever done so. If I could do that, anybody can.

Climate change is one of the foremost emergencies of our time.

“It will soon become impossible to undo the damage.”

The past 20 years have been the warmest on record, sea levels have risen by 1 cm in the past 10 years, more than one million species are at risk of extinction, and Antarctica is melting ten times faster than predicted ­– all because of human ignorance.

Global warming is more than a term we were introduced to in textbooks a decade ago; it is a crisis.

We have come to a point wherein, if we don’t act fast to try to curb it, it will soon become impossible to undo the damage.

Global organizations and governments are making policies, but what good is that if we, the people, don’t take a step forward?

If I can get even one person to think the way that I do, that would be a win, because little drops make the mighty ocean.

I was 14 when I met Robert Swan, the first person in history to walk to both the North and South poles, during a research project.

We visited a tetra tech recycling plant and learnt that tetra pack cartons (made of aluminium, polyethylene and paper) were 100 percent recyclable and disposing them directly into the soil could make it completely infertile. I decided to start an initiative called the ‘Recycle Army’ and spoke about the importance of recycling, saving water and using just the right amount of resources, in my neighbourhood.

Youth advocates are well informed and up-to-date on global issues. We are confident in our beliefs and positive that the causes we are fighting for will ensure a better future. We come up with fresh ideas and are great at multitasking. It is important that [people of all ages and] all genders are able to contribute solutions to the global climate crisis and consciously find ways to live more sustainably.

Avani Awasthee, 23, represented India on the International Antarctic Expedition in 2016.She was ‘Miss Tourism Metropolitan India’ in 2019 and worked with eco-friendly and sustainable brands.

Related News
08/06/2022
A comprehensive approach to ending violence against women in rural spaces in India
08/10/2021
I am Generation Equality: Nidhi Mayurika, young innovator and space enthusiast
27/09/2021
From where I stand: “I want young Dalit women to be part of a society where they can voice their opinions and… dream of a life more than just basic”
16/09/2021
I am Generation Equality: Madhura Das Gupta, business leader and advocate for women’s economic justice and rights
27/07/2021
Your questions answered: Women and COVID-19 in India
END_OF_DOCUMENT_TOKEN_TO_BE_REPLACED