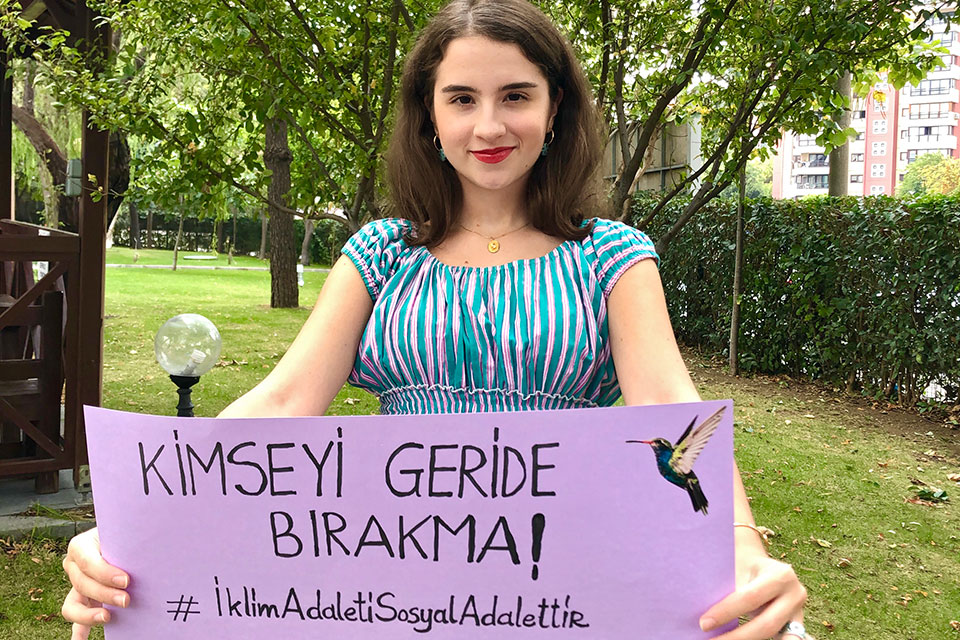 I am Generation Equality Because…

It is important to recognize the interconnectedness of all our goals. One person cannot change the world, we can come together and fight for the things we believe in, in solidarity.

Three steps you can take for climate justice:

Climate justice affects everyone, we must raise the voices of the marginalized people who are directly facing injustice. Bringing the local [experiences and perspectives] to the international level is very important.

We had gone to Lousanne for the Fridays for Future Europe Conference in 2019. I had the chance to meet Greta Thunberg there and she showed her support to a local strike, staged against a Canadian company that held a license to mine gold in the region, by saying “Kaz Dağları Hepimizin”, meaning, “Mount Ida is for All of Us”. I shared a video with Greta’s statement with the Turkish environmental activists for motivation. The aim of the strike was to stop mining activities and prevent the deforestation of the region. It is very important to connect local efforts with international efforts to tackle crises together. Climate change is not a national issue, it is an international crisis.

How it all started

I was in high school when I started as a climate activist. It began with Fridays for Future, the movement that Greta Thunberg started. On 20 September 2019, together with other young activists, we organized a huge strike in the Kadıköy district and simultaneous strikes were held all around Turkey; with Istanbul being the largest. It was part of a global climate strike to mobilize for climate justice. We demanded action to address climate change.

Gen-Z cares about climate justice. Personally, I am a part of different NGOs as well, “Yuvam Dünya” (Earth: My Home) is one of them. We’re working with the Ministry of Education to ensure that climate crisis becomes part of the curriculum for both primary and middle schools. We need to start with young people to change things.

I am also a part of Permatürk (Turkish Permaculture Foundation) and serve on the advisory board, prepare.

Act to address the ecological crisis

My first step would be to push for the implementation of the Paris Climate Agreement in Turkey.

We as human beings are causing extinction of other species. This disappoints me, I want to work on this. We are interconnected with others in nature, our [well-being] depends on the survival of other species. The problem is that we distance ourselves from nature so much that we forget we are a part of it.

We must use this power and our voice

“Our daily choices matter, and our choices change everything.”

Aristotle says, “We are all political animals”. We must use this power.

We all have a voice, when it comes to voting, expressing our demands, showing what we care about. We need to use it. Our daily choices matter, and our choices change everything – the politicians, the ideals of companies, and the directions they take.

We can change them.

As citizens, we all have a voice. We need to communicate our needs. Whether it be through protests, speeches, meetings, or with local municipalities.

This is the action that all citizens can take.

We need to pay attention to gender issues in climate justice

It is harder for people living in rural areas as opposed to those in cities. It is very hard for women who directly work in agriculture as the primary source of income to adapt to all the radical changes that occur because of climate crisis.

Women and girls are deeply affected because when climate related immigration occurs, it affects women more, because of both the physical and mental abuses that happen along the way. Immigration is a huge issue related to climate justice.

Selin Gören, is a 19-year old climate activist and eco entrepreneur. As a student, she studies climate change communication, and has been working with movements including Fridays for Future, Extinction Rebellion and Youth for Climate since 2019.

Related News
20/04/2021
From where I stand: “With smart and efficient use of natural resources, we can alleviate climate change”
08/12/2015
New flagship programme on energy launched at COP 21
07/12/2015
Executive Director attends COP21 Women’s Caucus
07/12/2015
“This agreement must make sure that the women have a better deal”—Executive Director at COP 21
04/12/2015
In Paris, Lakshmi Puri stresses women’s role in climate action and decision-making
END_OF_DOCUMENT_TOKEN_TO_BE_REPLACED