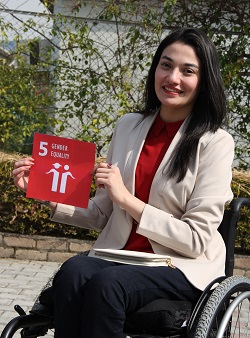 UN Women appointed Muniba Mazari, 28, as Pakistan’s first National Ambassador during an event in Islamabad to mark the end of the 16 Days of Activism against Gender-Based Violence in December 2015.

When she was 21 years old, Ms. Mazari was left bound to a wheelchair due to a spinal cord injury following a car accident. Nine years ago, while laying in a hospital bed with a broken body, half-paralyzed and barely able to move her hands, Ms. Mazari began to paint in order to distract herself. She says it was painting that kept her alive. Despite the immense pain she has endured because of the accident, she considers her pain “beautiful” since it allows her to connect with others also in pain. Ms. Mazari’s life-changing experience has turned her into an activist, encouraging women and girls that have experienced discrimination or violence to not fear or fight the pain.

It was Ms. Mazari’s motivational speech in November 2014 at a TEDx event organized in Islamabad that propelled her into the public eye. Her speech contained a message of hope, urging people not to give up on life. Her appeal transcends to different generations and represents the voice of women, men, girls and boys across Pakistan on important issues of gender inequality and discrimination.

Ms. Mazari also supports the well-being of under-privileged children and their education. She has spoken out across Pakistan on important issues including gender inequalities and discrimination. She was also named as one of BBC’s 100 Women for 2015.

Statement: Protect the rights of all Afghans
UN Women statement on women’s rights in Iran
Speech: Taking stronger action to keep the promises of Generation Equality
UN Women statement on the death of Mahsa Amini
Statement: ‘Meticulously constructed policies of inequality’ – Afghanistan one year on
END_OF_DOCUMENT_TOKEN_TO_BE_REPLACED