The fifty-ninth session of the Commission on the Status of Women took place at United Nations Headquarters in New York from 9 to 20 March 2015. Representatives of Member States , UN entities, and ECOSOC-accredited non-governmental organizations (NGOs)  from all regions of the world attended the session.

The main focus of the session was on the Beijing Declaration and Platform for Action, including current challenges that affect its implementation and the achievement of gender equality and the empowerment of women. The Commission undertook a review of progress made in the implementation of the Beijing Declaration and Platform for Action, 20 years after its adoption at the Fourth World Conference on Women in 1995. The review (Beijing+20) also included the outcomes of the 23rd special session of the General Assembly, the first five-year assessment conducted after the adoption of the Platform for Action, which highlighted further actions and initiatives.

The session also addressed opportunities for achieving gender equality and the empowerment of women in the post-2015 development agenda.

Organization of the session

The Political Declaration adopted on the occasion of the 20th anniversary of the Fourth World Conference on Women is available here:[ Arabic | Chinese | English | French | Russian | Spanish ]
Extracted from: E/2015/27

The resolution on “Future organization and methods of work of the Commission on the Status of Women” is available here:
E/RES/2015/6 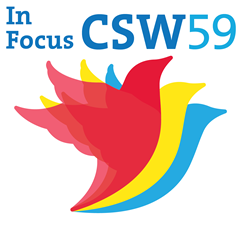 From 9-20 March 2015, the 59th session of the Commission on the Status of Women will review progress and remaining challenges in implementing the landmark Beijing Declaration and Platform for Action, 20 years on. More