Germany pledges to expand support for women’s professional skills in developing countries, and require corporate boards at home to apply a 30 per cent quota for women (updated) 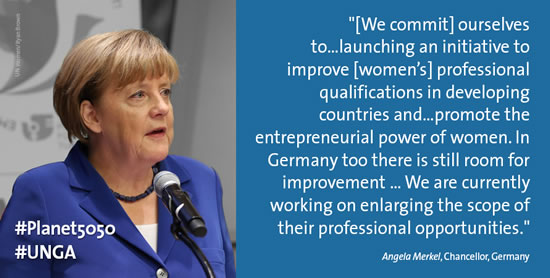 Calling for women to play a more prominent role in politics, the economy and society, Germany commits to launching an initiative to bolster women’s professional qualifications in developing countries and promote women’s entrepreneurial empowerment.

It recognizes that there is still room for improvement in Germany, and has taken steps forward by enhancing options for child care and passing a law on women in leadership positions.

Germany had previously committed that in 2016, stock-listed and fully co-determined companies will be required to reserve at least 30 per cent of supervisory seats on their boards for women.

Speaking at the Global Leaders’ Meeting on 27 September 2015, Chancellor Angela Merkel said: “We all committed ourselves in 1995 to implement the Beijing Platform for Action. Now we are making a new commitment with Sustainable Development Goal 5. Commitments are good. Action is better. Let us take action!" [ Previous commitment ]

Since Germany’s commitment to boost women’s participation in boards and their entrepreneurial empowerment, under the Act on Equal Participation of Women and Men in Leadership Positions in the Private and the Public Sector, 3,500 enterprises are obliged to establish targets for increasing the proportion of women on their boards and at several management levels. Since 1 January 2016, a gender quota of 30 per cent has been in place for the supervisory boards of businesses that are listed and are subject to parity-based co-determination. Pay discrimination is already forbidden, but the Federal Government also plans to introduce new transparency regulations.

Germany supports developing countries to foster women’s role in politics, the economy and society. Apart from supporting the Women’s Empowerment Principles, Germany’s commitment has been further strengthened by the Development Policy Action Plan on Gender Equality 2016–2020, which includes, among other things, the economic empowerment of women as well as their participation, voice and leadership as priority themes. [ Full update ]