Sexual violence against women and girls is widespread in conflict and used as a war tactic. Reports from the Democratic Republic of the Congo on the extent of conflict-related sexual violence range from 18 to 40 per cent among women and girls and between 4 and 24 per cent among men and boys. Domestic violence, trafficking, child marriage, are also exacerbated during conflict.

The UN has adopted international commitments to address gender-related violence in conflict, including UN Security Council resolution 1960, which provides an accountability system for conflict-related sexual violence; stipulates coordinated and timely collection of information on such violence; and calls for countries to establish specific time-bound commitments. Meanwhile, Security Council resolution 2122 sets out the need for humanitarian aid to ensure access to sexual and reproductive health services, including for pregnancies resulting from rape.

UN Women’s programmes on women, peace and security support women’s engagement in all aspects of peacebuilding, towards more inclusive, egalitarian societies that can end gender discrimination and resolve conflicts without violence. We train peacekeepers to detect, address and stop conflict-related sexual violence. Other initiatives back justice and security institutions that protect women and girls from violence and discrimination and public services that are fully responsive to women’s needs.

In the words of Evelyn Amony: “I was forced to become one of his 27 'wives'” 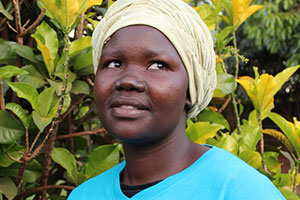 At 12 years old, Evelyn Amony was abducted by the Ugandan rebel group known as the Lord’s Resistance Army (LRA), which for three decades has committed a range of atrocities including the abduction of children, rape, killing, maiming and sexual slavery. Today, Evelyn is Chair of the Women’s Advocacy Network, comprised of over 400 formerly abducted and war-affected Ugandan women. With funding from UN Women, the Network encouraged the Ugandan Parliament to adopt a landmark resolution addressing war-affected women on 9 April 2014. 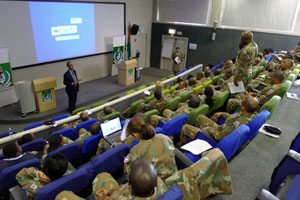 Together with the Department of Peacekeeping Operations, UN Women piloted a scenario-based training programme for UN peacekeepers that uses audio-visual tools to educate commanders about sexual violence in conflict. After watching context-setting videos, participants are presented with real-life scenarios and discuss how best to address the situation. Since April 2011, more than 500 military officers have been trained in seven of the top UN troop-contributing countries, and hundreds more have been trained in over a dozen other countries, as these trainings have been incorporated into regular courses.

What the Beijing Declaration says about Women and armed conflict