In the words of Evelyn Amony: “I was forced to become one of his 27 'wives' ”

Evelyn Amony was abducted by the Ugandan rebel group known as the Lord’s Resistance Army (LRA) when she was only 12 years old. For nearly three decades, this rebel group has committed a range of atrocities including the abduction of children, rape, killing, maiming and sexual slavery. Today Evelyn is Chair of the Women’s Advocacy Network, comprised of over 400 formerly abducted and war-affected women, many of whom are speaking out and effectively advocating for gender justice in Uganda. In her own words, she tells her story… 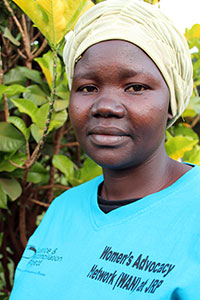 Evelyn Amony advocates for gender justice and for all women to be treated equally, irrespective of their past. Photo: Theresia Thylin/UN Trust Fund

I was abducted by the LRA when I was only 12 years old. One of the really bad things that happen to young girls in the LRA is that they are forced to have sex with the commanders even though they are not ready for such a relationship. I was forced to stay with the LRA leader Joseph Kony [who together with his top commanders is indicted for war crimes and crimes against humanity by the International Criminal Court].

When I was there, I was forced to become one of his 27 “wives”. I gave birth to three children in captivity and the worst thing that happened to me during my 11 years in the LRA was when one of my children went missing in the cross-fire in February 2004. I have searched for my daughter in both Uganda and South Sudan but have been unable to find her and I am unaware of her fate. One year after, during another exchange of fire, I managed to escape with my two other children. Today, I live with my surviving children and have also adopted two of Kony’s other children after their mother died. After I escaped, I stayed at a reception centre and the young children that had lost their mother knew me. When I was about to leave the centre the children started crying and it was painful for me to leave them so I decided to adopt them. Today, I also have two children with my new partner.

Formerly abducted women and their children born in captivity face a lot of stigma and discrimination when we return from captivity. I’m originally from Atiak, a town that was marked by a large massacre.

When I came back, the wife of one of my uncles showed me the graves of all the family members that have been killed.  She looked at me and said, ‘Kony’s children are still moving but our children are all buried’. That made me fear for the security of my children if we were to live in Atiak.

The Women’s Advocacy Network, which is an initiative of the Justice and Reconciliation Project has managed to reach several war-affected communities and succeeded in attracting the attention of the Ugandan Parliament. With support of partners of the UN Trust Fund to End Violence against Women such as the International Center for Transitional Justice, Women’s Initiatives for Gender Justice and other partners like Gulu District Local Government, the Network presented a petition to the local government and subsequently to the national Parliament. Evelyn was present when the Parliament of Uganda debated the petition and on 9 April 2014 the Parliament adopted a landmark resolution calling for the reparations for war-affected women and other victims of the LRA.

I joined together with women in the same situation to seek justice and reconciliation for war-affected women and our communities. Today, I am the Chair of the Women’s Advocacy Network, a network comprised of over 400 formerly abducted and war-affected women.

One of the achievements of the network is that we have presented a petition seeking the intervention of the Parliament in addressing issues and challenges faced by war-affected women in the Acholi sub-region. Earlier this month, I was there when the Parliament of Uganda debated the petition and thereafter adopted a resolution calling for reparations for war-affected women and other victims of the LRA. I felt so happy, and I was so happy that Members of Parliament across the political spectrum all supported the petition. It was something I had longed for!

The Government has not given anything to us, the formerly abducted women. Many of the men who have left the LRA have been integrated into the army and are receiving a salary but we, the women who were abducted by these men, have not received anything until now.

I hope that the resolution will generate an acknowledgement of the suffering of the women and that the Government will issue an apology. The Women’s Advocacy Network also calls on the Government to provide support to the women affected by war. For me personally, the most important thing would be if the Government could pay the school fees for my children.

As the Chair of the Woman’s Advocacy Network, I now have confidence to continue to speak out and to move on. I went through a lot of pain but I have a feeling that my life will change. I have already reached another level.

As transitional justice measures in Uganda -including the adoption of a transitional justice policy- are still in the making, we, the women formerly abducted by the LRA, have become an important voice in the struggle for gender justice. Every voice matters. We can all contribute as women at the grass-roots are playing our part in overcoming the challenges we continue to face.

This work is supported by UN Women, through funding from its core budget as well as programme funds from the Department for International Development and the Government of Australia and grants to civil society from the UN Trust Fund to End Violence against Women.

Related News
23/04/2014
Ugandan Parliament adopts resolution to address needs of war-affected women
24/06/2013
Demanding Justice for Sexual and Gender-Based Violence Perpetrated by the Khmer Rouge
17/03/2012
As reparations are considered in Northern Uganda, ways are sought to equally include female survivors
23/11/2011
Raising our Voices to End Violence against Women
27/05/2020
On the front lines of COVID-19, women’s organizations provide vital services as first responders as violence against women spikes
END_OF_DOCUMENT_TOKEN_TO_BE_REPLACED