As the United Nations Security Council adopts a new resolution on conflict-related sexual violence today, we detail the efforts of a UN Trust Fund-supported programme that works to ensure that sexual and gender-based violence perpetrated by the Khmer Rouge during the 1974-1979 genocide in Cambodia is never forgotten.

“I buried my Khmer Rouge experiences for so long and I didn’t want to talk about them. But today, I hear and see them again. I feel angry, but I know that it is good to release these feelings. This can help the young generation accept the truth that this dark regime truly happened in Cambodia.”

This anonymous testimony by a survivor of sexual violence illustrates the deep scars left by the Khmer Rouge regime, which claimed the lives of 1.7 million Cambodians from 1975 to 1979.

Gender-based crimes perpetrated by the regime remained invisible for decades, but the veil is beginning to fall. It is now acknowledged that a still-unknown number of women were raped and subjected to forced marriages and that refusal to comply often resulted in imprisonment, torture or death. While the impact of these atrocities reverberates to this day, survivors seemed destined to a life of silence and shame. In 2006, the Government established the Extraordinary Chambers in the Courts of Cambodia (ECCC) with a mandate to prosecute Khmer Rouge officials involved in gross human rights violations.

As part of its efforts to specifically address gender-based violence in conflict, post-conflict, and transitional settings, the United Nations Trust Fund to End Violence against Women is supporting a programme implemented by the ECCC’s Victims Support Section (VSS) that is trying to ensure meaningful, sustained and informed participation of gender-based violence survivors in criminal proceedings. The initiative encourages public dialogue on sexual violence during the Khmer Rouge regime and strengthens the ECCC’s ability to handle gender-based claims by providing specialized judicial training. 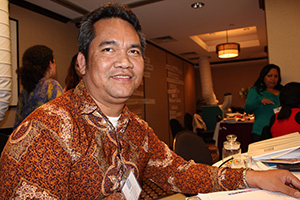 Im Sophea, Chief of the Victims Support Section of the Extraordinary Chambers in the Courts of Cambodia, participates in the UN Trust Fund’s Capacity Development Workshop for new grantees in May 2013 in New York.

Sophea Im is the director of the VSS and a survivor of the genocide who has fought tirelessly for justice. He is committed to ensuring that the voices of gender-based violence survivors in Cambodia are included in a range of transitional justice mechanisms including truth-seeking, rehabilitation and reparations. He recalls that to kick off the initiative, the VSS reached out to genocide survivors, including gender violence survivors, through a public call, which resulted in over 3850 people being admitted as potential claimants for crimes against humanity and genocide.

Investigating judges declared 674 of those cases as admissible to Court proceedings, some of them on the basis of gender-based violence crimes. Initial hearings for the still-ongoing second prosecution case, known as Case 002, originally included claims related to alleged forced marriage. However, the inclusion of gender-based violence in this trial suffered a setback this year as the case was divided into a series of separate ‘mini’ trials. Forced marriages will be tentatively included in the final ‘mini’ trial, which means that many years might pass before these crimes are actually addressed and that many of the survivors will not be alive to testify in Court.

Despite this decision, which has been deemed contentious by international civil society and academics, the VSS has not been deterred. This year, in partnership with the Cambodian Defenders Project, the VSS created the first online information platform on gender-based violence during the Khmer Rouge regime. The VSS continues to provide psychosocial and legal education and support to survivors.

The VSS is also raising public awareness of gender-based crimes during the genocide through national radio programmes, community forums, victim support groups and interactive theatre. These efforts to address sexual violence during the Khmer Rouge regime allow survivors to voice their experiences and concerns and to teach their communities about the impacts of genocide.

In partnership with national and international human rights organizations, the VSS co-sponsored two regional Women’s Hearings in 2011 and 2012, in which survivors of sexual violence from Bangladesh, Nepal and Timor Leste were also asked to participate and share their own conflict and post-conflict experiences. The Women’s Hearings are a significant, albeit non-judicial, space for truth-telling. The ECCC has expressed interest in the testimonies, raising hopes that they could serve as evidence in future trials. Whether or not the hearings result in the prosecution of perpetrators, they still serve an important purpose: survivors can safely testify on their experiences and collectively advocate for gender justice. 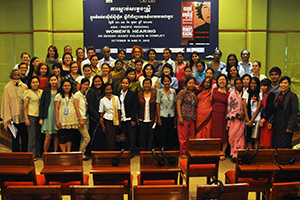 Survivors of sexual violence from Cambodia, Timor Leste and Bangladesh wrap up the October 2012 Women’s Hearings at Phnom Penh, Cambodia. This event was co-sponsored by the Victims Support Section of the Extraordinary Chambers in the Courts of Cambodia.

In reference to the hearings, Mr. Im mentions that “We all suffered … and while the damage and suffering to which [gender-based violence victims] were subjected is irreparable, the Women’s Hearings grant symbolic reparations and give victims the opportunity to have a collective voice.”

The VSS has also invited survivors to participate in Testimonial Therapy, a culturally sensitive, victim-based approach to individually and collectively address and treat trauma. Survivors transform their private suffering into a public issue to be heard by the wider community and thus symbolically redressed. In the words of one survivor of gender-based violence, “Before, my life story had not been acknowledged; no one knew about the difficulties in my life. But because of [Testimonial Therapy] my life’s story has been shared and recognized.”

The VSS is leading a long, difficult process that gives survivors the opportunity to mourn, share their grief, reach out to each other and, most importantly, carve out a public space for their testimonies to be heard. Ultimately, the VSS is ensuring that the memory of genocide does not ignore the experiences of thousands of victims of gender-based violence.

Watch “Women’s Hearings 2012”, a short film short film by Sopheak Sao, produced by the Cambodian Defenders Project in partnership with the VSS.

Information Platform for Gender-based Crimes during the Khmer Rouge

UN Women’s efforts to train and rapidly deploy investigators of sexual and gender crimes to justice mechanisms, including international courts

Related News
19/10/2018
Sepur Zarco case: The Guatemalan women who rose for justice in a war-torn nation
08/05/2014
In the words of Evelyn Amony: “I was forced to become one of his 27 'wives' ”
23/04/2014
Ugandan Parliament adopts resolution to address needs of war-affected women
11/12/2014
Around the world, women and men of all ages “orange their hoods” to end violence
07/10/2014
In India’s garment factories, stitching clothes and a culture of non-violence
END_OF_DOCUMENT_TOKEN_TO_BE_REPLACED