Years of advocacy by women’s rights groups including those monitoring justice for women with disabilities in northern Uganda pays off.

“You are illiterate, you are deaf, you are blind, you are mute, and how can you then get information to empower you to demand for your rights?” says Irene, the treasurer of the Gulu Union of Women with Disabilities (GUWODU), an NGO in the town of Gulu, in Uganda’s Northern region, supported by UN Women. Irene’s leg was amputated after she stepped on a landmine during the 20-year conflict between the Government of Uganda and the Lord’s Resistance Army (1986-2006).

“We died in large numbers during the war,” says Teddy Aciro, Chair of GUWODU, drawing attention to the impact of war in Uganda’s Northern region on people with disabilities, especially disabled mothers. “See, when the rebels would come, everybody would run into hiding; but as a disabled mother, you try to look around for your children to protect them from the rebels. Remember, you either do not have eyes to see, or legs to run, so the rebels find you in the process. They burn you in the house.” 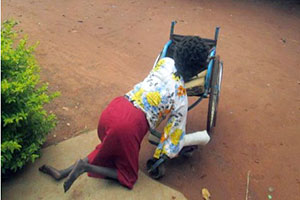 Apiyo Anna is a disabled woman from Gulu district whose was evicted from her late husband’s land. Her case was received by the Gulu Union of Women with Disabilities in 2013. Photo courtesy of GUWODU

With support from UN Women and national partner Center for Women in Governance (CEWIGO), Teddy and her team created the Human Rights Disability Platform, which ensures that local authorities including the police, district magistrates and army officials meet monthly to receive reports of cases against disabled women.

“We use this opportunity to monitor implementation of justice for women with disabilities. As a result of these disability forums, we have since seen greater cooperation from the chief magistrate and other judicial officers. Every time a case file indicates that it is concerning a person with disabilities, the magistrate comes to the ground-floor courtroom to hear it and all the cases are heard quickly.”

Progress towards justice and reparations

Justice for conflict-affected women in Uganda took a big step forward as the Parliament unanimously passed a resolution calling for establishment of special programmes for people affected by the LRA war in northern Uganda. The resolution, adopted on 9 April 2014, urges the Government of Uganda to establish a gender-sensitive reparations fund and offer reparations to women and men that were affected by the Lord’s Resistance Army rebellion. Members of Parliament noted that the 20-year insurgency in northern Uganda affected mostly women and girls who were subjected to rape, violence and sexual exploitation. 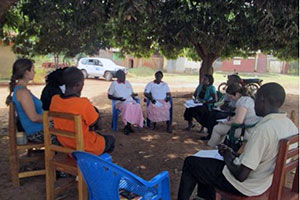 A team from UN Women meets with the Gulu Union of Women with Disabilities during a visit by the Global Manager of the UN Women Peace and Security Programme. The Union is a women-led grassroots organization that has been a beneficiary of the programme since 2011. Photo courtesy of GUWODU.

The resolution follows years of advocacy with the first-ever meeting to discuss the design of a victim-centred and gender-just reparations programme held in Kampala in February 2012, co-hosted by UN Women, the Office of the High Commissioner for Human Rights and the Uganda Human Rights Commission. The meeting which brought together government, UN, donor, and civil society representatives including from women’s rights and victims groups contributed significantly in securing the Government’s public commitment to moving forward with a reparations programme. That commitment has been consolidated in this resolution which followed two petitions to Parliament by formerly abducted women and other persons affected by the war, seeking intervention from the Government.

The petition was spearheaded by the Women’s Advocacy Network (WAN), with support from two civil society organizations who are grantees of the UN Trust Fund to End Violence against Women, namely the International Centre for Transitional Justice (ICTJ) and the Women's Initiatives for Gender Justice (WIGJ). WAN, an initiative of the Justice and Reconciliation Project, is a network comprised of over 300 formerly abducted and war-affected women. The resolution calls on the Government to closely monitor recovery, rehabilitation and integration challenges faced by the LRA war victims and communities in Uganda’s Northern region; increase development assistance and investments directly to communities affected by the war; and recommends that the Government should prioritize livelihoods, healthcare, skills training and education for women and child survivors.

Teddy, Irene and their colleagues are survivors who have turned their challenging circumstances into an opportunity to mobilize for the rights and dignity of others. They hope the reparations process will catalyze similar transformations for many more war-affected women and their children in northern Uganda.

“UN Women welcomes this development and encourages linking this process to broader justice and accountability mechanisms such as a truth seeking body that incorporates redress for human rights violations suffered by all conflict-affected individuals and communities,” said Hodan Addou, Country Representative of Uganda, UN Women.

This work is supported by UN Women, through funding from its core budget as well as programme funds from the Department for International Development and the Government of Australia and grants to civil society from the UN Trust Fund to End Violence against Women.

Related News
08/05/2014
In the words of Evelyn Amony: “I was forced to become one of his 27 'wives' ”
24/06/2013
Demanding Justice for Sexual and Gender-Based Violence Perpetrated by the Khmer Rouge
17/03/2012
As reparations are considered in Northern Uganda, ways are sought to equally include female survivors
08/07/2019
Statement by UN Women Executive Director Phumzile Mlambo-Ngcuka on the conviction of Bosco Ntaganda by the International Criminal Court
19/10/2018
Sepur Zarco case: The Guatemalan women who rose for justice in a war-torn nation
END_OF_DOCUMENT_TOKEN_TO_BE_REPLACED