In India’s garment factories, stitching clothes and a culture of non-violence

A UN Trust Fund-supported project to reduce workplace sexual harassment is training thousands of workers in 24 factories in India and Bangladesh, through peer-to-peer education. 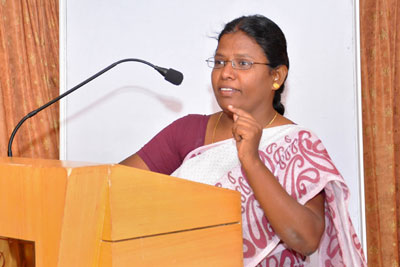 Viyakula Mary speaks at a training session aimed at reducing workplace sexual harassment, at a garment factory in Tamil Nadu. Photo courtesy of SAVE.

Viyakula Mary was born in the southern Indian state of Tamil Nadu. She was first drawn to the issue of violence against women at the age of 16, when she heard that a member of her community had faced sexual harassment but had no prospect of justice.

Mary, now 39, works as a trainer for Social Awareness and Voluntary Education, a human rights organization based in Tirupur, a city in Tamil Nadu. She leads training sessions in six garment factories across the state aimed at reducing workplace sexual harassment. Her NGO is part of an innovative project focused on the garment supply chain that is led by Netherlands-based NGO Fair Wear Foundation, in partnership with garment factories in India and Bangladesh, European clothing brands, governments, civil society organizations and trade unions in Europe and Asia.

According to studies by Fair Wear Foundation, violence against women is widespread in India’s garment factories. Violence ranges from verbal and physical abuse to sexual harassment and rape. 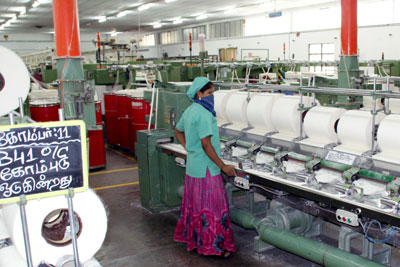 A woman garment worker on the job at a factory in Tamil Nadu, India. Photo courtesy of Fair Wear Foundation

In the past, as was the case with violence in other social spheres, women were reluctant to report abuse. Mary says that in the factories where she has worked, very few effective mechanisms exist for women workers to report any kind of grievance. Women who faced violence also have so little faith in either the police or judicial systems that if a problem persisted, rather than pursue justice, they would simply look for alternative work.

In 2013, a new law, the Sexual Harassment of Women at Workplace Act, strengthened the legal protection afforded to women working in garment factories in India. To ensure the law is being implemented, Mary believes a holistic approach, including awareness and training, is needed.

As part of the initiative, the ‘Preventing Workplace Violence’ project, which is supported by the UN Trust Fund to End Violence against Women, 3,500 workers in India and Bangladesh have received direct training in 24 factories, while another 15,000 workers have been trained via peer-to-peer education. 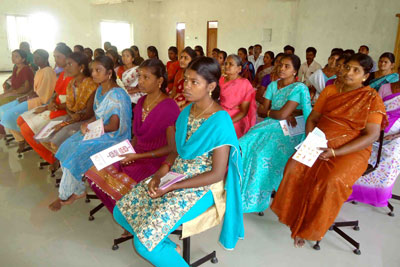 Women garment workers listen attentively at a training session where they are empowered to speak up about workplace harassment. Photo courtesy of Fair Wear Foundation

The training sessions range from three to six hours and are open to all workers, women and men, as well as management and supervisors. They’re conducted during working hours and participants earn at least minimum wages during that time.

“Management now takes quick action when a complaint is brought to them. In the past they would not even know what we were going through,” says a 31-year-old female factory worker in Tirupur.

After receiving initial training, workers are nominated to join the management and NGO representatives as part of a newly-established ‘Anti-Harassment Committees’. They meet monthly to address harassment cases. This group receives further training in communication and listening, problem-solving and decision-making to help resolve cases.

According to Juliette Li, a coordinator with Fair Wear Foundation, “lots of women accept sexual harassment because they don’t recognize it as such. And if they do, the factory manager doesn’t take it seriously. We want to create an atmosphere in which workers can talk to their bosses.” 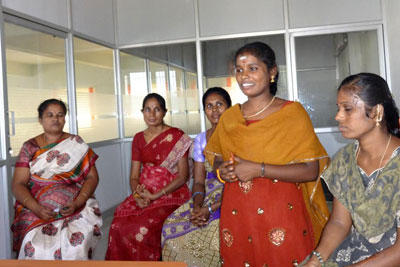 Through the training sessions, women learn to discuss issues of violence and harassment more openly with supervisors and one another. Photo courtesy of Fair Wear Foundation

The project, which started two years ago, is showing initial results. The Anti-Harassment Committees established in the factories where Mary works hear approximately four reports a month. The initiative has lifted the lid on a problem rarely spoken about and empowered workers to also address other issues including workplace discrimination and labour rights.

By participating in anti-harassment committees, women have become more vocal on the factory floor. Whereas no women held supervisory positions in any of the six factories at the beginning of the project, five women have since been promoted to such roles.

“We are empowering women more and they are getting knowledge of all these related issues,” says Mary. “We could see after the trainings that the position of women is changing.”

Related News
27/05/2020
On the front lines of COVID-19, women’s organizations provide vital services as first responders as violence against women spikes
14/11/2018
In India, women boycott weddings with child brides
09/11/2018
From where I stand: “I saved a life”
09/11/2018
From where I stand: “I feel good about the change that I have been able to bring”
08/08/2013
International Day of the World's Indigenous Peoples
END_OF_DOCUMENT_TOKEN_TO_BE_REPLACED