Preparations for the 2015 High-level Review and Global Study

In 2000, the Security Council adopted the ground-breaking resolution 1325 on Women, Peace and Security — the first to link women’s experiences of conflict to the international peace and security agenda. It focused on the disproportionate impact  of conflict on women, and called for their engagement in conflict resolution and peacebuilding. In 2015, the Security Council will convene a High-level Review to assess progress at the global, regional and national levels in implementing the resolution.

The Security Council has passed six additional resolutions on women, peace and security since the adoption of resolution 1325. Despite progress in the last 14 years, the Security Council has stressed that women’s perspectives will continue to be underrepresented in conflict prevention, resolution, protection and peacebuilding without a significant shift in how the resolution is implemented. The Secretary-General has encouraged Member States, regional organizations and United Nations entities to review existing implementation plans and targets ahead of the 2015 High-level Review.

In preparation for the 2015 High-level Review, the Secretary-General has commissioned a global study on the implementation of resolution 1325. The study will highlight examples of good practice, implementation gaps and challenges, and priorities for action. The results will be included in the Secretary-General’s annual report to the Security Council in 2015 and will be made available to all Member States. The study will also build on the findings of the two high-level studies on women, peace and security undertaken in 20021 and lessons learned from the tenth anniversary of resolution 1325 in 2010.

Read the press release on the launch of the global study here. 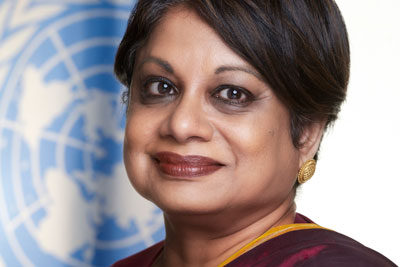 Radhika Coomaraswamy is the lead author of the Global Study on the Implementation of UNSCR 1325. Photo: UN Photo/Mark Garten

The global study on resolution 1325 will be led by Radhika Coomaraswamy, former Special Representative of the Secretary-General on Children and Armed Conflict and former Special Rapporteur on Violence against Women. Coordination of the study and related preparations for the 2015 High-level Review will be managed by a small secretariat hosted by UN Women, and supported by the UN Standing Committee on Women Peace and Security of the Inter-Agency Network on Women and Gender Equality. A high-level advisory group has been appointed to guide development of the study and provide feedback on its policy recommendations.

Extensive consultation, country visits, commissioned research, an online portal, a civil society survey and other components will feed into the study. The UN Departments for Peacekeeping and Political Affairs, UNDP and UN Women organize annual Open Days on Women, Peace and Security since 2010. These Open Days aim to bring women in conflict and post-conflict countries together to speak directly with high-level UN officials to voice concerns, and identify needs and priorities on issues relating to peace and security. This year the Open Day results will be fed into the High-level Review.