Time for Women to Shape Politics in Guatemala

The Guatemalan elections on 11 September 2011 mark an important point in the country's political life. It will be the elections with the most women candidates ever and, for the first time, voters will be predominantly female: 51 percent women and 49 percent men. The time for women to shape politics in Guatemala seems to have come. 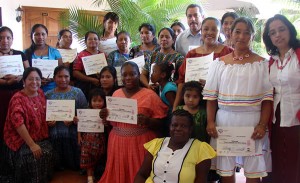 Catalina Soberanis, former President of Congress and an influential figure in the country, places active participation in political decisions high on the agenda for women in the country, along with economic independence and overcoming violence.

Ahead of the elections, UN Women launched several initiatives to support and train women candidates, with a strong emphasis on the indigenous population which, in the case of this Central American country, constitutes 40 percent of the total.

One of the most important initiatives was the intensive training course in political strategy and effective communication for indigenous women, which taught candidates how to build their own communication strategies and face a television camera to help them overcome their insecurities. At the end of the course, each participant filmed a TV spot as a candidate for election.

The National Democratic Institute (NDI), in collaboration with UN Women, published the “101 Tips for Candidates and Their Campaign Teams, a manual that provided keys to managing the election campaign, the media, the opposition and fundraising, and prepared candidates psychologically for difficult situations they might face.

Another initiative to train women leaders was the programme “Free and Informed Participation", intended to raise the awareness of indigenous women of their right to vote and to increase their political presence. Radio spots in five languages (Quiche, Cakchiquel, Mam, Q'eqchi and Spanish) encouraged indigenous women to vote. The campaign included exchanges between local journalists and indigenous candidates, to correct the stereotypes that sometimes these communities suffer in the media.

Women's representation in Guatemalan politics is still low, but the upcoming elections may provide the key to, in the words of Catalina Soberanis, “bring fresh air to politics, enrich public life with their points of view in addressing national problems, and help solve the serious problems that affect them.

Related News
01/08/2018
In the words of: “People voted for me because they wanted to see change”
08/06/2018
In the words of Sandra Moran: “Being the first openly lesbian Congresswoman in Guatemala has been a big responsibility”
18/03/2021
Mexico joins Bolivia in efforts to stop violence against women in politics
10/03/2021
This is what leadership looks like: Meet Cecilia Moyoviri Moye, an indigenous woman Senator in Bolivia’s Legislative Assembly
29/06/2020
In Guatemala, investing in indigenous women’s economic empowerment is key to building back better after COVID-19
END_OF_DOCUMENT_TOKEN_TO_BE_REPLACED