In the words of Sandra Moran: “Being the first openly lesbian Congresswoman in Guatemala has been a big responsibility” 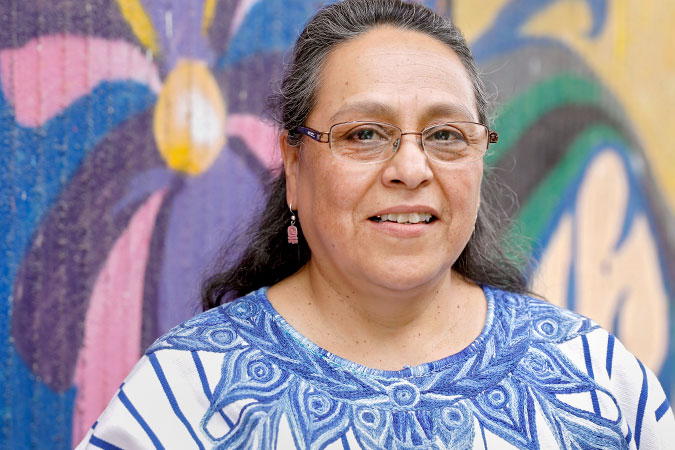 Sandra Moran is Guatemala’s first openly lesbian member of the Congress. She organized the country’s first lesbian group in 1995, and was elected in 2015. She is well-known for her vocal support for women’s rights, indigenous women’s rights and LGBT rights in Guatemala. UN Women supports the leadership of women in politics and peacebuilding in Guatemala through various initiatives, including through the flagship programme Women’s Political Empowerment and Leadership. Ms. Morán was the first woman president of the “Forum of Deputies” in Guatemala, an initiative supported by UN Women, the National Democratic Institute for International Affairs, Netherlands Institute for Multiparty Democracy and Konrad Adenauer Stiftung, and with generous funding from the Swedish International Development Cooperation Agency (SIDA). In a recent interview, Ms. Moran talks about her journey into politics and the laws she is proposing to protect women’s and LGBT rights.

Hate crimes against the lesbian, gay and transgender people are common in Guatemala. They face discrimination in health and educational services. You can be fired for being gay, your family can disinherit you. There’s a law against discrimination in Guatemala, but it’s very difficult to prove that you were fired because of your sexuality.

I was part of the first lesbian group in Guatemala in 1995 and I came out of the closet at an event. Invisibility is also a kind of violence. That’s why I decided to go public, to show the LGBT community that it is possible to be lesbian and still be in Congress. Being the first openly lesbian Congresswoman in Guatemala has been a big responsibility.

Once I was elected, I got death threats, and there were attacks on social media and public campaigns against me. My family and friends supported me, but they were afraid. In December last year, there was a discussion to form a new executive committee in Congress to deal with corruption, and in the proposal of candidates, they refused to allow me to register. I think they didn’t want someone who was defending LGBT rights or supporting abortion in the executive board. Discrimination and racism are power tactics.

Political violence against women is rarely discussed or recognized, but it exists, and there are no specific laws against it yet. We are proposing a law to address political violence, and it will include sexual harassment, discrimination, lower salaries and even the treatment of a female candidate or politician. I founded the Congresswoman Forum in September 2016, with the support of UN Women, as a space for women in the Congress to share knowledge and protect each other. The Forum has female members of the Congress from all parties—30 out of 158 members in Congress are women.

I have also proposed laws to fight violence against LGBT people and women, including one on countering obstetric violence [1]—in Guatemala this is not recognized as a form of violence yet. I have put forward a gender identity law, which would allow transgender people to choose their preferred identity and I am backing a law that protects girls who get pregnant as a result of sexual violence and allows them to seek abortion. It is the first time these laws have been presented in Congress. We are also supporting laws to facilitate the economic empowerment of women, to assist the millions of Guatemalans who are immigrating out of the country, and a law that recognizes the intellectual property rights of indigenous peoples, for the textiles they produce. Guatemala needs to recognize the collective rights of indigenous women.

None of these laws have been passed. But even if a law is not passed, presenting the law is important. It’s the first step to generate public opinion and mobilize civil society.

Fighting for LGBT and women’s rights is the essence of my life. I know I can contribute to change the situation and I won't give up. Our lifetime is short, that’s why I keep going, to make a difference.

What will a feminist Guatemala look like? A country where the public policy favors both men and women.”

[1] Obstetric violence refers to disrespect, abuse or neglectful treatment of women during childbirth. [WHO]

Related News
01/08/2018
In the words of: “People voted for me because they wanted to see change”
10/07/2018
Saving for a rainy day
09/09/2011
Time for Women to Shape Politics in Guatemala
18/03/2021
Mexico joins Bolivia in efforts to stop violence against women in politics
10/03/2021
This is what leadership looks like: Meet Cecilia Moyoviri Moye, an indigenous woman Senator in Bolivia’s Legislative Assembly
END_OF_DOCUMENT_TOKEN_TO_BE_REPLACED