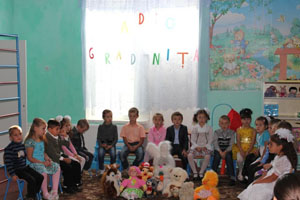 Many young children in rural Moldova are stuck at home in the long cold winter months with nowhere to go and nowhere to play. Kindergartens and pre-schools are few and even when they are in place, they are in poor shape and often badly heated.

There is little opportunity for employment, and without a centre for young children to go, there is even less chance for rural women to find jobs.

The original structure was built in 1986 and could only accommodate 44 children. The heating problem was so severe the school could not be expanded to allow more children into the school premises. This left many children in the community without any access to an education. Attendance was low as well as parents were reluctant to send their children to school with sub-standard heating.

This had an added negative impact on the parents, and the mothers in particular, who had to stay home to take care of their children with little hope of getting a job and keeping them tied to their villages. 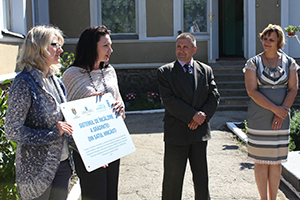 As a part of the community profiling exercise a lack of access to pre-school education among the children from poor, single-parent and many-children families with different ethnic and religious backgrounds as well as children with disabilities, was identified as one of the key human rights and gender concern in the village. Acknowledgement of the problem by the local public authorities and women and men of the community was the first step of the community mobilization.

Next, the Programme team helped in forming a community initiative group of parents and kindergarten educators to advocate for addressing the situation and including it in the Hincauti Local Socio-Economic Strategy as one of the community development priorities.

The initiative group developed a project proposal on extension and renovation of the kindergarten building. Development of the project proposal was carried out through wide consultative and participatory process and involved community women and men and representatives of local public authorities and public institutions. Once developed by the community, the proposal received a financial support of the JILDP.

The community initiative group composed of parents and teachers closely monitored the kindergarten extension throughout the whole process to make sure that all of their needs were addressed.

Now, 64 children, 37 boys and 27 girls have access to improved kindergarten facilities. With the kindergarten extension five mothers have already found jobs and many more are exploring new opportunities, and dreams of a new future.

Related News
01/07/2013
The gender dimension of the Millennium Development Goals Report 2013
21/02/2017
From where I stand: “Fed up with the harassment, I appealed to the media”
14/10/2013
Reaching out with public services across rural Moldova
11/10/2022
Leaving no girl behind in education
26/08/2021
Young women entrepreneurs from Moldova support the local market with healthy lifestyle-promoting businesses
END_OF_DOCUMENT_TOKEN_TO_BE_REPLACED