Reaching out with public services across rural Moldova

A chain of information and services bureaus beckons hope for many across the villages of Moldova. These bureaus that have been addressing the needs of women and men, particularly marginalized communities and those in rural areas, recently received a new boost. The Government of Moldova adopted a new regulation to secure funding that allows future expansion of the existing 19 bureaus to all 32 districts across the country.

The Joint Information and Services Bureaus, or JISBs, as they are popularly known, enable the local public administration to address the needs of the most vulnerable and promote their economic empowerment. From offering advice on the job market, to healthcare, agriculture and land laws, the innovative “one-stop shop” model has so far helped more than 10,000 women and men, 85 per cent of whom are in Moldova’s countryside.

The project was initially launched in 2010, in four pilot districts: Singerei, Telenesti, Nisporeni and Cantemir. Today it functions in 19 districts, with three new bureaus opened recently in September 2013 in Drochia, Falesti and Stefan Voda. While they officially opened recently, the work there had begun in early 2013, with mobile teams providing services on a regular basis for those living in remote villages, including women with small children, as well as the disabled.

For many, these bureaus open up new opportunities, and better income. 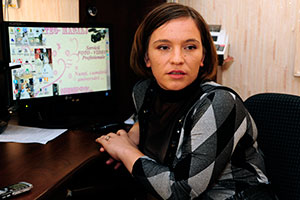 Ludmila Galbura opened her own business that provides translation services after seeking assistance from the Joint Information and Services Bureau in her district.

Ludmila Galbura is a young unemployed mother from Telenesti, a city in central Moldova, who wanted to start a business with her husband. After consolidating her business idea, she visited the Joint Information and Services Bureau in her district to learn how to take the first step: developing a business plan and a project proposal to apply for a start-up grant. The young family won the grant and opened its own translation business soon after.

“In Telenesti, there were no translation bureaus and no one provided this type of services. Our business became very popular among local residents and boosted our family income,” said Ludmila.

The new regulation on the Joint Information and Services Bureaus (JISBs) was adopted on 6 September 2013, as a result of joint efforts by the Ministry of Labour, Social Protection and Family, and UN Women. It institutionalizes the bureau model and enables it to expand nationwide. The bureaus will cover all 32 districts of the country by 1 January, 2014. The budget allocation includes transportation costs for mobile teams and Internet access for using the information system developed by the E-Government Centre in partnership with UN Women.

“The establishment of JISBs represents a unique and efficient model for local public administration, because it does not entail the creation of a new structure or recruitment of additional personnel,” said Ruxanda Glavan, Deputy Minister of Labour, Social Protection and Family. 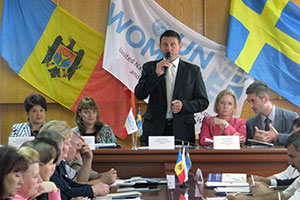 Established with the support of UN Women and funding from the Government of Sweden, the Bureaus centralize at least nine key service providers in one office, improving access and reducing time spent lining up in multiple queues in various locations.

“The JISBs will bring municipal services closer to citizens, and will empower them and make local authorities more accountable. That is local democracy,” said Ambassador of Sweden to Moldova, Ingrid Tersman, at the launch event of the three newest bureaus in September.