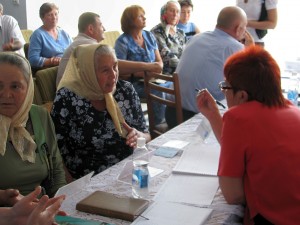 Information about safe, healthy employment can be scarce for Moldova's women, especially for those living in its large rural areas. Many women still work in the informal sector and rely heavily on their families and their husbands for physical and financial security.

For many, information about their land rights or social entitlements can be equally elusive, leading to a host of vulnerabilities, and inequalities.

Yet a series of bureaus, or help centres initiated by the government has broadened the path of some women to choice, and to change. Joint Information and Services Bureaus now unite more than nine service providers in one office location, and with the support of UN Women and funding from the Government of Sweden, have been designed to reach out to women in the community.

Currently spread across five districts - Singerei, Telenesti, Nisporeni, Cantemir and Ungheni - the Bureaus offer advice on issues ranging from the job market and social protection, to agriculture and land laws, using a “one-stop shop model. And while this supports entire neighbourhoods, its impact has been felt most by groups who were once most isolated, and farthest away from information. More than 1500 female clients have used the Bureaus since their establishment in 2010, 80 per cent of whom live in Moldova's countryside.

For many, this has led to choices that promote sustainable alternatives, and better savings. Emilia Bazi is a grandmother of eight from Singerei and works in agriculture with her husband. After starting a greenhouse project in 2010, she visited her district Bureau to learn about irrigation systems. “I now have a modern drip irrigation system in my greenhouse," she says. “It allowed me to save time and energy."

At the broader level, the centres are helping to erode barriers to women's economic advancement. The “one-stop model has resolved hours of queuing in front of different service providers, while mobile services operate to the furthest villages. By working with local public authorities throughout the service-design process, and continuing to train Bureau staff, UN Women has ensured that they respond to the needs of women and girls.

With this information at their fingertips, female clients are reporting greater motivation to pursue education and carrier opportunities, and become more involved with Moldova's development.

The success of the project has led to proposals for its expansion across the nation and beyond. A draft regulation on the country-wide rollout of the programme is pending with the government, and Bureau running costs were included in the draft state expenditure framework for 2013-2015. Meanwhile, with the support of UN Women, the “one stop concept is beginning to take root and grow in neighbouring Tajikistan too, opening windows of opportunity for women along the way."