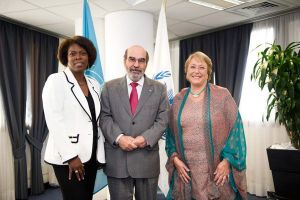 During the first meeting, with the heads of the Rome-based agencies, Ms Bachelet reiterated that the joint programme is a priority. It is an opportunity to deliver real results and to serve as a model for “delivering as one, she said.

All the agency heads re-affirmed their commitment to the programme and agreed to launch it in New York during the UN General Assembly in September and in Rome on the International Day of Rural Women on the 15th of October 2012.

A joint fundraising strategy was also agreed. A meeting was scheduled with representatives from the Resource Mobilisation Units of all four Agencies, to discuss how to move forward on fundraising.

The Permanent Representatives applauded the commitment to working together and building on the comparative advantage of each individual agency, to implement practical actions and deliver results for the empowerment of rural women.

ED Cousin reiterated her commitment to advancing gender equality and partnerships, emphasized the collaborative advantage of the four agencies and noted that “together, we will achieve the goal.

This 5-year joint programme is aimed at economically empowering rural women. It will be implemented in Ethiopia, Guatemala, Kyrgyzstan, Liberia, Nepal, Niger and Rwanda. WFP is the Lead Agency for the Joint Programme in Guatemala and Rwanda.