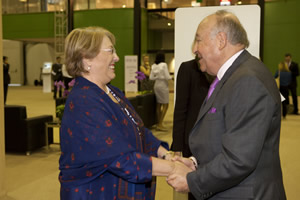 On the sidelines of the Rio+20 Conference this week, UN Women and the Latin American Development Bank (CAF) signed an agreement with the aim of strengthening the work developed by both organizations in the area of poverty reduction.

In recent years, Latin America has achieved significant gains in poverty reduction. However, there is still a persistent social debt with regard to the levels of inequality. To address this and to integrate a gender perspective in the reduction of wealth gaps, the two organizations will work closely together.

The agreement was signed by Michelle Bachelet, UN Women Executive Director, and Enrique Garcia, Executive President of CAF. “The feminization of poverty has led to an increasing material impoverishment of women, a worsening in their living standards and the infringement of their fundamental rights, said Ms. Bachelet. Noting that women's economic empowerment is one of UN Women's strategic focus areas, Ms. Bachelet also highlighted that the agreement will facilitate. “It will allow the starting of programmes that support women, particularly in the establishment of small and medium enterprises, access to microcredit and financial literacy, so they can be agents fighting against exclusion she said. 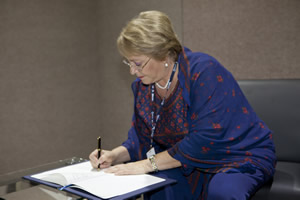 The Executive President of CAF said that the agreement “is inserted in CAF's strategy of promoting initiatives that foster greater equality and social inclusion with a gender focus, either through the generation of knowledge or through direct work with women, to reinforce their social, human and productive capital.

This new agreement is framed within the strategic alliance between UN Women and CAF to generate synergy among the public and private sector, multilateral cooperation and civil society, with the purpose of attaining the objective of improving the quality of life of Latin Americans, particularly those most vulnerable.