It takes courage: Ethiopian girls speak out against arranged marriage. The story of Fetura Mohammed 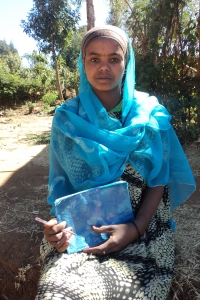 Fetura Mohammed, now 16, took her case to the district court when she was 14 to prevent her early marriage. (Photo: ActionAid Ethiopia/Efratan Gizaw)

In the Genda Oromo village of the Kombolcha district in Ethiopia, 14-year-old Fetura Mohammed was appalled to learn that her father had arranged for her to marry an older man.

“I was shocked when I heard his plan because my only intention was to complete my education and have my own job before getting married," said Fetura, adding that she was well aware of the “physical and psychological health injuries that girls who marry at their early age would face and the existence of a law that protects girls from early marriage.

Fetura learned about her rights and the laws that aim to protect girls like herself through a school-based club that raises awareness among students around harmful traditional practices (HTPs) such as child marriage, female genital mutilation and polygamous marriage, which are prevalent where she lives. According to the traditions of her community, being unmarried at 16 or older is considered a serious taboo and brings shame and disgrace to the girl and her parents.

But Kombolcha is home to one of the Local Rights Programmes (LRPs) where ActionAid Ethiopia, a grantee of the UN Trust Fund to End Violence against Women (link), is promoting knowledge among women to help tackle child marriage and other forms of harmful traditional practices. The programme also provides information about legal provisions and helps women get organized into watch groups. Through these watch groups, women have been taking collective action to raise public awareness around child marriage, identifying such cases, and facilitating the legal redress, in collaboration with traditional or religious leaders, school clubs and local institutions.

Fetura tried hard to persuade her father not to push her into marriage and allow her to finish her schooling, but his response was categorical: “teaching a girl has no merit." Led by frustration, she took action on her own, informing friends who were members of the Anti-HTP club and her teachers. The school principal's interventions failed, as Fetura's father insisted that he had the right to do as he wished with his daughter.

Her teachers then joined with other women's watch groups and local leaders in the Kebele, who took the case to the district court. Fetura bravely testified against her father, who was informed by the court of girls' rights to education and to lives free from violence, the legal age for marriage, as well as the legal consequences of child marriage. He was finally convinced and allowed her to continue with her education.

Since the beginning of the ActionAid project in 2009, a total of 655 women have been trained and organized into 78 watch groups in 10 districts of Ethiopia. In Kombolcha, the 17 women watch groups engage with local leaders, school clubs and law enforcement agencies for the elimination of child marriage, questioning the religious and traditional beliefs that are used to justify it. As a result, some of the male traditional leaders that used to tolerate the practice are now working towards its eradication, playing a crucial role as agents of change.

Sheik Mohamed Hassen, a Muslim leader in Kombolcha District, used to perform child marriages without verifying whether the woman had reached the age of majority, something that has completely changed, as he affirms: “The first thing to be asked is the age of a girl. If she is under 18 years, I don't allow the mar­riage. I identify the age by requesting her school card if she is a student, or if there is no such evidence I ask the parents the time she was born. Then if she is above 18 years and willing to marry the man, I allow the marriage."

In schools, ActionAid supports Anti-HTP clubs to enhance the role of boys to challenge child marriage. The clubs collaborate and engage with the school administration, women watch groups and the local police in identifying arranged child marriages, especially among girls who have been attending school, and supporting the process for legal redress.

“I am advising my friends not to quit their education and defend their rights by taking courageous action like I did," says Fetura, who is now 16 and is studying in the school built in her village with the support of ActionAid. “I have also started to actively participate in boys' awareness creation events that are supported by ActionAid to fight early marriage, violence and other forms of harmful traditional practices against women and girls because I don't want to see what was about to happen to me happening to my sisters and friends. Thanks to ActionAid, boys are now also with us fighting for our rights."

Like Fetura, other girls in the 10 districts of Ethiopia where ActionAid works, are standing up for their rights and taking action to end child marriage and other harmful traditional practices in their communities. They know it takes courage, but they also know of the support from their communities, and that the time is now for a definitive end to child marriage.

Q&A with Muluken Arefaine on addressing child marriage in Ethiopia

Related News
31/08/2016
Religious leaders at the forefront of ending gender-based violence in Ethiopia
10/10/2012
Five Questions for Muluken Arefaine on addressing child marriage in Ethiopia
10/10/2012
Q&A about the efforts of Kumbukani Mwanyongo to confront child marriage in Malawi
17/06/2022
From where I stand: “I see positive change through the power of women’s organizations and adolescent peer groups in our community.”
20/05/2021
I am Generation Equality: Martha Clara Nakato, advocate for bodily autonomy and sexual and reproductive health rights in Uganda
END_OF_DOCUMENT_TOKEN_TO_BE_REPLACED