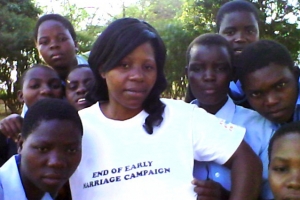 A peer facilitator talks to Say NO - UNITE about her work to educate girls about their rights and overcome their fears over the consequences of speaking out against child marriage. Photo credit: Kumbukani Mwanyongo

Kumbukani Mwanyongo is 24 years old, unmarried, and an aspiring pharmacist from Malawi. She is also a member of the Malawi Girl Guides Association and a trained peer facilitator working to educate others about girls' rights. Globally, more than one in three young women aged 20-24 years were first married before they reached age 18.

Malawi is a signatory to the Convention on the Rights of the Child, which considers anyone under the age of 18 as a child. On the occasion of the first International Day of the Girl Child on 11 October 2012, the United Nations is focusing on the issue of child marriage as a fundamental human rights violation. Say NO - UNiTE spoke to Kumbukani about her experience working to end child marriage in Malawi.

When you meet with young girls and start talking about marriage, do they speak freely?

Yes they do speak freely more especially those that have never got married both in and out school and those divorced. Those married fear to expose marriage issues because of our culture.

What are the cultural expectations about marriage in your community? Is it hard for girls to go against them?

Our culture expects that in a marriage the wife respects the husband and does all the household chores, while keeping all issues to do with the marriage to herself. Decisions are made by men and not by women, hence they are voiceless. But the main problem in Malawian culture that is a contributing factor to early marriage is the expectation of wealth from LOBOLA; which means marrying a girl child for money, cattle and other wealth. Therefore, it is hard for girls to go against all this because they fear losing their marriage, or being beaten by their husbands or even being disowned by their parents. They also fear being chased off and laughed at by friends if they do not get married early.

Do families ever ask you to drop the topic of child marriage?

Yes they do because they say I just want to end their children's marriages; they say I am jealous, I want to teach their children to be rude to their husbands and have parents make them prostitutes instead of getting married. They ask why I am not married; is it because men do not propose to me and that's why I choose to do this campaign? Some say they are not ready to pay back the bride price received from their in-laws when they want to send their young girls who are married back to school.

What is the Malawi Girl Guides Association doing to stop child marriage?

The Malawi Girl Guides Association is working on addressing violence against girls as part of the World Association of Girl Guides and Girl Scouts global campaign, ‘Stop the Violence: speak out for girls' rights'. As part of a joint programme for adolescent girls supported by the United Nations Foundation, The Malawi Girl Guides Association ran a successful ‘Stop Early Marriages' campaign. Through Girl Guide units, the Association works with adolescent girls to empower them and educate them on their rights with respect to early marriage. They Girl Guides are also running workshops with community members and leaders to raise awareness about the harmful effects of early and child marriage on the lives of girls.

How successful have you been in your work with these girls on child marriage?

Girls realize their rights and they wish to continue schooling rather than getting married early and suffering the expectations of the culture that seems to favour men. Girls who were forced into marriage and are now divorced with children are now coming and opening up and encouraging other girls not to rush into or follow their parents' wish of marrying them off early because marriage can wait while school cannot. Since it is a rural community I am becoming a role model for many girls since they are seeing me succeed in education.

Related News
17/09/2015
Malawi Chief annuls 330 child marriages
11/02/2013
Abolishing Sang Chatti: Pakistan works to prevent compensation marriage and other forms of violence against women
05/02/2013
In Tanzania, a caravan of activists visits five regions over eight days on a journey to end violence against women
10/10/2012
It takes courage: Ethiopian girls speak out against arranged marriage. The story of Fetura Mohammed
28/04/2021
Take five: Young women leaders in Malawi are ready to build back better from COVID-19
END_OF_DOCUMENT_TOKEN_TO_BE_REPLACED